The Pac-12 media days are done. All that's left before the start of the upcoming football season are those pesky preseason practices. What a bore. I'm joking, of course, but the rest of this post won't be humorous, I promise. It's about the Cougars' quarterback situation, sure, but it's mainly about the one guy who really matters on the depth chart, senior Connor Halliday. Read on.

The one thing I've always been surprised about in my more than 30 years reading or writing about Washington State football is the vitriolic nature of the fans' relationship with the starting quarterback. I remember it when Ryan Leaf was young. I remember it throughout Alex Brink's career. It was the same way with Jeff Tuel. And now with Halliday. Except there is something different with the latest guy. It's less a fan thing than a media thing. Cougar fans have seemed to embrace Halliday, though there were a few calls early last season for the now-departed Austin Apodaca to get a shot. Then Apodaca had a chance and it wasn't all that pretty. Halliday, who had been dinged up, returned and the hubbub settled down. Now, with Apodaca gone and highly recruited freshman Tyler Bruggman also out the door, Halliday is firmly entrenched as the starter and as the fans' choice. But he's not getting much love from football folks around the nation and I don't (completely) understand that. I look at Halliday's stats from last year and can't understand why a senior, in Mike Leach's offense, isn't all over every watch list in America. Let's recap. Halliday threw for a school-record 4,597 yards last year (the third-best total in the nation), completing 62.9 percent of this throws. He tossed 34 touchdown passes, tying Leaf's school record. He averaged 354 yards a game and had an efficiency rating of 126.52. Those stats, for a junior, would seem to scream out award-winning senior season. But, as the season gets ready to start, Halliday isn't on the Maxwell Award watch list though seven Pac-12 quarterbacks are, including Kevin Hogan of Stanford, Cody Kessler of USC and California's Jared Goff. So what's the deal? 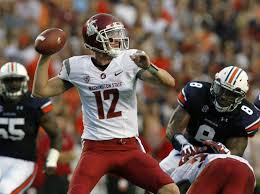 • OK, we know what it is. Halliday threw 22 interceptions last season, the most in the NCAA FBS ranks. That number stands out to everyone. It's way too high. Not good. A black mark against his name. But should it be? As Mark Twain said, there are lies, damn lies and statistics. Or something like that. Statistics are great but you have to look at them in total, not in a vacuum. Halliday's yardage numbers are incredible, sure, but he did throw 714 passes, the most in the Pac-12, while piling them up. The same can be said of his interception numbers. Every time a quarterback throws the ball, it has a chance of either falling to the ground, incomplete, or being caught by the correct team or being intercepted. When comparing quarterback A to quarterback B, percentages are what matter, not the raw totals. And yes, Halliday threw too many interceptions. He will tell you that. As will his coach. But over the course of the entire season, he averaged one interception every 32.5 times he threw a pass. That's not low enough, sure. Oregon's Marcus Mariota, who might be bionic, averaged one interception every 96.5 passes. That's incredible. But Halliday's numbers were better than those posted by Stanford's Hogan, who was picked off once every 29.5 attempts. And Hogan is considered a key element of the Cardinal offense. And consider this. In Salt Lake City, the Utah Utes have been celebrating the entire offseason because quarterback Travis Wilson has been medically cleared to play. He's expected to be their starting quarterback. He's considered their best. And he threw an interception every 14.8 passes last season. If Halliday had been intercepted at that rate he would have thrown 48 picks. Yikes. What's really interesting about Halliday's interception numbers, 17 of the 22 came in the first eight games. In the final five, Halliday threw just five picks in 286 attempts. That's one for every 57.2 times he threw a pass, a number, if he could have posted it for the entire season, would have been second-best in the conference. Arbitrary points are easy to dismiss, but in Halliday's case the one we choose corresponds with the Cougars first bye of the season. The week off allowed him to heal up – a bit – from a number of nagging injuries that plagued him over the offseason and throughout the first part of the year. After the Oregon game, the Cougars had two byes in three weeks. It really helped Halliday's health, and the numbers reflect that.

• So what's ahead for Halliday and the Cougar passing offense? With the loss of Apodaca and Bruggman, the first order of business is to keep Halliday healthy. If the rebuilt offensive line can do that, with the receiving corps WSU has returning – the eight top receivers are back – then the offense should reach heights never before seen in Pullman. And, if Halliday continues the run he was on the final five games of last season – he completed 176 of 286 passes for 1,799 yards, with 16 touchdowns – especially as it related to the interceptions, then the WSU offense should be darn-near unstoppable. And a heck of a lot fun to watch. If that does occur, expect Halliday's name to begin to emerge among the national award lists. As it should.

• That's it for today. As we said yesterday, we have some personal business to take care of early this morning. We'll be back tomorrow with our usual post.