Paul Simon once wrote about one man's ceiling being another man's floor. I always felt that had great application in the world of sports. Read on.

• You remember Paul Simon, don't you? He was just in the news. If you are older than 35 you might even remember a few of his songs, both with boyhood chum Art Garfunkel (pictured together from back in the day) and without. Anyhow, Simon is a gifted songwriter, a poet of sorts. And the floor/ceiling line is so apropos of sports. Take the first round NHL playoff series between San Jose and Los Angeles. The Sharks roared out to a 3-0 lead and the fans in the Bay Area were celebrating another soon-to-be elimination of another LA sports team. And then the bottom fell out. The Kings, league champions a couple of years ago, chipped back, winning game four at home to stave off elimination, game five in San Jose to make it nervous time, game six back in LA to set up last night's game seven. And the Kings reigned, 5-1. That's their ceiling, only the fourth time in the NHL's history a team has rallied from a 0-3 deficit in a seven-game series. And San Jose had hit the floor. It was called an epic collapse. Or a historic comeback. It just depends on which floor you are on. 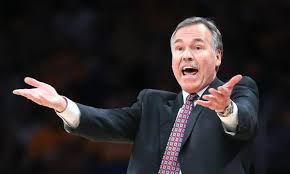 • Speaking of floors, Mike D'Antoni (pictured) resigned as coach of the Los Angeles Lakers yesterday, ending one of the sorriest chapters in the storied franchise's history. Talk about a terrible fit. D'Antoni, who stresses the pick and roll and spreading the court, tried to impose his system on a team without the talent to run it. Not smart. Wait, that's not fair. It wasn't smart to hire him in the first place. That was the dumb move. He was put into a position in which he could not succeed. And the Lakers hit rock bottom. But don't be surprised if LA ends up with one of the top two or three picks in the draft after the NBA lottery is held this month. To paraphrase William Munny, Los Angeles has always been lucky that way.

• WSU: Speaking of lucky, I was lucky enough to find a Washington State link today, a story from ESPN.com's Pac-12 blog on the defensive line.

• Gonzaga: It looks as if the Zags will only lose one women's basketball recruit. Tom Clouse has checked with each of the letter-of-intent signees and all are coming to Spokane except Lexi Bando. ... The Bulldog men are pretty high in this person's Top 25 for next season.

• Chiefs: Mitch Holmberg came close but didn't win either of the WHL awards for which he was a finalist.

• Shock: The Shock will be in the LA Basin this weekend for their first meeting with the Kiss. Jim Meehan has an advance look in his weekly notebook.

• Preps: There is a lot of high school news in the newspaper, which is appropriate as it is Thursday. (It is, isn't it? I get confused easily these days.) After all, Thursday is Prep Page day. Greg Lee has his track notebook, a story on the revival of a local invitational meet, the area leaders and a column on Gonzaga Prep senior Kayla Leland (pictured), who will be hard for the Bullpups to replace. ... Jim Allen was at a crucial 4A GSL soccer match yesterday. ... Tom Clouse has a feature on Ferris' standout catcher, Alex Jondal.

• Seahawks: General manager John Schneider met with the media yesterday and had a lot to say. Terrelle Pryor's status came up – he's still a quarterback and the Hawks believe Pryor (pictured) is worth the low-risk gamble they took – as did Sidney Rice, James Carpenter and the importance of this month's draft. ... Robert Turbin may be a backup but he has a family history that helps start him up.

• Mariners: Rain, rain go away, come again some other day. That other day was yesterday in the Bronx and the M's game with the Yankees was postponed until June 2, when Seattle will have to make a special trip to New York to get it in on what was an off-day. Great. ... Mike Zunino found a four-hit day is a great way to settle his nerves. Meanwhile, Brad Miller is hoping a few days off have settled his.

• Sounders: Yes, it's been the stars that have shined but it's been unsung heroes that have helped Seattle ascend to the top of the MLS. ... Philadelphia comes to the Northwest this Saturday.

• Another nice day in store for us today, right? I guess I can't put off the yard work any longer. Until later ...