Want to know what the dumbest statement in all of sports is right now? "If they win out." Using the term in relationship to college football is just plain silly. Nobody "wins out" anymore. Well, except maybe one team. Read on. 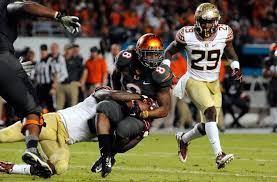 • The "win-out" talking heads took a body blow yesterday and, yes, I know that is mixed metaphor. But the silly notion that tomorrow is going to be the same as today is all mixed up anyway. Mississippi State was in the driver's seat for the playoffs and Zak Prescott was going to ride all the way to New York and the Heisman Trophy. "If they win out." They didn't. The Rebels were upended by Alabama, 20-15 and Prescott threw three interceptions, all in Crimson Tide territory. That's no way to win a Heisman trophy, that's for sure. Oregon is a for sure pick for the four-team playoff, right? "If they win out." But the Ducks were locked in, it seemed, because they were going to be playing a one-loss Arizona State team in the Pac-12 title game. That would be a de-facto quarterfinal game. "If they win out." The Sun Devils didn't do their part, playing like they usually do in the Northwest cold last night and losing to Oregon State 35-27 in Corvallis. (As an aside, poor WSU. They struggle in Tempe usually anyway and now they are going to be facing an ASU team ticked off after last night's defeat. Plus, the Sun Devils will need to win out to have any chance to win the South.) So Oregon's chance for a high-profile win in the conference title game is probably gone. But that's better than losing when you win. Such was the case for TCU yesterday. The Horned Frogs were fourth in the CFP standings last week and seemed destined to stay ahead of Baylor – which is in line to win the Big 12 title ("If they win out") due to their head-to-head victory against TCU – and earn a spot. "If they win out." Or, in TCU's case, barely win against a disrespected Kansas team, which is what happened yesterday. With the way the weekend went, the only team that seems sure of winning out is the team no one wants to finish undefeated, Florida State. The Seminoles trailed Miami last night for almost the entire game. But, as the third quarter wound down, they seemed poised to get back in the game. Until Jameis Winston, last year's Heisman winner and this year's scapegoat for all things awful about college football, threw an ill-advised pass into triple coverage. A season-killing pick? Nope. Miami's linebacker slapped the ball into the air and it came down in the arms of another FSU receiver, who took the gift into the end zone. From there, Florida State took over and earned a 30-26 win. It looks as if the Seminoles are going to get the chance to win back-to-back national titles. "If they win out."

• The Big Sky also looked to be in a huge logjam going into the weekend's game and everyone was doing their "if they win out" scenarios. What a waste of time. Three of the four one-loss teams played yesterday – Eastern Washington had a bye – and two of them lost. Northern Arizona had a seemingly clear path to the league title but lost at 3-7 North Dakota. Idaho State had seven-point halftime lead, was facing Montana State's backup quarterback, and still lost 44-39 at the Bobcats. So Eastern and MSU are the only two teams left with one conference loss. "If they both win out," the Eagles will take the league's automatic NCAA berth, courtesy of their non-conference win in Bozeman earlier this season.

• WSU: The bye week is over. The Cougars practiced yesterday in their bubble, risking their ankles on the hard surface but saving their digits from the cold. Jacob Thorpe has a practice report and a morning post with links. ... I think I read this exact same column after the Cougars' bowl game last year. Well, not the exact same, but close. ... Bud Withers shared some thoughts on the weekend. ... We learned some things this weekend. ... Maybe the Andy Enfield (pictured) experiment at USC is not working. Or maybe it's because the Trojans are really young. Whatever, I watched their game with Portland State last night on TV and I didn't see the explosive offense Enfield was supposed to bring to Los Angeles. Nor did I see a team that seemed interested in playing defense. The Vikings won, 76-68.

• Gonzaga: Jim Meehan had a blog post yesterday morning looking back at the overpowering win over Sacramento State.

• EWU: OK, so the Eagles had a bye this week. That doesn't mean there wasn't a lot of Big Sky action. ... As we mentioned earlier, Idaho State went into Bozeman and lost. ... The same can be said of Northern Arizona at North Dakota. ... Cal Poly lost for the second consecutive week while Weber State won for the second week in a row. ... Portland State, Eastern's final regular-season opponent next Saturday, lost at Sacramento State 48-41. ... Montana stayed in the postseason hunt with a 35-17 win at Southern Utah.

• Idaho: Silly me. When I picked the college football games on the radio this week, I figured the Vandals would want to send their seniors out in style. Instead, they seemed to say "get lost" against a poor Troy team. John Blanchette has the story and a blog post behind the Vandals' 34-17 Senior Day defeat.

• Whitworth: There wasn't much of a doubt if the Pirates would win their season-opening basketball game. It was just the final score that needed to be determined. That would be Whitworth 103, D'Youville 49. Jim Allen has the story. ... There is also some cross country news.

• Chiefs: Aren't the Chiefs supposed to always be fired up to play their rivals, the Tri-City Americans? It doesn't seem as if that was the case last night, as they seemed to sleepwalk through a 5-3 loss at the Arena. ... Everett earned another win, defeating Kamloops in a shootout.

• Preps: The State volleyball titles were decided yesterday and, as usual, Colfax won another crown. ... Central Valley picked up its first trophy. Chris Derrick was there and has this story. ... In soccer action, Mt. Spokane was eliminated from state title contention by a late goal. Jim Allen has the story. ... There were also three football games in the area, with Greg Lee covering the two at Albi. He has this story from Shadle Park's win as well as this piece from Mt. Spokane's romp. The third game? That was at Gonzaga Prep and yours truly wrote this story while Colin Mulvany stood in the cold and took these photographs.

• Seahawks: Despite all their injury woes and a tougher-than-expected first nine games, the Hawks fly into Kansas City this morning with everything they hope for still there for the taking. ... They are an underdog today for the first time in a while. ... Will Marshawn Lynch talk afterward? If he doesn't, it will cost him. ... That's not the main worry with Russell Wilson. ... The numbers don't lie. The Hawks defense isn't as good this season. ... Who will win? If it cheers you up, I picked Kansas City and you know how well I've been picking this season. ... You have a lot to watch today.

• Mariners: Let's hope this doesn't portend an injury-riddled season. Robinson Cano was hit by a pitch this week in Japan and suffered a broken toe. He's going to have to sit for a while.

• Sounders: The franchise held its annual business meeting and revealed some off-the-pitch news. ... DeAndre Yedlin is headed back after his national team stint.

• Want to know something cool? Yesterday I tweeted a few updates from the Gonzaga Prep football game. Steve Gleason read them. And responded. I love social media at times. (Though I don't love that TweetDeck continually changed "Bullpups" to "Bullpen," something this on-line app just did as well. I caught it three or four times but missed the final one.) I met, and had a chance to talk with, Steve when I was covering WSU. He came to Pullman to raise the Cougar flag and speak about his charity. I got to know his mother there as well and came to like her very much as well. Not only was she a well-liked academic advisor, but it's obvious she was a great parent as well, seeing how courageously her son is battling the disease that is sapping his life. I stand by a statement I made earlier this year: I think Steve Gleason should be remembered as the Cougars' all-time greatest player, not for what he did on the field but for the lessons he's taught us all the past few years. That's so much more important. Thank you Steve. Until later ...