A GRIP ON SPORTS • Could it happen? Could the Mariners actually make something of this godforsaken season? Probably not but it would be just like them, after we’ve lost all faith, to tease us with a tantalizing stretch run. Read on. 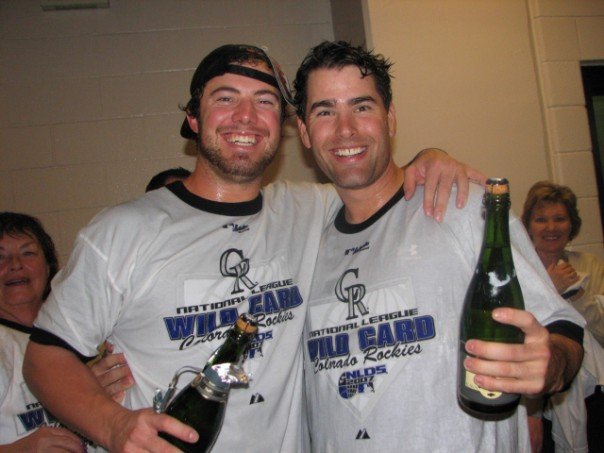 • Can you remember all the way back to 2007? Seth Smith can. The M’s outfielder made his debut in September of that season. Right in the middle of the greatest stretch run this side of the Miracle Mets. Smith’s first major league game came for the Colorado Rockies while they were in the midst of winning 14 of their final 15 regular season games. (Actually, Smith’s call-up on Sept. 16 coincided with the beginning of that stretch.) They were 76-72 when he joined them, went on the incredible tear and rode it all the way into the World Series – where they were swept by the Red Sox. Could something similar happen to the Mariners? No. Unless ... OK, “no” is a better answer without the “unless.” But let’s examine what’s been happening lately. The team is starting to hit. Yes, it coincides with Ketel Marte and Jesus Montero joining the lineup, but they are just part of it. Robinson Cano has been hitting. Mark Trumbo, he of an average somewhat akin to his weight, has grooved his stroke and is on fire. Others are chipping in at opportune times, like Austin Jackson, who had the game-winning hit in the 10th inning last night. The M’s have won 7 of their last 11 games. If they win today, they will have won three consecutive series. All of those facts are positive. But there are too many negatives to overcome. How about the bullpen? It’s still a landfill fire (which would be bigger – and more enduring – than a dumpster fire). Jackson’s heroics wouldn’t have been needed last night if the bullpen had done its job and preserved a late lead. But it hasn’t done it all that often this season so why would we think it would change now? Because it will have to if the M’s are to jump over eight teams (yes, eight) to make the playoffs as the second wild card. Heck, if the M’s are 21-7 in September (as the Rockies were in 2007), they would still need help to make the playoffs. But we are still in August, which brings up a point. The M’s have two young pitchers in their rotation now (and a converted reliever). One of those youngsters is Taijuan Walker, who had a decent outing last night (two runs on five hits). It took him 101 pitches, though, to get through six innings and that highlights a dilemma. They don’t want the 22-year-old (he turns 23 tomorrow) to throw too many innings this season. He’s at 135 already. Don’t expect him to go past 175. Lefty Mike Montgomery might also be limited. So where does that leave the M’s if they get back in the chase, especially if only peripherally? They will have to find someone else to start, which seems to be a dilemma because they can’t even find a fifth starter right now. Oh sure, James Paxton, the Sasquatch of their rotation, should reappear at some point, but that is only one spot. No matter what, it will be a patchwork rotation the rest of the way – or the M's will lean heavily on an already overtaxed bullpen. Maybe it will work, maybe it won’t. But even if the M’s keep winning at the rate they are now – or at the rate the Rockies did eight years ago – turning this negative of a season into something positive is still a way-too-heavy chore.

• WSU: Speaking of heavy chores, Jacob Thorpe has one right now, dealing with the heat of Lewiston as well as covering preseason camp with the Cougars. It’s days like today that make me glad I’m retired and I don’t have to do that anymore. Jacob turned his attention to the folks that keep the players hydrated with this right-on-point feature. He also has video interviews with Gunnar Eklund (who, along with Joe Dahl, are the main subjects of this CBSsports draft piece from Rob Rang), Marcellus Pippins, Gerard Wicks, assistant coach Clay McGuire and coach Mike Leach. Plus there is the practice summary and morning links on the blog today. Jacob will also hold a live chat today. ... Jon Wilner gives you a rundown on how the AP poll works while Pac-12 analysts talk about Vernon Adams and the Ducks. ... It seems no one expects this to be a banner year for the WSU volleyball team.

• Indians: Spokane is getting hot at the right time, with its 7-5 win over Tri-City last night pulling it into a second-half tie with the Dust Devils, a game behind Everett. Tom Clouse has the game story.

• Seahawks: Marshawn Lynch is at that age. Actually, he’s 29, something of kryptonite for NFL running backs. But is he Superman? In this analogy, hopefully not. And guess what? He is actually happy right now. ... The Seahawks’ defensive backfield will look somewhat different Friday night in the preseason opener. One of those who will see more time is holdout Kam Chancellor’s half-brother Keenan Lambert (No. 2). ... Some observations from camp.

• Mariners: The M’s led 5-2 in the eighth inning but that wasn’t enough. They won 6-5 thanks to Jackson’s line drive down the right-field line. ... Speaking of the bullpen, effective left-hander Charlie Furbush is still a ways away from being ready to come back from his injury. ... Trumbo has really turned it on lately.

• The best comment I received yesterday concerning my thoughts on Vernon Adams? It came via email from Richard Halter. He took exception to my line about everyone winning south of the Washington/Oregon border. He’s an Oregon State fan. My bad. It was just another mistake I made Tuesday. ... No radio today. The M’s game is in the afternoon and I’m taking a short road trip to another state. I’ll have a summary tomorrow of all the wonderful things I see. Until later ...