A GRIP ON SPORTS • Fernando Rodney’s experience in Seattle is over. So is The Fernando Rodney Experience. I, for one (and possibly the only one) am sad to see the latter leave. Read on. 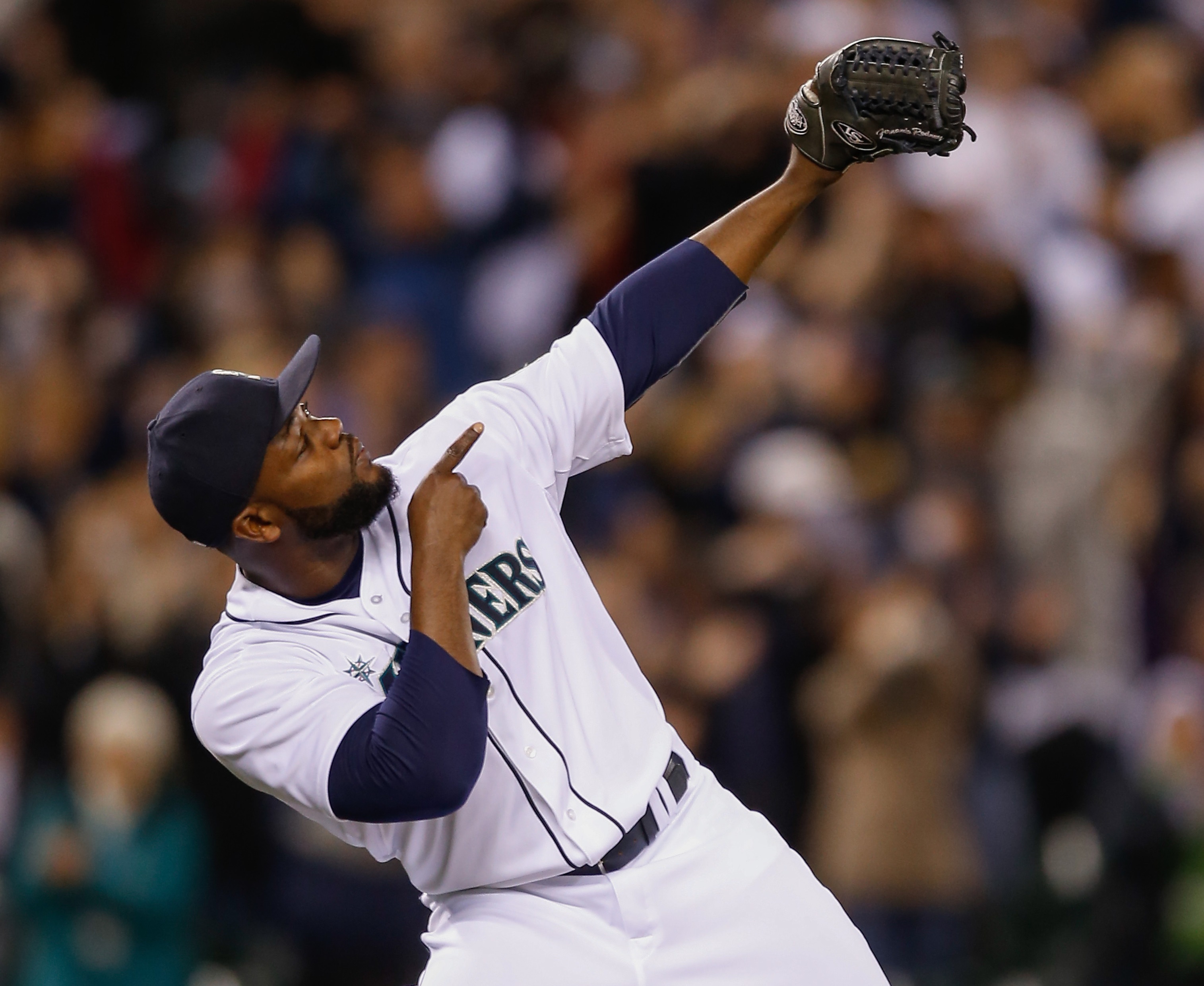 • Rodney, a veteran closer with more twerks than Iggy Azalea, was lights out for the M’s in 2014. Fifty-one times last season he was called on to close a game. Forty-eight times – the most in the American League and a Mariner record – he came through. He finished a league-high 64 games. Now, sure, how he did it was, at times, heart-attack inducing, but he still got the job done. Not so this season. Rodney, like the rest of the bullpen, seemed to drive off a cliff somewhere between last October and this March. His high-wire act included way too many falls, and the M’s didn’t have a safety net under him. When Rodney was dismissed from the closer role – he’s blown six saves this season in just 22 chances – Carson Smith did OK. At first. Not anymore. (See below for more confirmation.) And unless Rodney was in the closer’s role, his $7 million salary seems a bit outlandish. Though maybe not. Thanks to The Fernando Rodney Experience. It’s capitalized because, like a great thrill ride, it’s a capital idea. No matter what happened in a Rodney save situation last season, it was a fun trip. Oh sure, the bases may be loaded, the other team may have thought they had a chance, the crowd could be going nuts, but in the end it was OK. Rodney would throw six consecutive changes up followed by a game-clinching 97-mile-per-hour fastball and that would be that. His exploits were documented on Twitter and lamented by the beat writers. And still he got the job done. That’s the bottom line. That’s what made it fun. This year he didn’t and it wasn’t. Fun, I mean. Sad is a much-better three-letter description. His performances also served as the indicator species for the M’s pen. Without their closer on the back end, the front end fell apart. Or was it the other way around? I’m not sure. You could discuss that for days. But the circular nature of the argument has nothing on the consistency of failure of the guys who sit for the first five innings or so. This has been the worst year for a bullpen I can remember. Not just because it has been so bad. But also because it was supposed to be so good, the anchor tenant of our World Series-proclaimed super mall. Ha. Changes have been made all year. Out with one, out with another. Mid-level reliever I mean. Rodney has remained, not always in his usual role, but sitting in the bullpen, hat cocked to the side, an invisible quiver of arrows at his side. Not anymore. After last night’s 6-3 loss to the White Sox – the result of another pen meltdown – Rodney was designated for assignment. DFA’d in baseball parlance. A nice way of saying c-u-t. The circus is leaving town. But, like every circus, it will pitch its tent somewhere. Probably this year. And the M’s will save a few grand. But the rest of us will lose something. Entertainment value. Never forget when Rodney was at his best it was like a 2014 Range Rover, all shiny and new, promising successful end of the trip, even if the road was a meandering one. This year it was more like a rusty Fiat 124 Sports Coupe. It was fun to drive and it got you there – on occasion. More often than not, though, it broke down en route. And had to be towed.

• WSU: The Cougars scrimmaged yesterday. It was a win-win for everyone. The defense once again pressured the quarterbacks. The quarterbacks once again were nearly perfect – especially Luke Falk. Jacob Thorpe passes along the statistics and catches the dual nature of an intra-squad scrimmage in this summary of the day. He also kicks off his position previews with the defensive backs, maybe the key group in determining how this season will go. Oh, and Jacob has video interviews from after the scrimmage with Jim Mastro, Mike Leach, James Williams and Falk. ... Lest we forget, Jacob has a morning post with Pac-12 links. ... Oregon just may use two quarterbacks.

• EWU: The Eagles also scrimmaged yesterday. Jim Allen has this story which highlights the emergence of receiver Simba Webster.

• Horse racing: Tom Clouse has a feature today on a 6-year-old gelding which is on the verge of becoming the most successful Washington-bred horse ever. I wonder if old-timers (like myself) will tell you he’s no Turbolator.

• Shock: The Shock may be on its way out of the AFL but the league will go on. And continue to have controversial endings just like the one last night in which San Jose pulled out a semifinal win over Arizona on a disputed last-second score.

• Preps: The high school football season is about to begin around here, though Troy has to pass a levy first before the team can begin practicing. ... Central Valley’s Scott Peck has committed to Utah. (Full disclosure: I coached Peck in basketball one summer, which is probably what drove the offensive lineman to concentrate on football.) ... On the West Side, there are a couple of stories that shouldn’t be missed, including the Seattle Times’ investigative piece on Bellevue football. There is also this in-depth look at the state basketball tournaments and the finances involved from the Tacoma News Tribune.

• Indians: The smoke cleared yesterday in time for the Indians to get smoked by Vancouver, 11-3. Chris Derrick has the game story and a blog post on the crushing defeat.

• Seahawks: The Hawks’ running game isn’t clicking yet – Marshawn Lynch hasn’t played either – and may need an infusion of talent up front. But guard Evan Mathis left town without signing and Garry Gilliam needs to improve even more. ... Kris Richards is the youngest guy to run a defense in the NFL. • Mariners: Want to know why the M’s aren’t contending? The 6-3 loss last night included their 18th blown save and was the 22nd time they lost in the opponent’s final at-bat. The culprit here was Smith, who gave up a two-run lead in the ninth. ... James Paxton is scheduled to make a rehab start today. ... Joe Beimel knew something wasn’t right with his shoulder. ... The future isn’t now for this power hitter. It’s still a ways away. ... Boy do I remember this. It was right after the Watts riots and the combination of the two – remember, I was an 8-year-old baseball nut – made me feel as if the entire world was falling apart.

• Sounders: It’s getting late early for Seattle. The Sounders lost 2-0 at struggling Real Salt Lake last night, out-hustled and out-played. Now they are tied for the final playoff spot with the season winding down. It’s time – past time – to get a sense of urgency. ... The MLS is importing talent. And that's creating some buzz.

• If you are wondering why I picked a Fiat to highlight in my Rodney ramblings, it’s because that was my car in college. It was so fun to drive – when it ran. And when I got rear-ended by a guy in Porsche traveling less than 20 miles per hour, the whole car basically collapsed around me. You would think I would have only bad memories. But no. Like with Rodney, I choose to remember the good experiences. Until later ...