A GRIP ON SPORTS • As the sun rose this morning, the birds began chirping. Loudly. Maybe they had watched the Masters on TV yesterday and were trying to compete. Read on.

• It’s one of the rites of spring, isn’t it? Watching the Masters, listening to the birds around Augusta National sing their songs and wondering if CBS is piping in special effects. Being someone who has sat in CenturyLink with earplugs embedded deeply, I’m not going to accuse anyone else of magnifying natural sounds. I don’t think the Hawks do it – despite the occasional rumor around the league they do – so I’m going to give CBS the benefit of the doubt. Still, the bird noises can get annoying loud, especially on the on-line feed. One of the featured groups on Masters.com yesterday was Jordan Spieth’s, so I had that on my computer as I worked. It only took a few minutes of sparrows and robins and whatever else chirping away before I employed the mute button, though the announcers picked to call the action on-line also had something to do with it. The lack of sound didn’t curtail any of the enjoyment of watching an excellent golfer dice up an excellent course. It was precision over power. And even the birds seemed to enjoy it.

• Spring football rolls on in the area, with Eastern Washington hitting its stride as WSU passes the halfway point this weekend. The Eagles have to answer the most important question any college faces: who will be the quarterback? That’s the subject of Jim Allen’s story today and the answer may determine the course of the season. Eastern’s offense is usually one of the FCS’ best, but it wasn’t at the end of last season. A big part of that was the ineffectiveness of starting quarterback Jordan West. Though his season statistics were stellar, West’s last three games weren’t. And neither was the Eastern offense overall. So West is locked in a three-way battle with Reilly Hennessey and Gage Gubrud for the starting spot. The winner will be operating behind a new-look offensive line but will have the nation’s best wide receiver, Cooper Kupp, to throw to. And the keys to Beau Baldwin’s high-powered scheme. For EWU to be successful, the quarterback needs to be successful. Whoever emerges before the opener at Washington State will be crucial to the offense and Eastern’s season. 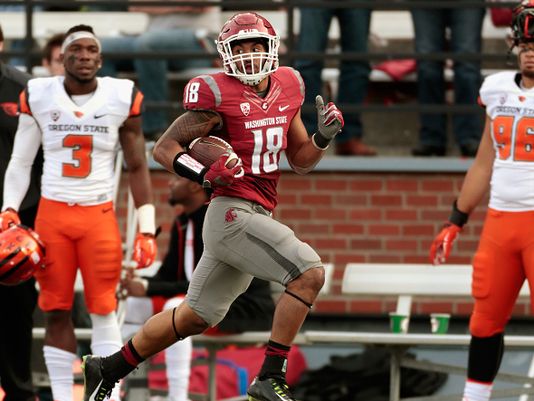 • WSU: Spring can mean many things in the Inland Northwest, including a beautiful high-70s type of day. Like yesterday. Jacob Thorpe documents what went on with this blog post and videos of interviews with Mike Leach, assistant coach Ken Wilson and safety Shalom Luani. ... Recruiting is picking up around the conference. ... There is some basketball news, including the resignation of a suspended California assistant coach and a look at next year’s conference race. ... And there is some baseball news as well, with Mt. Spokane graduate Drew Rasmussen out for the season at Oregon State and facing Tommy John surgery.

• Gonzaga: The Domantas Sabonis news was covered by just about everyone from the Northwest to all around the country.

• EWU: As we mentioned above, Jim has the first in a series of spring previews.

• Seahawks: The Hawks know who they will play in the preseason and where. Just not exactly when.

• Mariners: The home opener is tonight, with Taijuan Walker on the mound. The big question on everyone’s mind is whether this team will compete in the West. But there are other questions as well, including whether it can make baseball fun in the area again and what Robinson Cano did to get his bat so hot. ... Jerry Dipoto is in charge, isn’t he?

• Sounders: It was a dog day at Sounders’ training yesterday, which sounds like a bad thing but wasn’t. ... The team is trying to figure out how the young pups fit in. ... The inordinate number of red cards this season in the MLS is by design.

• Tried both yesterday. Tried resting. Tried a long, leisurely walk. Neither worked. But meds did. And by the evening the clicking and ringing in my ears was down to a manageable level. Today it’s even better. Maybe by Sunday, when Spieth dons the green jacket again, I’ll be 100 percent. Until later ...