A GRIP ON SPORTS • The NBA’s last night of the regular season was filled with drama. So was last night, something the league’s playoffs need. Read on. 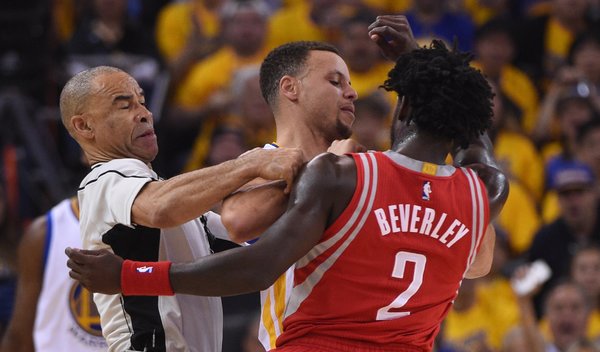 • When one team in a league wins basically 9 of every 10 games during a long regular season, then it’s a pretty safe bet said team is the favorite in the playoffs, right? Such is the case with the defending champion Warriors. They were – are – the prohibitive favorites in this year’s playoffs. They have the best team – winning a record 73 games during the regular season sort of ensures that designation – and they have the best player – Steph Curry made more than 400 3-pointers, eclipsing his own NBA record by more than 100. They are the favorites, especially considering the second-best team, San Antonio, has to navigate the playoffs with three players old enough to get the good parking in front of Rosauer’s. And the third-best team, the Cleveland Cavaliers, coached by LeBron James, has to rely on the troika of stars general manager LeBron James put together. Everyone else, including Indiana, Los Angeles and Toronto, are just hoping to advance far enough to keep their coaches from getting fired. So what do you do if you are Houston and you have to face Golden State in the first round? You turn Patrick Beverley loose. For those of you who don’t recognize the name, he is the Rockets point guard. And don’t worry about not being in the know. About the only way you may have heard about him is he’s the guy who dove in on OKC’s Russell Westbrook a couple years ago after a time out had been called. The ensuing contact resulted in Westbrook injuring his knee and missing the rest of the playoffs. In the first game of this series, Beverley and Curry had a physical exchange. Did that cause Curry’s injury? Nope, at least it doesn’t seem that way as Curry played quite a bit more afterward. But just when the star was hurt is hard to pinpoint. So you can’t pin it on Beverley. You can, however, pin an idiotic play on him last night. With Klay Thompson at the free-throw line, something happened, causing the play to be whistled dead. Thompson, who had a spectacular evening without his backcourt running mate, looked as if he might shoot the free throw anyway. So Beverly, for some odd reason, stepped into the lane and tried to knock the ball away. What the heck? Anyway, the exchange included J.B. Bickerstaff, the Rockets’ interim coach and former SuperSonics’ coach Bernie Bickerstaff’s son, picking up a technical. And the first two games of this series, though not all that competitive, may have changed the complexion of the playoffs. If Curry is out for any length of time – the Warriors are being closed-lipped about his status, of course – then the door is open for any number of other teams. Heck, if Curry is limited, and lower-body injuries do have a tendency to slow folks down, then the Warriors are not as good as they have been. At least that’s the Kool-Aid the other teams will try to concoct for themselves. And, in an odd sort of way, the playoffs will have an uptick in the drama department.

• WSU: It’s Spokane Week for the Cougars – the Spring Game will be Saturday at Joe Albi – but the biggest news yesterday out of the Palouse was leadoff hitter Trek Stemp was named the Pac-12 baseball player of the week. ... Former WSU star John Olerud was also named the conference’s player of the century, beating out any number of USC national title winners.

• Gonzaga: The Zags are competing in the WCC golf championships this week.

• EWU: The Eagles will also hold its Red-White Game this Saturday. On the sidelines will be a B-school legend and the Eagles’ defensive line coach, Eti Ena. Jim Allen has a feature on the new member of the staff.

• Preps: Jim was also out and about yesterday, covering a key GSL soccer match between Mead and Central Valley, won by the Panthers 2-1.

• Mariners: The M’s had a plan going into the season for their catching staff. So far, with Chris Iannetta hitting well at the big-league level and Mike Zunino doing the same at Triple-A, it seems to be working. • Seahawks: The Hawks began their offseason training yesterday and everyone expected to be at the voluntary workouts was there. ... Earl Thomas got married recently. He must really admire Felix Hernandez. ... Brandon Browner says he’s ready to prove himself again. But why are the Hawks bringing the old guys back? ... The Rams seem interested in former Eastern Washington star Vernon Adams.

• Sounders: The Sounders are winning more. But are they playing better?

• What a week. It’s so nice outside I have to do yard work. I low-key hate spring. Until later ...