A GRIP ON SPORTS • Anything happen Wednesday? Only about two of the biggest stories of the year, one regional, one local. Read on. • We’ll start in Seattle and work our way back here. If you’ve been a Mariners’ fan for any length of time, you know there is a convenient scapegoat for all their woes the past few years: Howard Lincoln. Though Lincoln isn’t the owner of the team in the same way as Paul Allen is the Seahawks, he’s the face of the franchise and ran the front office. He had the final decision on just about everything. And he’s the guy to blame. At least that’s the fans’ perception. The majority owner of the team, however, has been a corporation, Nintendo of America. Lincoln represented its interests. But that’s about to end. The team, and Root, the cable channel it owns, has been sold. More precisely, a majority interest in the team has been sold to the minority owners. The new face of the franchise and the guy nominally in charge? That would be former minority owner John Stanton (pictured), whose first day in the limelight included a comment that ticked off the NBA-loving folks in Seattle. That aside, the changeover seems to be a good thing. With one caveat. Nintendo had money. Lots of money. Maybe the company didn’t spend it all the time, but it did, through Lincoln, sign off on signing Felix Hernandez to a long-term contract and to giving Robinson Cano ownership of Mt. Rainier. The new majority group will be made up of 17 partners, all of whom have deep pockets. But will they be willing to dig into them to spend what’s needed to become a playoff contender? Stanton seemed to say yes yesterday, but most folks will say anything at their coronation press conference. “The No. 1 goal of this ownership team is to win the World Series,” Stanton said and if we take him at his word, then the future is bright. But what happens when that goal collides with Jerry Dipoto’s desire to raise the payroll $12 million at the trade deadline, to fill a hole for the stretch run? That’s when we will discover the true goal of 17 guys who have their own money invested in the team. Right now I’m inclined to believe Stanton. He and his partners have been working on this changeover for a while (Geoff Baker has a nice in-depth look at the sale’s timeline). They are involved because they have an abiding love of the game. Or because they see this as a good investment and they want to turn a profit. Either way, winning would feed their desire. So let’s celebrate the changeover and await a golden future. 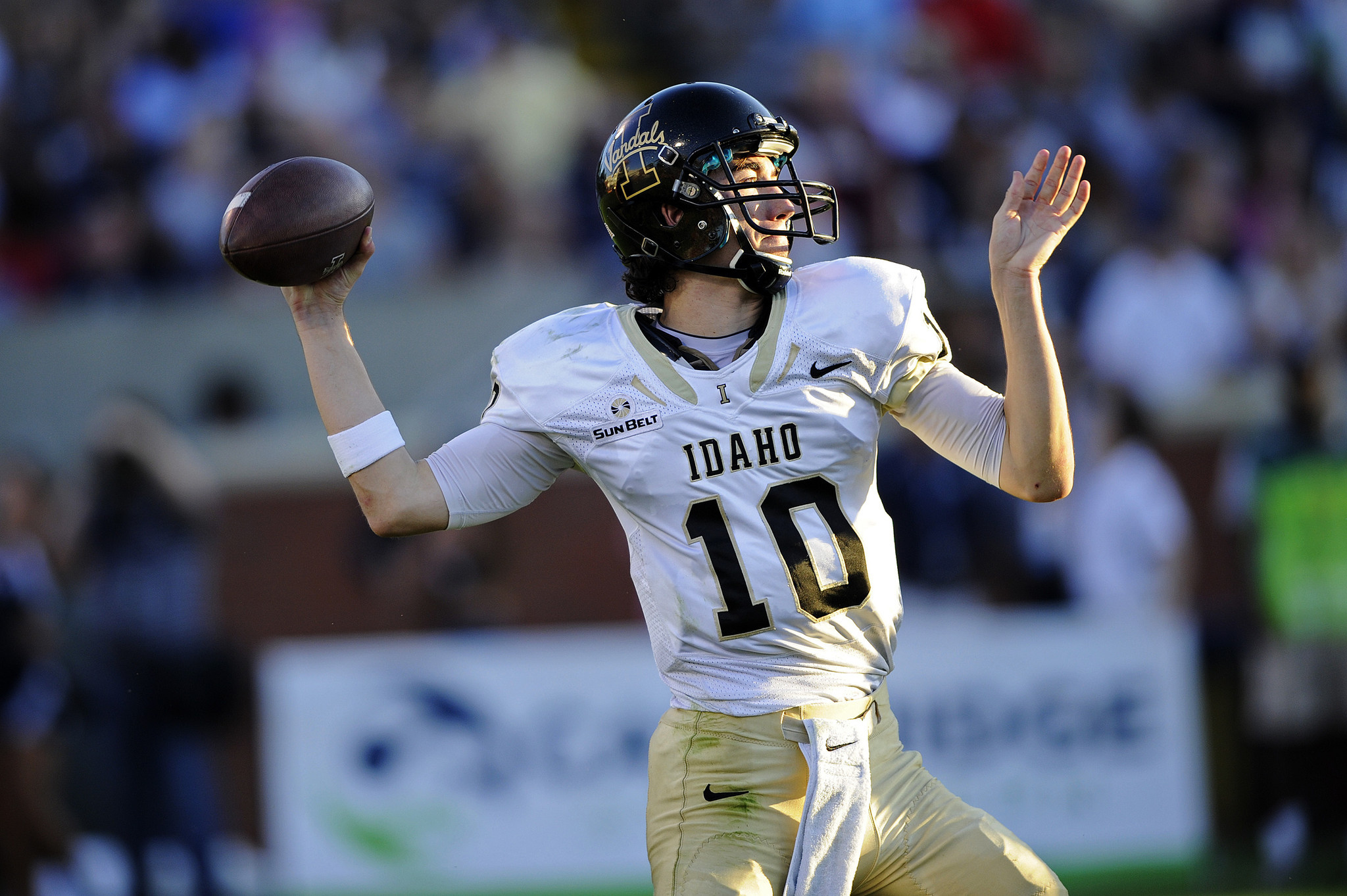 • Down the road in Moscow, there will be a press conference today. According to published reports, the Vandals are bowing to the inevitable and announcing their football team will do something no NCAA school has done: It will move down from the FBS ranks to its former home in the Big Sky Conference and the FCS. No school that has made the move up UI did has decided it wasn’t worth it and retreated. But good for Idaho. This is the right choice, not only for the school, its alums and fans. It’s best for the football players. Being in the Southern-based Sun Belt Conference has not been kind to the Vandal players. Every road game involved a longer-than-needed road trip. And many of the non-conference games were matchups with Power 5 schools willing to pay top dollar to beat up on a FBS school. Auburn, USC, Florida, Mississippi and Florida State – all on the road, of course – dotted the schedule the past three years. Each paid UI a bunch of money to buy an FBS-level win (though weather cost Florida its investment). Such games will still be available to a FCS Idaho team, of course, but most schools in the Big Sky play no more than two a year, with one being the norm. And it’s usually not a Florida State or an Auburn. And the conference road trips? They are to places like Portland and Cheney, not to Boone, N.C., or Troy, Ala. Maybe not as exotic, sure, but a lot less taxing. Besides, the Vandals were a fit in the Big Sky as they have never been since the Western Athletic Conference dropped football. The rest of their sports have played in the conference the past couple years and competed for titles. The football team will as well. The rivalry game with Eastern Washington should become a must-see quickly and games with Montana, Montana State, Idaho State and Portland will be in the same category soon. This isn’t a concession press conference today. It is an intelligent one.

• WSU: The NFL draft begins tonight on ESPN and though Joe Dahl probably won’t hear his name called in the first round, he should hear it sometime over the next couple days. The U-Hi graduate’s NFL dream is the subject of this Jacob Thorpe story. ... Jacob held a live chat here yesterday and you can read the transcript. ... Staying with football, ESPN.com’s Pac-12 blog sees Luke Falk as one of the conference’s top draft picks next year. ... WSU baseball coach Mary Lees is living the dream. ... Klay Thompson did his part last night in taking up the slack left by Steph Curry’s injury.

• Gonzaga: The Zags will play in a made-for-television extravaganza this December in Los Angeles, joining BYU, USC and Arizona for a Staples Center doubleheader.

• Chiefs: Seattle swept Kelowna out of the WHL playoffs.

• Preps: It’s Thursday, so Greg Lee has a few things for us, including this feature on U-Hi softball player Kirsten Anstrom (pictured) along with his track notebook and area leaders. Greg also has details on what’s happening with Sandpoint’s search for a new football coach. Alum and former Washington State player Jeremy Thielbahr accepted the position recently before changing his mind and staying at Seattle-area power Eastside Catholic.

• Mariners: The biggest news yesterday, of course, was the change of ownership. It was so big even John Blanchette has a column about the changeover. But there also was a game to be played and the M’s were going for a sweep of the Astros. Hisashi Iwakuma struggled and the M’s lost, 7-4 to drop out of first in the American League West. ... The M’s are scoring a lot of runs though their hitting statistics aren’t impressive.

• Seahawks: So who will the Hawks take with their first-round pick? Will they even have a first-round pick or will they trade it? The speculation centers round an offensive lineman though the guess here is John Schneider and Pete Carroll go outside the box if they keep the pick. ... Richard Sherman seems to always have fun.

• Sounders: What we have here is a failure to communicate. ... Jordan Morris is letting his scoring do the talking for him. ... Brad Evans' wallet is a bit lighter. ... Portland gave up a late goal and had to settle for a draw.

• What a Wednesday. And today could be more of the same. I’m interested in the Idaho decision and if other changes might be announced at the press conference today. We’ll have to wait and see. Until later ...