A GRIP ON SPORTS • The good and bad of college football – and Olympic soccer – were in the news yesterday. It seems as if we should touch on all of that. Read on.

• There was another fight in Pullman the other day. Wait, that’s pretty obvious. It’s a college town. Let’s rephrase. There was another fight in Pullman the other day involving a football player. Let’s be succinct and clear about this: Washington State’s players have to stop hitting people – off the field. No rush to judgment here or on the earlier fight – though, really, hasn't there been enough time to figure that one out? When college students drink alcohol and get involved in altercations, it’s hard to tell who is at fault from nearly 100 miles away. Even, as in the case of the earlier incident, when there is video. But darn it, stop. Stop fighting. Stop getting ticked off. Walk away. Learn to control your emotions. Be adults. Yes, college is about learning lessons. Just do it. Quit failing the final of Emotion 201, Interaction with Fellow Humans. Not just football players, mind you. Every student.

• Believe it or not – it is August 25 – the college football season begins tomorrow. Well, tomorrow here in the States. I do believe it will be Saturday in Sydney, Australia, where California and Hawaii kick off the season. Then, after those teams meet, the floodgates open. Think about this. If you are a college football fan, this Saturday will be your last free one until you have put the Christmas decorations away. Better get everything done you need finished before winter. 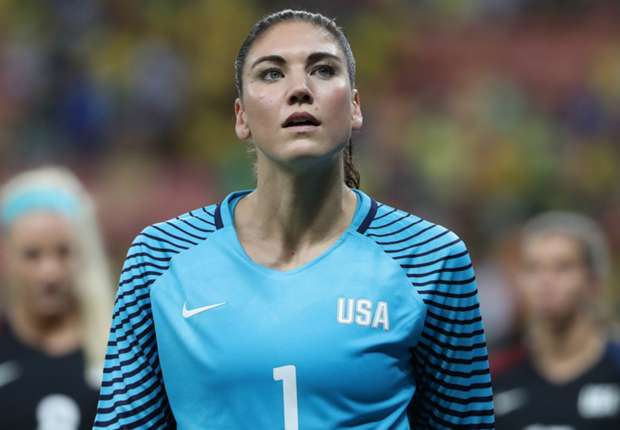 • Hypocrisy? Un-American activity? I’m trying to figure out which is worse. Or if either actually exist. The thoughts abound after U.S. Soccer fired Hope Solo yesterday. To recap, the stated reason was Solo’s comments about “cowards” and the like following the Olympic quarterfinal loss to Sweden. But it’s just an excuse. Solo’s actions off the pitch over the years have been, at times, reprehensible. A domestic violence accusation. A drunken incident with her husband, Jerramy Stevens, involving a team van at 1:30 in the morning. Inappropriate comments about coaches, broadcasters and others. Through it all, Solo was the best female goalkeeper the world has ever seen. But she wasn’t all that good in the just-finished Olympics. She’s 35. The career is winding down. Now, as a representative of the U.S., it’s over. Yes, she said something stupid. Surprised? The Richland High grad always spoke her mind. As a journalist, I celebrate the honesty. Punish those who speak their mind and everyone will only spout Nuke LaLoosh answers. Besides, punishing Solo now, when she can’t help the U.S. like she once did, seems hypocritical. Heck, it is hypocritical. Which, I guess, is typical of U.S. Soccer.

• WSU: Irony. It’s what happens when you are a sports writer, counting down position units and your secondary story is scheduled to run on the same day you have to report the leader of the group, safety Shalom Luani, is arrested for assault. Jacob Thorpe has both stories. ... Jacob also held a live chat yesterday. You can read the transcript. ... The Times' Stefanie Loh also has a story on Luani's arrest. ... Around the Pac-12 conference, there are coordinators, including Washington State’s Alex Grinch, who are on the cusp of moving up in the business. ... I’m sorry, but USC’s season goes like this, a lot of folks will be unhappy. The same with UCLA. There are some amazing expectations in Westwood. ... Moving into a new home usually makes people happy. So does playing with your brother, no matter how old you are. ... Colorado’s offense is progressing. ... Stanford has picked its quarterback. It is the least-experienced guy, Ryan Burns. ... Any team in the nation would like to have two 1,000-yard rushers. Or a guy who can play two or more positions well. ... If you want to be in the news in Arizona, play linebacker. ... The Bruins have had the same kicker seemingly since the Dark Ages.

• Gonzaga: One thing about the Zag women. They don’t shy away from tough non-conference basketball schedules. Jim Allen has the story of this season’s gantlet.

• EWU: The Eagles will scrimmage again tomorrow morning, but, as Jim tells us in this story, this one will be more for building depth. ... This story out of Weber State is both sad and heartwarming.

• Preps: Gonzaga Prep was voted No. 1 in the preseason Associated Press state 4A poll. Greg Lee has the story. ... Lawsuits are the obvious result of what happened at Bellevue High, right?

• Mariners: And that makes it two consecutive games without the offense. The M’s were shut out yesterday, losing 5-0 to the Yankees and lost a series for the first time in seemingly forever. ... Kyle Seager didn’t play due to a bruised foot and Nelson Cruz left early with back spasms. Great. ... The M’s may need some outside help if they are going to make the postseason.

• Seahawks: Guess what. The Hawks play the Dallas Cowboys tonight in Seattle. Preseason football. Enjoy (if that’s your cup of coffee). ... Thomas Rawls will not play tonight but Pete Carroll guarantees he will play in the opener in two weeks. ... Russell Wilson, at times, quietly lives his ideals. ... As we said, it's always fun to play a game with your brother.

• Sounders: If I had been writing the headline it would have read like this: “Sounders score twice, tie Houston 1-1.” Thank you MLS and your failure to utilize video replay. We’ve blasted the league over this before, but Houston scored an own goal that surprised everyone, including those supposed to oversee the game. The goalkeeper’s quick hands made it look as if he had kept the ball from crossing the line, but he didn’t. Replays showed that. So Seattle lost two points that could be crucial down the road. As it is, Nicolas Lodeiro scored in extra time to give the Sounders a 1-1 draw. ... San Jose and New England played without scoring. ... The L.A. Galaxy also played to a draw with Chicago.

• Full disclosure. As a college student, I did a lot – a lot – of crud I’m not proud of 40 years later. Makes it hard for me to throw stones at those who, you know, throw fists – as well as other things. But it would be a better world if everyone out there were a better person than I was at 20, so I’m going to keep hoping it will change. Until later ...