A GRIP ON SPORTS • Kind of an odd Saturday. Nothing big happening – if you don’t include that little game going on Sunday in the Bay Area. But there is a bit of this and that. Read on. 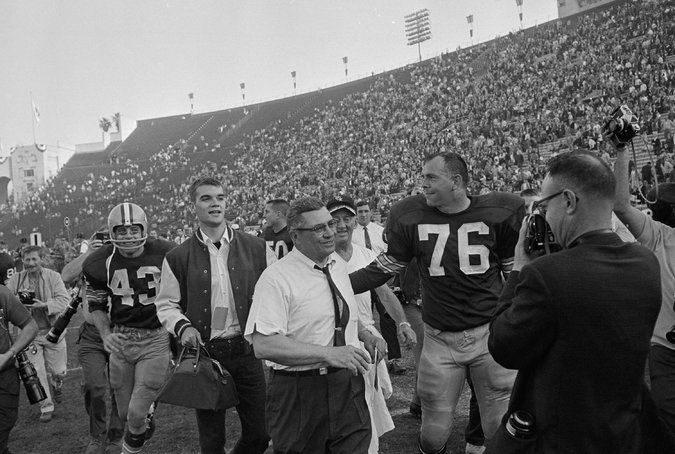 • Speaking of the Super Bowl, though we really don’t want to, it is the 50th “big” game. (You can’t really say it is the 50th “Super Bowl” because that name didn’t come into use until a bit down the road as the AFL and NFL champions met.) Because it is an anniversary year, there have been lots of stories looking back to Super Bowl pasts. Sort of like “A Christmas Carol,” NFL-style. Maybe Roger Goodell will see the ghost of Super Bowl 50 some day. You know, the one who points out that kids on a coach rarely bang their head enough to suffer CTE. Anyhow, I can remember the first “Super Bowl,” though what I do remember is Vince Lombardi making fun of the AFL champion Chiefs and how they would have been, his words, though I am paraphrasing, a middle-of-the-road NFL team. It didn’t take long for the AFL to catch up, though, thanks to the merger and to great quarterback play – a trend that has continued to this day.

• Rivalries are funny things. Sometimes they are caused by geography, sometimes by conference affiliation. And sometimes they come down to the coaches. Such was the case last night in Pullman. The Oregon women danced into town and blew out the host Cougars, 73-48. I can say with utmost sincerity the win meant a lot to Oregon coach Kelly Graves. See, he and WSU coach June Daugherty have had a personal rivalry that dates back to Graves’ days at Gonzaga, when the two programs vied for the attention of the Spokane women’s basketball community. And for Eastern Washington’s best players. The rivalry wasn’t a friendly one, and it boiled over a bit when WSU defeated Gonzaga in the Kennel in 2013, the final time Graves coached the Bulldogs against Washington State in Spokane. The Cougars won, 57-51 and there were some words spoken in the postgame handshake line (pictured). The next year GU won in Pullman and then Graves left for Oregon. The rivalry, if that’s what it is, moved south a bit. Last year the teams played three times, with WSU winning by one and two (at the Pac-12 tournament) and Oregon winning by one. Last night’s contest is the only league game scheduled this season, so we will have to wait until the postseason – unlikely – or next year for a renewal of the competition. • Marshawn Lynch hasn’t made his intentions for next year known yet, but it’s pretty obvious he’s positioning himself for his post-football career. He made another boffo appearance on the Conan O’Brien show Thursday night just hours before cutting the ribbon on a “Beast Mode” retail store in Oakland on Friday. The running back may only be 29 – about 64 in NFL terms – but he’s ready to transition into the entrepreneur role he envisions after football. Good for him.

• WSU: The Cougar links run the gamut from football to track and just about everywhere in-between. Jacob Thorpe kicks it off with this story on WSU's quarterback situation. ... Jacob also has a look at today’s basketball opponent, the news Josh Hawkinson is a finalist for a major award and a morning post with links. ... The Cougar Indoor is this weekend in Pullman. ... If you are like me, you might be a bit surprised Ryan Leaf’s prison time is over and he's out and about. He’s at the Super Bowl and speaking to the media (pictured). ... It’s Saturday, so there is always the mailbag on ESPN.com’s Pac-12 blog. ... Pat Haden will step down as USC’s athletic director. ... Oregon’s Thomas Tyner has decided to give up football.

• Chiefs: Spokane traveled to Kelowna and picked up a much-needed 6-3 win. ... It was much-needed because Everett defeated Kamloops at home, 4-3, and Tri-City won in a home shootout against Victoria, 5-4.

• Empire: The Indoor Football League team is about to begin playing and coach Adam Shackleford is impressed with its talent. Tom Clouse has the story.

• Indians: The Indians have a groundskeeper moving up to the big leagues. John Blanchette has a column on David Yearout’s big summer.

• Seahawks: Besides the Lynch news, there is more news on the Derrick Coleman, none of which is good news for anyone.

• Mariners: The M’s have signed a, well, “big” first baseman. And John McGrath sees that as big news.

• Sounders: Seattle and Portland meet today in a friendly. Ya, right.

• It is supposed to be semi-nice around here this weekend. Well, for February. All I know is the sun is shining now and that makes me smile. Until later ...