A GRIP ON SPORTS • Yesterday was dominated by a couple of guys who haven’t played baseball in the past five years or so. That’s fine. Looking back is OK once in a while. Read on.

• Ken Griffey Jr., was elected to baseball’s Hall of Fame. As expected. He set a record for the highest percentage of votes. As expected. He wasn’t unanimous, missing by just three votes out of 440. As expected. And there is a move afoot to try to discover who the lunatics were that didn’t vote for Junior. Again, as expected. Yesterday’s outrage that revolved around Griffey not being the first unanimous player elected to the Hall reminded me of the crowd scenes in “Young Frankenstein.” All we need is an Inspector Kemp with a wooden arm to lead everyone around. Pitchforks, torches and nooses optional. Or maybe not. How dare someone not vote for the greatest player of all time? Well, Griffey was good. Great even. But was he the greatest player of all time? Nope. Heck, when Ty Cobb retired he held more baseball records than any man alive and there was an argument that he wasn’t the greatest player of all time. Imaging Twitter back then. “Cobb btter thn Ruth? NO $@%$^ WAY! SMH! #Sultanofswat #Yankeesrule.” If someone who has covered baseball for years and years wants to assure that no player is elected unanimously because no one ever has, that’s their right. This is America, after all. Our country is built on the sanctity of the secret ballot – who I vote for is none of anyone’s damn business – and the Hall long ago granted voters anonymity. If someone wants to step up and admit they didn’t vote for Griffey, or Randy Johnson or Nolan Ryan or Tom Seaver – the top four vote-getters, by percentage, of all time – than that’s their right as well. Now, if someone didn’t vote for Griffey because they want Mariano Rivera or Derek Jeter to be the first unanimous selection, then let’s find out who they are and string them up. I’ll bring the rope. It would be just like those pompous New York people. And, yes, I'm being sarcastic. A little.

• Speaking of New York, I truly believe if Edgar Martinez had played in one of the boroughs, and posted the exact same statistics, he would be in the Hall already. But he didn’t. Mike Piazza (pictured) did. And, despite being a detriment to every team he played for as a catcher, was elected yesterday. Because his offensive numbers were good enough. Compare them to Edgar’s. There are differences, sure, especially in the power statistics. But as baseball has evolved, even old farts like myself have come to realize the most crucial offensive statistic is OPS, which is on-base percentage plus slugging. It combines the two most important elements of the game: getting on base and driving people on base around the bases. Piazza hit a lot more home runs than Edgar (427 to 309) but, despite that huge advantage, still trailed in OPS, .922 to .933. Yes, Piazza was catching, the toughest position to play, while Edgar was a designated hitter. But Piazza really shouldn’t have been behind the plate and, if he had been in the American League, he would have been a DH as well. No manager would have caught him if he didn’t have to, other than Piazza’s ego would have come into play and he may have thrown a fit. But, yes, as a catcher he had no peer as a hitter. He deserves to be in the Hall. So does Edgar.

• No college basketball in the area tonight. It’s an odd week. All of our local schools have matchups with their travel partners, so we don’t get them back on the hardwood until Saturday. The rest of their conferences, however, are in action. And once again last night the Pac-12 ate away at itself. California was playing as well as anyone on the West Coast. The Bears lost at Oregon last night. Oregon State seemed to be on an upswing. The Beavers dropped a game they should have won, losing at home to Stanford. Come March, when seeds are handed out to the NCAAs, the conference is going to rue its balance. But right now, it makes for exciting – if nerve-wracking – evenings.

• WSU: The Huskies come to town Saturday and Jacob Thorpe has his weekly preview. ... Last night’s action in Oregon came down to the wire, both in Eugene and in Corvallis. The losses may prove costly to California and Oregon State. Such is the way in the Pac-12. ... Will the upsets continue tonight in Los Angeles as UCLA hosts Arizona and USC does the same with ASU? ... Vernon Adams Jr. almost packed it in and headed north before the summer was out. Instead, he was Oregon’s most valuable player. ... Athletic director Scott Woodward is leaving UW to take over at Texas A&M. ... Both California and Stanford will be looking for quarterbacks next season.

• Gonzaga: The Bulldogs open a three-game homestand by welcoming Portland in Saturday. Jim Meehan has more in his preview. ... There is a kerfuffle in the Salt Lake area. Utah has pulled out of its rivalry game with BYU next season after this year’s game included a punch by a Cougar player. Talk about indignation in the Basin. It’s the Gonzaga/WSU disagreement on steroids. ... The Cougars have a legacy who is shining. He may have to tonight with Santa Clara coming to Provo. 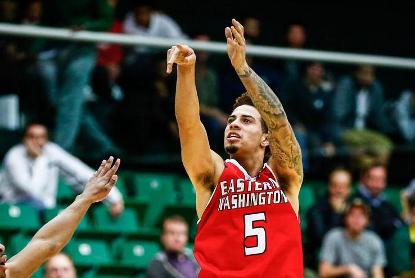 • EWU: Where would the Eagles be without graduate transfer Austin McBroom? Jim Allen examines the lift the point guard has brought the nation-trotting Eagles. (And yes, we understand the irony of the school that lost Adams relying on a graduate transfer quarterbacking its hoop team.) ... Jim also has his weekly preview. ... Another week, another player of the year award for Cooper Kupp. Jim has the story. This one is a biggie and solidifies the junior as the FCS’ best player.

• Idaho: No one is ahead of Idaho in the Big Sky basketball standings. Sean Kramer has the preview headed into Saturday’s game in Cheney. ... Sean also has a blog post on a football player leaving.

• Empire: The Arena Football League (better known as “the league that is falling apart”) has taken over operations in Portland after a disagreement with the ownership. OK then.

• Preps: Thursday mornings bring us Prep Page pieces, including Greg Lee’s column – this week he looks back on 2015 – and a feature and a notebook. ... There was wrestling last night and we have a roundup. • Seahawks: If all the things we are reading about Marshawn Lynch are true, then we know he will play this weekend, he will be a force and there has never, ever been more of a team player than the veteran running back. ... Pete Carroll allows players to set the agenda, have fun and be themselves. It’s not your typical NFL coaching style. ... New players seem to get up to speed quickly with the Hawks. ... Tyler Lockett did not practice Wednesday in preparation for Sunday’s game at Minnesota.

• Mariners: Really, there is nothing else other than the Hall of Fame news. Our John Blanchette weighs in on the up-and-down perceptions of Griffey over the years.

• I can’t remember who tweeted it out yesterday, but someone said, tongue-in-cheek I’m certain, that we needed to hunt down the three people who didn’t vote for Griffey. How do I know it was tongue-in-cheek? They included this picture of the nice folks from Springfield in an angry mob chasing down the Simpsons. No one seriously wants to be included in that crowd. Until later ...