A GRIP ON SPORTS • There’s a curse associated with growing older, one your parents may not have told you about when you were young. It has to do with your childhood sports heroes and what happens to them. Read on. 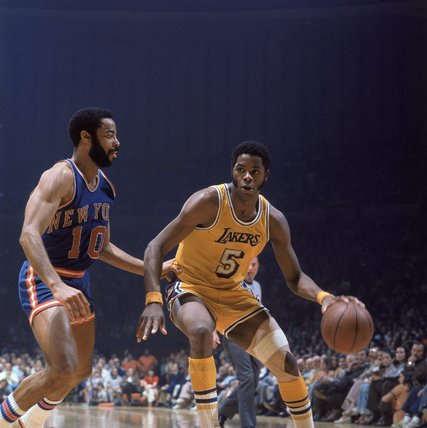 • The Los Angeles Lakers were my NBA team growing up. All through the 1960s, they were good. But they didn’t win the NBA title. Usually it was the Boston Cetlics standing in their way. Later it became the New York Knicks. But it was always someone. Until my sophomore year of high school. When the Lakers did a couple things no one had ever done before. Those Lakers weren’t Showtime. They weren’t flashy. But they were solid. Finally. And all it took was inserting a solid player into the lineup for the magic to happen. Look, Jerry West was my favorite player, but I loved Jim McMillian. Who? OK, I understand that question.. McMillian wasn’t one of the Lakers’ stars when I was in high school, but he was one of the main reasons they were the best team in NBA history. In my eyes. He was the unsung guy, the small forward with the big game. He guarded. He boarded. He scored when needed. He did all the little things the 1971-72 Lakers had to have when they won a still-record 33 consecutive games. And he did it all while carrying the burden of replacing one of the NBA’s all-time best players, Elgin Baylor. McMillian was a bench guy that season when Baylor decided to retire, the victim of failing knees and a failing game. Some thought the Lakers were doomed. But sometimes losing a superstar is exactly what a professional team needs. Remember the 2000 Seattle Mariners? They had A-Rod at the height of his powers. A .316 average. Forty-one home runs, 132 RBI. They won 91 games and finished second in the American League West. Rodriguez left in the off-season for Texas and the Mariners were doomed. Oh yeah, they won a baseball record-tying 116 games the next season. Doomed my elbow. The same thing happened with the Lakers, albeit in different circumstances. Baylor’s retirement opened a door for McMillian and he blasted through. For a fourth wheel on a team that included West, Gail Goodrich and Wilt Chamberlain, he was pretty good offensively, averaging a quiet 19 points a game – if such a thing was possible. The night he stepped into the starting lineup coincided with the beginning of the Lakers’ winning streak. It was not a coincidence. That’s why I loved Jim McMillian. He helped my team, the team I used to pretend I was a part of during my backyard shooting sessions, win and win and win. They won 69 times, then a record. They won an NBA title, the only one in my youth. They won. That was important. And even my limited brain could see while West, Goodrich and Chamberlain were the stars, McMillian – along with Happy Hairston, the underrated power forward – was the reason why. And now he’s gone. Dead at age 68. Another key element of my youth no longer retrievable. So tonight I’m taking my basketball into my backyard. I’m going to play my imaginary game – the Lakers vs. the Knicks – one last time. And Jim McMillian is going to make the game-winning basket to keep Los Angeles’ winning streak alive. Guaranteed.

• WSU: Cougar center Riley Sorenson was named to the Rimington Award watch list yesterday. Jacob Thorpe has all the information in this blog post.

• Gonzaga: The golf season is winding down with a Zag and a Vandal having success.

• Whitworth: The Pirates are happy to host the first round of the NCAA Division III baseball tournament this week at Avista Stadium. The games begin today and Tom Clouse has an advance.

• Empire: The Empire was encouraged to discover how close they are to IFL’s gold standard, the five-time defending champion Sioux Falls Storm. That’s the main thrust of Jim Meehan’s weekly notebook.

• Preps: There was good news on the 4A soccer side, with Central Valley scoring late and getting past Davis of Yakima, 2-1, but there was not-so-good news on the 3A side, where Mt. Spokane lost 1-0 to Interlake. Jim Allen was at the latter match and has this story. ... Greg Lee has all the information needed for the state softball playoffs in Idaho and Washington. ... We also have a roundup of postseason action yesterday in the area.

• Mariners: Speaking of guaranteed wins, the M’s hit the road last night and hit the baseball – hard. Robinson Cano, Nelson Cruz and Kyle Seager keyed a 10-0 win over the Baltimore Orioles. The win, coupled with Texas’ loss vs. Oakland, put the M’s atop the A.L. West again. ... Joaquin Benoit is healthy again.

• Seahawks: Funny thing. The two largest Puget Sound papers have two different views today of Russell Wilson’s commencement speech. ... Michael Bennett is clear on two things: He wants more money and he will be at training camp. Huh? That's not usually how it works.

• OK, so the 1971-72 Lakers have been passed in regular season wins. The Bulls and the Warriors have won more games in a single season. But no one has won more consecutive contests. Until someone does, I’m still hanging my youthful hat on that mark and calling them the best. And, yes, I know it doesn’t make sense. Nostalgia rarely does. Until later ...

Posted May 18, 2016, 7:59 a.m.
By Vince Grippi
vincegrippi55@yahoo.com
Vince Grippi is a freelance local sports blogger for spokesman.com. He also contributes to the SportsLink Blog.