• Nothing big is happening today, at least nothing in our neck of the woods, so we’ll run around like a chicken without a head and cover a lot of the barnyard ...

• You don’t think losing Ketel Marte hurts? The young shortstop is not only lost from the lineup with a thumb injury, he also is no longer player in the field. And his stopgap replacement, Chris Taylor, played a big role in the M’s 5-0 loss last night. How big? How about striking out with the bases loaded in the second, when the M’s had a chance to take an early lead. And then, in the eighth, airmailing first base with not one but two throws. The two errors led to four unearned runs as the A’s broke a losing streak at Seattle’s expense. No wonder the M’s decided to “rush” Marte to the big leagues. 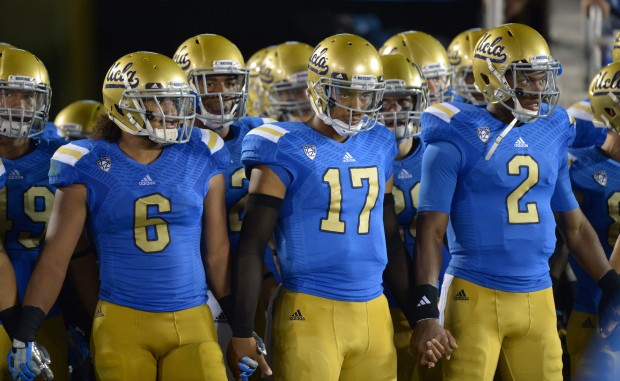 • We’ve read a lot about the money gap between the Pac-12 and the top-two Power 5 conferences, the SEC and Big Ten. Now there is another money gap developing in the conference itself. Most revenues in the Pac-12 are shared but there is one area still left to each school: apparel deals. UCLA will announce the largest one around today, as the Bruins will leave Adidas and team up with Under Armour in a 15-year, $280-million deal. That’s a lot of shoes. But the Maryland-based company wants a foot in the Los Angeles market and it is paying tremendously to get it. It’s a deal WSU – and everyone not in L.A. or named Oregon – will be unable to ever match.

• The Bellevue football scandal is slowly winding through the prep bureaucracy, with the school district sending its recommendations to the KingCo Conference yesterday. The league will decide if the recommended punishments are enough. No matter what’s decided, there will be litigation involved. That seems inevitable.

• The NBA playoffs may hinge on whether or not the league felt a kick to the groin was intentional or not? My, what a time we live in.

• WSU: The Cougars have upgraded their non-conference basketball schedule a bit, announcing yesterday a (sort-of) home-and-home series with Kansas State. Sort of? The KSU home game is in Kansas City, the Cougars’ in Spokane. Jacob Thorpe has all the details in this blog post. By the way, the new Washington State president came to Pullman from, wait for it, Kansas State.

• Gonzaga: The Zags finished the baseball regular season with a loss at UC Santa Barbara. Now they gear up for the WCC championships in Stockton, where they will open against BYU.

• EWU: As we passed along yesterday, former Eagle quarterback Vernon Adams has signed a three-year contract with Montreal. Jim Allen has more in this story.

• CCS: The NWAC track and field championships are underway, with CCS in second behind perennial power Lane following the first day.

• Preps: The rain over the weekend forced much of the state softball playoffs to finish Monday. Josh Horton has the 4A regional story and we can pass along a roundup of other action.

• Mariners: As we said, the M’s lost, 5-0 to the A's. Taijuan Walker dominated – except for one pitch. Then Taylor and the bullpen allowed Oakland to blow the game open late. ... Leonys Martin’s hot hitting has helped him ascend to the leadoff spot.

• Seahawks: Michael Bennett says there is nothing magical about his improved play. He’s just eating better.

• Maybe some day soon we’ll be able to write a column about how the M’s turned around their struggles at home. Maybe. Until later ...

Posted May 24, 2016, 8:06 a.m.
By Vince Grippi
vincegrippi55@yahoo.com
Vince Grippi is a freelance local sports blogger for spokesman.com. He also contributes to the SportsLink Blog.