A GRIP ON SPORTS • The baseball playoffs begin today. And, as has been the case every year since 2001, the Seattle Mariners are not part of them. How should we react to this “tradition?” Read on.

• With apologies to CBS and Mr. Jim Nance, this is the tradition unlike any other. No one in Major League Baseball has a streak that compares. It’s been so long since the M’s have been in the postseason, there are kids driving today who can’t remember a league championship series in Seattle. Heck, even a wild-card game.

But they aren’t. And that’s because ... ? My answer is simple: It’s because Jerry Dipoto and management went in another direction. And signaled that direction back on July 20, some 11 days ahead of the trade deadline.

That’s when Dipoto sent left-handed pitcher Mike Montgomery to the Chicago Cubs for first baseman/designated hitter Dan Vogelbach. Let me amend that a bit. Sent Montgomery, who had become the M’s best left-handed relief pitcher (a 2.32 ERA in 32 appearances), for a minor leaguer. 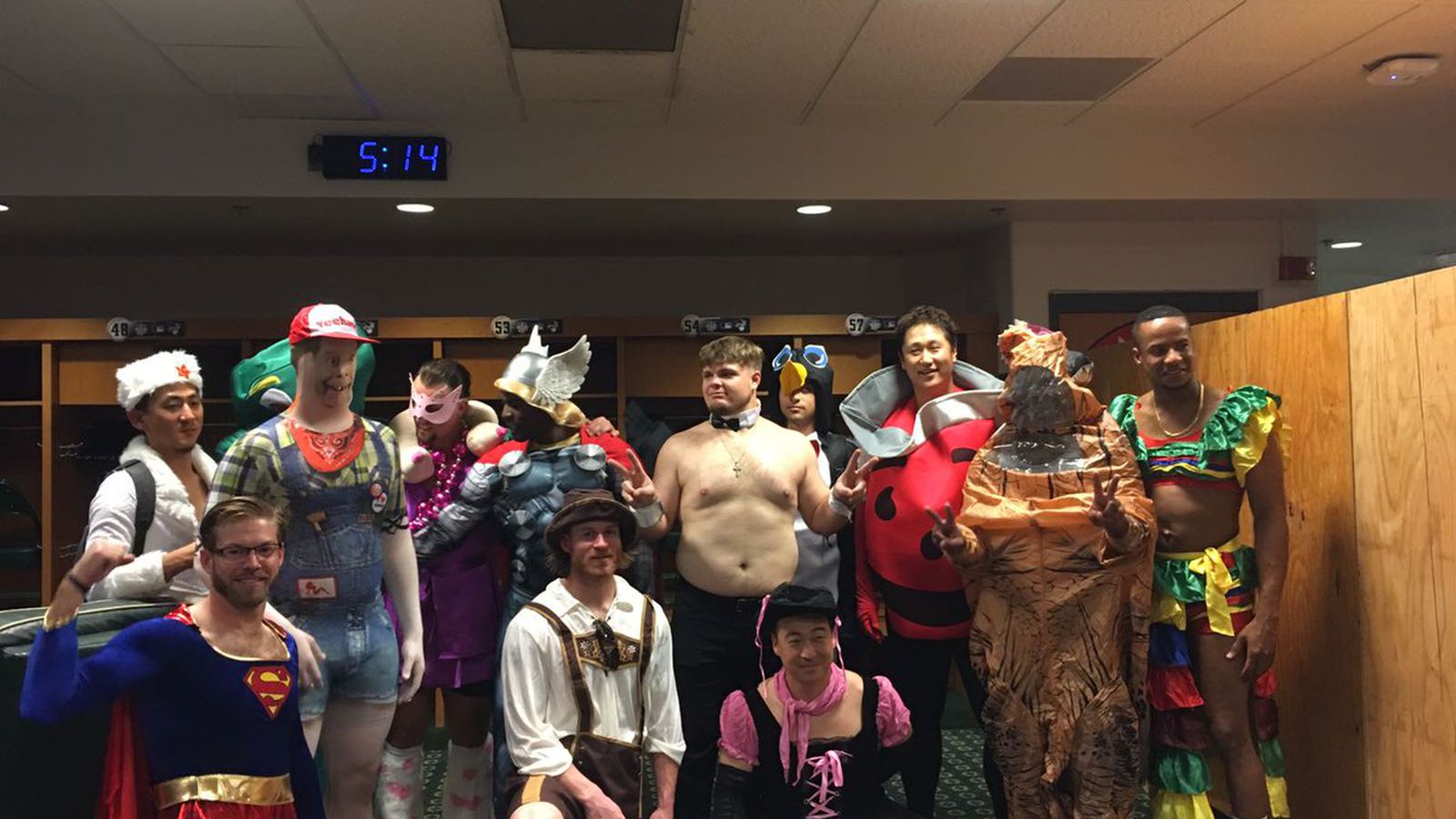 Oh sure, Vogelbach (pictured with the rest of the M's rookies as the Chippendale guy) was with the M’s some. He had 12 at-bats in September. Got one hit. Struck out six times. A non-factor this season. Now, that’s not to say, down the road, Vogelbach might become the next great Seattle power hitting first baseman or – more than likely – designated hitter, but this year he was about as important to the M’s success as Tino Martinez, who retired years ago.

Which is my point. Montgomery will be helping the Cubs try to make the World Series. He was a little less effective in Chicago than he was in Seattle – his ERA “jumped” to 2.82 – but there is little doubt a left-handed reliever with a mid-90s fastball couldn’t have helped Scott Servais’ team down the stretch. One less inning of Steve Cishek anyone? We're not saying Montgomery's trade was the reason the M's didn't make the playoffs. It's more of a canary-in-the-coal-mine type of thing. An indicator of the thought process of the front office.

Vogelbach is an example of subtraction by addition, or in simpler terms, building for the future. Dipoto saw a chance to get a kid he felt could help the M’s for years and took it. OK, that’s admirable. If you’ve been in the playoffs year after year. But when it’s been a decade and a half without a trip to the promised land, then the correct response is "what the heck?"

Did Dipoto, who cut loose Mark Trumbo and J.A. Happ before the season, make other moves that helped? Sure he did. Sending Wade Miley to the Orioles for Ariel Miranda turned out to be brilliant, especially when you consider the trade had the look of another wait-till-next-year transaction. Miranda was one the M’s best starters down the stretch.

But the M’s also picked up a handful of guys who weren’t a lot of help. For example, there is Arquimedes Caminero, a hard-throwing right-hander the Pirates gave up on.

Caminero had some good outings. He seemed like an answer. Then, with the M’s desperate for a power arm in the bullpen, he lost command. But he was still being trotted out. And quite possible cost the Mariners a game or two.

Because, you know, there wasn’t a good option. There was. But he was in Chicago. Meanwhile, the veteran core of the Mariners, Robinson Cano, Felix Hernandez, Nelson Cruz and Hisashi Iwakuma, all get another year older. And another year closer to their skills diminishing.

Hey, all of the moves in July, August and September may bear fruit. They may end up being the basis of a decade-long-playoff run. But we will have to wait for next year to find out. Because this year the playoffs include five American League teams not named the Mariners. Again.

• WSU: It was a busy day in Pullman yesterday and Jacob Thorpe covered everything that happened. On the story side, he has this piece on Mike Leach taking a hands-on approach with the offensive line, the news the Apple Cup is sold out, the start time for the UCLA game – it’s late – and the first look at Stanford. ... From yesterday’s media availability, Jacob passes along video of John Thompson, Isaac Dotson, Andre Dillard and Leach. ... Stefanie Loh has a story in the Times on the Stanford preparation. The Cardinal didn’t fare too well against the Huskies, who the Cougars hope to emulate. ...  A WSU volleyball player, Taylor Mims (pictured), is the Pac-12 Conference’s player of the week. ... Klay Thompson is a different looking player to start this season.

Elsewhere in the Pac-12, Jon Wilner goes a bit deeper into California’s debt problem, one that dwarfs that of other nearby Pac-12 schools. ... The Bears graded out pretty well against Utah. Now they get a reeling Oregon State team. ... The big matchup up north, other than WSU vs. Stanford, is Washington trying to break a Mariner-like losing streak to Oregon. Washington coach Chris Petersen has put a muzzle on his players while the Ducks’ coaches aren’t afraid to speak out. ... Colorado is atop the South standings. USC thinks that’s where it belongs. ... Arizona is so beat up it doesn’t know who will play quarterback against Utah, which is also down a player or two ... UCLA travels to the desert to face an Arizona State team that hopes to have its quarterback back.

• EWU: Winning leads to accolades and that was the case with the Eagles this week. Cooper Kupp and Antoine Custer Jr. each were given awards from the Big Sky. Jim Allen has the story. ... Around the Big Sky, Montana State is evaluating its quarterbacks. ... Southern Utah has to put the Montana loss in the rearview mirror. ... North Dakota continues to win and move up in the polls.

• Mariners: The News Tribune’s Bob Dutton has his thoughts on the M’s season – and the future. • Seahawks: So much for being completely healthy after defeating the Jets. Linebacker Mike Morgan will be out for at least eight weeks after being put on injured reserve. ... The bye week helps health, but will it stifle momentum? ... Despite that, Pete Carroll believes this could be his best team in Seattle. Interesting. ... Doug Baldwin is not only talking, he's getting involved.

• Sounders: It isn’t easy getting from point A to point B in the MLS.

• We’ll be back here tomorrow. We are sure of it. Which is a lot quicker than the NCAA's trials will end. The organization won a bit yesterday and hopes to avoid a loss in another lawsuit. Until later ...