A GRIP ON SPORTS • You a numbers’ person? Like coincidences? How about the ramblings of an old man? We give them all to you on this second Saturday in October. Read on. • Yes, we are going to get to football. There are enough football links below to drown you. But that’s for the links. This column today is about baseball. As it always is, and always will be, on Oct. 8.

See, today is the 60th anniversary of the only perfect game in World Series history, Don Larsen’s 2-0 victory over the Dodgers in Yankee Stadium in 1956. How do I know? How do I always know?

It’s also my 60th birthday. The big 6-0. Five years – or is it seven? – to a social security check. But the number isn’t important (truth check: yes it is). What is important is the baseball oddity. Being born on a yet-to-equaled day in baseball always has played an outsized role in this guy’s life.

Baseball wasn’t just ordained from the outset, it was in my blood. My dad spent my first 20 years blaming me for missing the game and the next 20 telling me how cool it was I was born on that day. Of course, he didn’t use the word “cool.” He was a Depression baby, not a Baby Boomer. He used another term. It probably had a profanity attached to it.

Over the past 60 years (at least those of them I can remember), Larsen’s perfect game and my birthday came up every time I was chatting with a baseball fan this time of year. Heck, 10 years ago my wife tried to make a connection with Larsen as a gift for me. It didn’t work. No matter. They are a lot of connections. How about this one? I tried to get in touch this week with Jeff Lahti, the pitching coach at Clackamas College in Oregon. Why? I wanted to talk to only major leaguer I could ever find who shared my birthday. The former St. Louis reliever was born in the Portland area the same day I was born in Pasadena, Calif. He attended Portland State, graduating the same year I got out of UC Irvine.

While I went a different, less-lucrative direction, he made his way up the baseball ranks, pitching for the Cardinals, finally becoming their closer in 1985. I wanted to talk with him to find out if the oddity of being born on Oct. 8, 1956 affected his life as it did mine. Alas, I couldn’t make connections.

But I did make another one.

See, Lahti’s career came to a screeching halt in April of 1986 due to an arm injury. Nothing odd about that. Happens all the time. But what is odd is his replacement in that role with the Cardinals was none other than Todd Worrell, a guy who I used to catch.

OK, I thought that was strange. The only guy in the bigs who shares my date of birth being replaced by a guy who I used to catch and went through battles – literally –  with? What are the odds?

Baseball, and its connections through our lives, is weird. And never ending. I realize that every Oct. 8.

• So who wins tonight at Stanford? I’m tempted to follow Jacob Thorpe’s pick and say the Cougars, as they played so well last week in the rout of Oregon. But Stanford isn’t Oregon. And the road isn’t Martin Stadium.

This one will be tougher. Harder fought. (Stanford has to be ticked off after being dismantled by Washington last Friday.) And yet I do believe WSU will find a way to win. The deciding factor for me is Stanford’s secondary injuries – and Washington State’s ability to run the ball in the red zone.

The Cougars would have won last year against Stanford if they could have cashed in a red zone opportunity or two. This year the Cardinal’s soft pass defense, which kept WSU in front and out of the endzone much of last year’s game, ultimately will fail because the Cougars won’t have to settle for field goals. They should be able to punch it in a couple times. Let’s call it 24-21 WSU, with Erik Powell’s first successful field goal of the season supplying the margin of victory.

• WSU: Yes, the game is still about a half-day away, but Jacob has you covered. He has an advance, focusing on the Cougars’ new emphasis on toughness, and a 2-minute drill. ... Stanford sees this matchup as a bounce-back opportunity. The Cardinal also knows they have to stop WSU’s balanced attack. ... The 10th-ranked Cougar volleyball team made quick work of Oregon State. 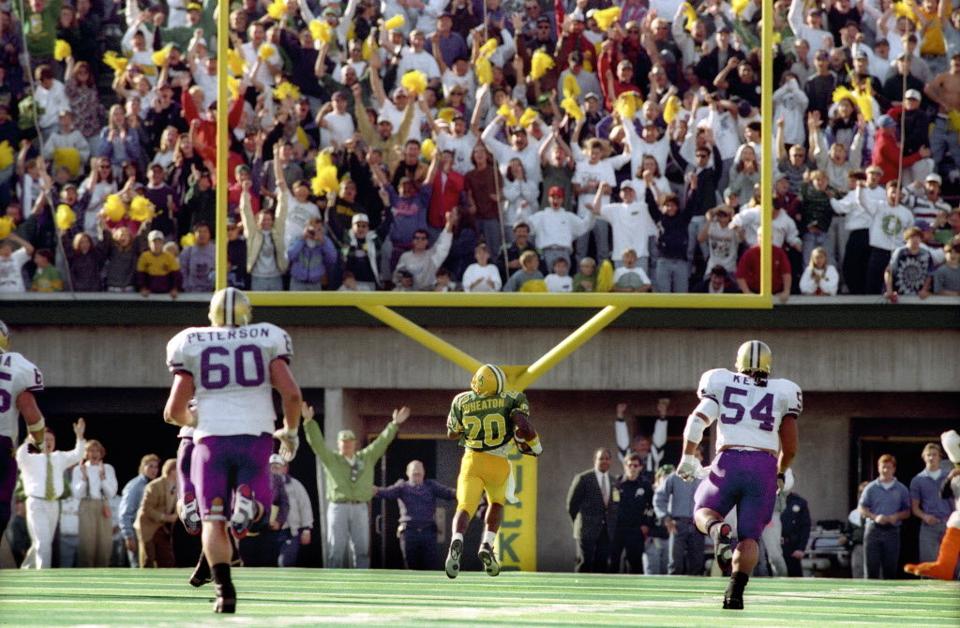 Elsewhere in the Pac-12 conference, the matchups include a couple of streaking teams. Or is it streaks? Whatever. The Huskies are streaking and hope to crush a long losing streak to Oregon. The Ducks just hope to have a quarterback play well. ... Utah hasn’t defeated Arizona since Rich Rodriguez became the Wildcats’ coach. Of course, UA hasn’t had to play a 17-year-old, fourth-string true freshman quarterback in the series either. ... California is threatening to be the break-out team of the year and playing at Oregon State shouldn’t slow down the Bears. ... Colorado is currently the holder of the break-out label but the Buffs have to travel to the Coliseum to face USC. No matter how bad the Trojans have played this season, they will still be a tough out. ... UCLA usually is the team that knocks out quarterbacks, at times outside the rules. Now the Bruins are the beneficiaries of Arizona State’s starting quarterback being out. ... It's Saturday, so we pass along the mailbag from Ted Miller at ESPN.com's Pac-12 blog.

• Gonzaga: The Zags’ depth took a hit this week, though the loss of freshman center Jacob Larsen may not be felt this season. The 6-foot-11 Denmark native was expected to redshirt anyway as he adjusted to college hoops. Jim Meehan has more in this story.

• EWU: Northern Colorado is more of a test this season and Eastern Washington is looking to pass today. Jim Allen has an advance of the game in Cheney. ... Around the Big Sky in football, both Weber State and Southern Utah host conference games today, with the Thunderbirds getting UC Davis and the Wildcats facing Portland State. ... Sacramento State hosts conference-leading North Dakota. ... Montana has a non-conference matchup with Mississippi Valley State. ... Montana State hopes to get back on track against beat-up Northern Arizona.

• Idaho: The Vandals are in Louisiana to face Louisiana-Monroe. Josh Wright has this preview.

• Whitworth: The Pirates will host Puget Sound at the Pine Bowl. Tom Clouse has this preview.

• Chiefs: Spokane got back on the ice last night in the Arena, gave Lethbridge too many power-play opportunities and lost 5-3. Steve Christilaw has the story. ... Everett stayed atop the standings with a 4-1 home win over Tri-City.

• Preps: It was your typical Friday night of high school football, with a barnburner in Lewiston that went the Bengals’ way, 55-51 over Coeur d’Alene and a couple of close, hard-fought battles elsewhere. Greg Lee was at one of them, a 35-21 Post Falls’ win over Lake City. ... Central Valley rallied past Ferris in the featured GSL game. Jim Allen has that story and Colin Mulvany has a photo report. ... We also have a roundup of the rest of the Greater Spokane League action and another roundup of other games in the area.

• Seahawks: The best Hawk story this weekend is this one on linebacker Kevin Pierre-Louis. ... The Jets’ game netted some folks big fines.

• Mariners: The M’s have spent some capital on improving the depth in their farm system. It seems to be working.

• Sounders: Brad Evans received a red card last week for basically swinging his head around too fast and flinging sweat on an opponent. Seemed pretty obvious the penalty was incorrectly applied. But to get it overturned, the MLS basically makes it impossible. So the Sounders didn’t appeal. ... Nicholas Lodero will be back this week. ... Ozzie Alonso made changes last offseason and they worked.

• I’m spending the day just sort of lying around. Then tonight I’ll take in the WSU game and work, taking post-game phone calls as part of my radio gig. You can listen locally on KXLY 920 and, if you are out of the area, on the WSU Gameday app. It’s pretty easy. Remember, if the Cougars lose, it is my birthday, so be nice to me. Of course, by the time Derek Deis and I take to the air, it will probably be tomorrow. Until later ...