A GRIP ON SPORTS • Football seasons, and football games, are filled with ups and downs. So how goes the rollercoaster ride Washington State and Eastern Washington are on right now after Saturday? Read on.

• A thrill-a-minute, right? If you don’t feel as if you are getting your money’s worth with the Inland Northwest’s football programs these days, then you must have much higher standards than I. There is nothing if not excitement into the wee hours of the morning.

Heck, even if you are an Idaho – a last-second Austin Rehkow field goal leads to a win at Louisiana-Monroe – or a Whitworth – about a million passing yards in a a win over Puget Sound – fan, you have to be thinking the rollercoaster is worth an E ticket these days.

But it’s the Eagles and Cougars, who met on the Martin Stadium turf to open the season, supplying most of the hair-raising fun. So let’s look at yesterday’s rides.

• Eastern has a weird propensity to start slowly, as if the car can’t get up the big hill at the beginning of the ride. The chain need oiling or something? But once the Eagles finally crest that first hill, watch out.

But Eastern picked up speed right out of the lockerroom – again – and rolled over the Bears 49-31. By the time the cars got ready to drop off the riders, Eastern had amassed 659 yards of total offense, with quarterback Gage Gubrud accounting for 521 of them – 435 passing and 86 rushing.

• Down in Northern California, the Cougars took on 15th-ranked Stanford. WSU had lost eight consecutive times to the Cardinal, dating back to when Jim Harbaugh was wearing K-mart khakis on the sideline. But the past hasn’t meant much to this year’s team.

Like the season, Saturday night’s game couldn’t have started much worse. Luke Falk’s second pass was hard to explain. It went directly to a Stanford linebacker. There seemed to be a chance the rollercoaster car would jump the tracks. Instead, it gave the defense a chance to show what was in store.

The Cardinal didn’t score. The Stanford offense actually didn’t put the ball into the endzone until the final play of the game – and I’m still not sure the Cardinal receiver finished the process of that catch. By then, however, everyone wanted to get out of Bay Area, including the officials.

It was 42-16, WSU and if it weren’t for a little rivalry game in Eugene, the Cougars would have exorcised the biggest demons of the day in the Pac-12.

As it was the ride wasn’t a smooth one. It was more like an old-fashioned wooden rollercoaster than one of those sleek modern things.

The bumps included another Falk interception, this one returned for a Cardinal score, and another missed field goal. (If you are keeping track, the Cougars are the only FBS team without a successful field goal this season.)

But otherwise, the offensive and defensive lines once again dominated, the receivers – most notably River Cracraft – had their way with the depleted Stanford secondary, and Christian McCaffrey’s Heisman hopes were buried somewhere near the Stanford lockerroom after halftime.

It’s Oct. 9. There are two undefeated teams left in Pac-12 Conference play. They both reside in Washington. The rest of the 2016 football season could be one heck of a ride.

• WSU: The 42-16 game certainly had its ups and downs, and Jacob Thorpe chronicles them all. He has the game story, which mentions the “T” word, and adds a notebook, big plays and players and key moments. There is also the scoring. ... Stefanie Loh has a game story and a notebook in the Times. ... Stanford’s biggest concern, besides back-to-back losses, is McCaffrey’s health. He had one decent length run, but finished with just 35 rushing yards. The Cougars also snapped his 18-game streak of more than 100 all-purpose yards. Luckily for the Cardinal, they travel to Notre Dame next week and that game should be easier than Saturday night’s. 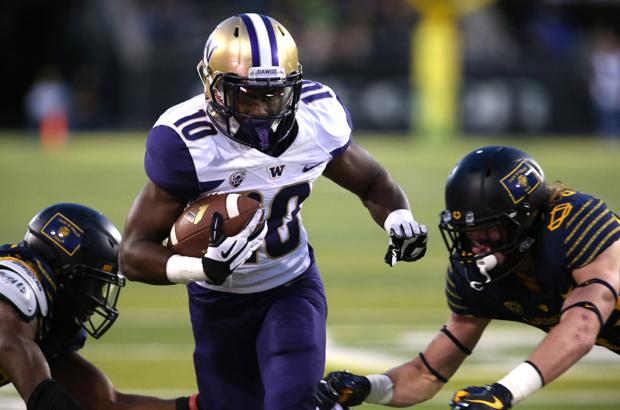 Elsewhere in the Pac-12 on Saturday, the streak is dead. Buried deeper than an oil well. The Huskies pounded Oregon 70-21 in Eugene yesterday, ending a dozen years of frustration and greasing the skids on Mark Helfrich’s run-him-out-of-town express. ... Colorado showed it’s not ready for prime time with a daytime loss at USC. The 21-17 loss not only cost the Buffs its South lead, but also its national ranking. ... UCLA couldn’t protect Josh Rosen and couldn’t stop Zane Rodriguez from setting an NCAA field goal record as Arizona State won 23-20 in Tempe. ... Utah picked up its first win over Arizona since Rich Rodriguez arrived in Tucson, running the Wildcats ragged in the second half and winning 36-23. ... Host Oregon State blew a lead yesterday against California, but these Beavers didn’t blow the game, winning 47-44 in overtime.

• Gonzaga: The Zags showed off their new roster to the faithful in the Kennel yesterday but it was the biggest holdover, Przemek Karnowski, who was the center of attention. The big guy, coming off multiple injuries, showed he’s about ready to go. Jim Meehan has a story on the Kraziness and John Blanchette adds a column that not only looks ahead but looks back as well.

• EWU: The Eagles sit atop the Big Sky Conference after their win, though, for the sake of their fans’ blood pressure, a fast start once in a while might be appreciated. Jim Allen’s game story never gets off to a slow start and neither does his notebook. Tyler Tjomsland also has a photo report. ... Around the Big Sky, Weber State found a way to get past Portland State and inject itself into the conference race. ... Southern Utah handled UC Davis easily. ... The Aggies’ California neighbor, Sacramento State, lost handily to visiting North Dakota. ... Northern Arizona got back on track with a road win at Montana State. ... Montana stepped out of conference and blitzed Mississippi Valley State.

• Idaho: The Vandals led most of the game but found themselves tied as the clock wound down. Rehkow stepped up, nailed a 27-yard field goal and gave them a 34-31 win. It was his fourth field goal of the game.

• Whitworth: The scoreboard was lit at the Pine Bowl on Saturday, with the Pirates finally rolling over Puget Sound 56-32. Tom Clouse has the game story.

• Chiefs: Tom did double duty Saturday, also covering the Chiefs’ 4-1 loss to Victoria in the Arena. The defeat dropped Spokane deeper into the U.S. Division cellar.

• Preps: Make it two consecutive titles for West Valley-Yakima at the Linda Sheridan Volleyball Classic. Greg Lee has the story of the Inland Northwest’s largest tournament.

• Seahawks: The Hawks are off today, enjoying their lone bye. They have shown an ability this season to overcome any obstacle.

• Mariners: Speaking of obstacles, what are the M’s and Scott Servais facing in the offseason as they try to build a true playoff contender?

• Sounders: Jordan Morris is heading back early from national play to help the Sounders try to make the MLS playoffs under interim coach Brian Schmetzer.

• Sorry this is a little late this morning. The late WSU start means bedtime comes about 2 a.m. – it will be even later next week – and getting going in the morning takes a bit more time. I feel sort of like the beat-up rollercoaster train at the rundown park you used to visit as a kid. The hills may not be too high, but getting over them still seems darn near impossible. Until later ...