A GRIP ON SPORTS • Did you watch the NFL kick off its season last night? Part of the thundering herd? Ya, us too. Read on. • The NFL grabs us and holds us during the late summer, fall and early winter, doesn’t it? Doesn’t matter who is playing, it gets under our skin, attaches itself to our heart and makes it beat faster and faster until it seems as if it will explode. Our team wins – whatever that team may be, the local squad, a childhood franchise or your fantasy group – and the next workweek seems better. There is a lilt in your step. I know my friend Kent, a Bronco fan from back in the day when Mile High meant something different in Denver, is having a great day at work today. But a loss. Wow. Nothing but misery from Monday until, I don’t know, about Thursday morning. That’s when you realize it’s set to start all over again. And the memories. Around here, the Super Bowl win is probably the gold standard, though there are old-timers who still rave about Steve Largent’s catch against the Raiders in the playoffs back in the day. Me, I have a favorite NFL memory as well. It dates back to September of 1984. The opening Monday Night Football game of the season. Labor Day. And Kim went into labor with our first child. Appropriate, no? I remember thinking, hold on honey, let me see if Eric Dickerson is going to break one more run before we go. She was having none of it, even though, those days, she was probably a bigger football fan than I was. It was time. Of course, being a first child, he didn’t make an appearance until about 24 hours later, but would Kim listen? Nope. We missed the Cowboys comeback – OK, that’s a good thing – just so we could drive down Monroe to the hospital. Some sports fan she was. Anyhow, more than 30 years later, both the Rams and my family have moved – the Rams more than once – and yet I never see the Rams play without thinking of that game. And how I missed the end. That’s what NFL games do to you. Suck you in. Get you hooked. Thank goodness it’s back.

• WSU: The Cougars will be back on the turf Saturday night in Boise. Blue turf. As Jacob Thorpe writes, this is a series that’s been one-sided thus far. ... Jacob also has video interviews from Joe Salave’a and Dave Nichol on the blog. ... The Pac-12 released the conference basketball schedules with TV assignments yesterday and WSU will open on ESPNU. Jacob has a story on that. ... Some of the Boise State assistants have a close connection to last week’s upset at Martin Stadium. ... Elsewhere in the conference, who wins? And how did Oregon State make its passing game work in Minnesota? ... Will Washington’s John Ross see the football on kickoffs anymore? ... Arizona State is usually special on special teams. ... Colorado wants to play even faster against Idaho State. Shouldn’t be a problem. ... Arizona’s Anu Solomon was injured at practice Wednesday and may not be ready by Saturday. ... Speaking of injuries, USC suffered a season-ending one against Alabama though Stanford found its player is better than thought. ... UNLV will throw a running quarterback at UCLA. ... San Diego State is good. California knows it has to play tough. ... There are some relationships among the coaching staffs in this week’s games between Utah and BYU and Oregon and Virginia.

• EWU: Zach Bruce mans the back line for the Eagle defense. And, as Jim Allen writes, he does it well. ... Jim held a live chat yesterday and the transcript is right here. ... Portland State will try to make it two consecutive years with a win at an FBS school. ... UC Davis will have faced two former Big Sky quarterbacks after the first two games. ... Tyler Bruggman is still Montana State’s quarterback. ... Northern Iowa has a transfer at quarterback as well.

• Idaho: Jayshawn Jordan mans the back line for the Vandal defense. And, as Josh Wright writes, he does it well. It seems to be the day to write about safeties.

• Chiefs: Owner Bobby Brett made his decision. Scott Carter will be the next general manager of the Chiefs. Tom Clouse has the story. And it’s really good. ... The WHL preseason rolls on with a series of games in the Tri-Cities.

• Indians: Spokane began the North Division series with its lone home game. It was a generous host, giving Everett five unearned runs that led to an 8-5 AquaSox win. Josh Horton has the game story and Colin Mulvany the photo gallery. The series now moves to the West Side, with today’s game at Safeco. ... Eugene stayed alive against Hillsboro with a 6-2 win.

• Preps: There were two football games at Joe Albi Stadium last night, with Coeur d’Alene routing Mead in one and Cheney rallying to get past North Central in the other. Greg Lee covered both games.

• Mariners: The M’s say they are not done, that they still think they can make the postseason. They took another step that way last night with a 6-3 win over the Rangers and now face Oakland and the Angels, two teams with problems. ... One problem, the bullpen, will get help soon. 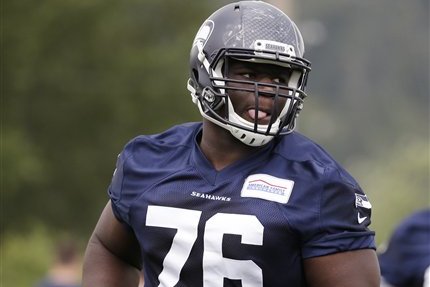 • Seahawks: There was a player following in Colin Kaepernick’s footsteps last night. And the Hawks’ Jeremy Lane did his own thing last week. It seems Sunday, 9/11 actually, the Seahawks will do something as a team. ... The offensive line will look different than expected this week with Germain Ifedi’s injury. ... The Hawks are young. Really young. ... Speaking of old, Marshawn Lynch may be contemplating another run. ... Is Russell Wilson contemplating more passes?

• Sounders: Seattle may have an X-factor already as the playoff push continues. ... Landon Donovan is coming out of retirement.

• No NFL or key college games today. It’s Friday night and high school football is in the spotlight. But tomorrow, that’s a big deal. For me anyway. I have been “volunteered” for a fund-raising walk downtown. Ever get “volunteered” like that by someone in your family? I’m not sure what time I have to be ready to go, but expect the post up before then. If I wait until after, I may not be healthy enough to write it. Ironically, the walk has something to do with cardiac care. At least there should be a lot of people there who are fluent in CPR. Until later ...