In Eager, environmental journalist Ben Goldfarb reveals that our modern idea of what a healthy landscape looks like and how it functions is wrong, distorted by the fur trade that once trapped out millions of beavers from North America’s lakes and rivers. The consequences of losing beavers were profound: streams eroded, wetlands dried up, and species from salmon to swans lost vital habitat. Today, a growing coalition of “Beaver Believers”―including scientists, ranchers, and passionate citizens―recognizes that ecosystems with beavers are far healthier, for humans and non-humans alike, than those without them.

Ben Goldfarb's "Eager:The Surprising, Secret Life of Beavers and Why They Matter"

"Eager:The Surprising, Secret Life of Beavers and Why They Matter" 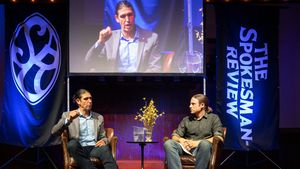 "A marvelously humor-laced page-turner about the science of semi-aquatic rodents…. A masterpiece of a treatise on the natural world.”―The Washington Post