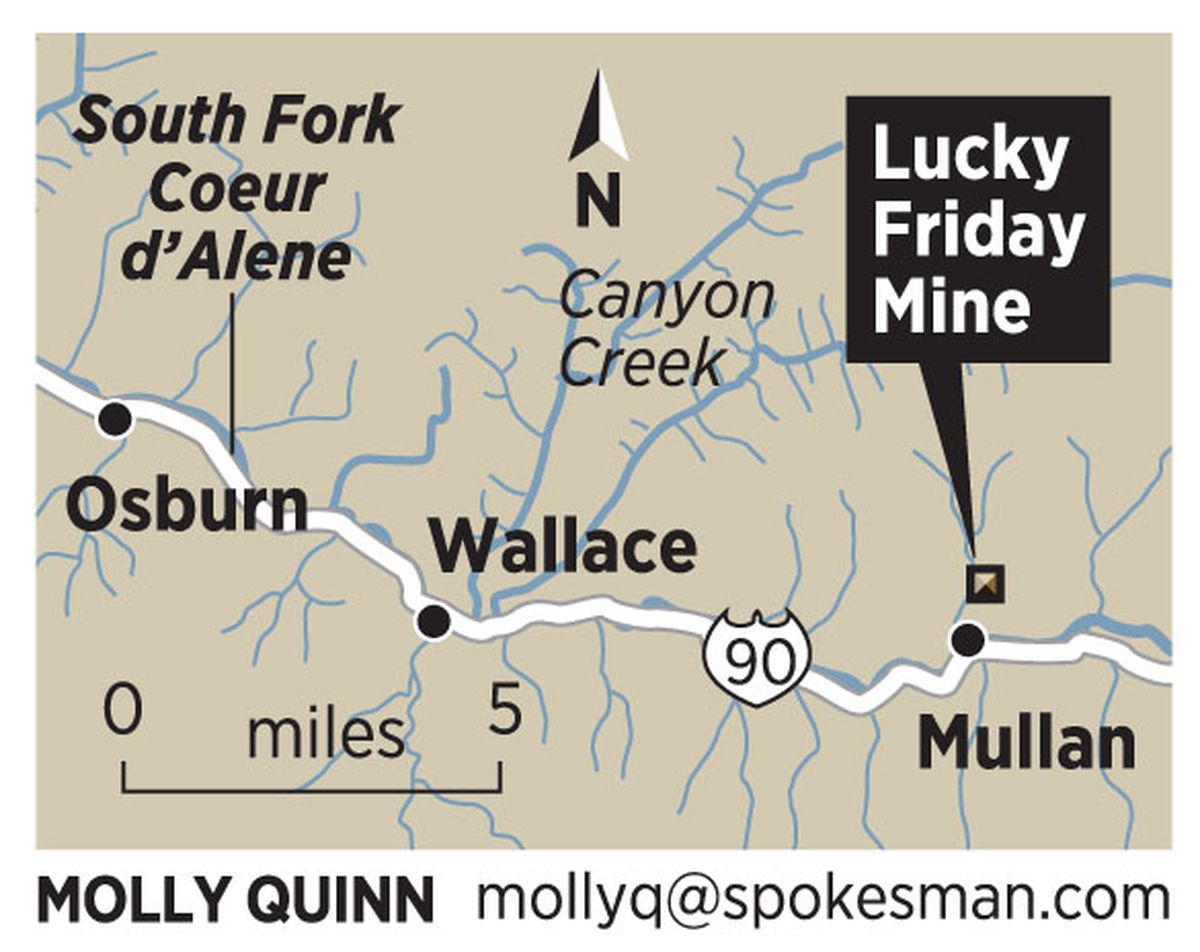 MULLAN, Idaho – Hecla Mining crews were still digging Saturday evening for a miner trapped more than a mile underground at the Lucky Friday Mine.

Company officials Saturday continued to call their efforts a rescue operation nearly 24 hours after the roof of a tunnel where the Idaho miner was extracting silver-bearing ore collapsed.

“We’re doing everything we can to reach the employee,” said Phillips Baker, Hecla’s chief executive officer. “We’re going to bring him out. That’s what we’re working on.”

The missing miner was identified Saturday by community members as Larry “Pete” Marek. Marek and his brother, who are mining partners, were in a 150-by-150-foot work area called a “stope” when the cave-in occurred at 5:30 p.m. Friday. Marek’s brother, whose name was not released Saturday night, was unhurt. Marek, from a longtime Silver Valley mining family, remained trapped on the other side of the debris.

Baker said the company has not been able to contact the trapped miner.

Solemn miners and community members huddled in groups in downtown Mullan to share information about the accident and rescue efforts. Others formed prayer circles.

The mine was closed Saturday for rescue operations. Three Lucky Friday rescue crews have been working around the clock.

The roof collapse occurred as the two miners on swing shift were spraying their work area with water to cool the rock and control dust.

The section of roof that collapsed was 20 feet wide, 10 feet deep and about 75 feet long.

Rescuers had cleared debris from the first 25 feet by Saturday afternoon, but progress slowed for safety reasons. Crews had to secure the overhead rock before they could continue forward.

Baker estimated that there was at least another 50 feet of rock that needed to be cleared to reach the miner. Hecla chartered a plane from the East Coast to bring equipment that would allow the company to remotely control the digging equipment. That equipment landed in Coeur d’Alene on Saturday evening.

Company officials are in close contact with the trapped man’s family, Baker said, and will be providing support and counseling as needed to family members and mine employees.

Despite the danger, many Silver Valley families have long-standing ties to the mining industry.

“My family’s lived here and (mined) since the late 1880s,” said Brad Sala, 29, who works at the Lucky Friday Mine with his dad.

“I like the work and the money is good,” said Sala, who brought his young son to a Saturday news conference to get an update on the trapped miner.

Sala works in stope No. 12, close to the work area where the miner was trapped. But he wasn’t working when the cave-in occurred.

Officials from the federal Mine Safety and Health Administration were also on the scene.

Located in the Bitterroot Mountains, the Lucky Friday is one of North America’s deepest hard-rock mines. And it’s getting much deeper. Hecla Mining is sinking a new shaft to depths of nearly 9,000 feet. The $200 million expansion of the mine will allow the company to go after richer veins of silver deposits.

Silver is currently trading at around $40 per ounce – its highest price in years.

The headframe of the 59-year-old mine is visible from Interstate 90 near Lookout Pass.

The mine employs about 275 workers and 100 contractors.

About 170 of the miners are unionized with the United Steelworkers of America.

Miner Jerry Hagaman, who serves on the mine’s safety committee, said the accident is a shock to employees.

“Hecla runs an extremely safe mine,” he said. “But right now our thoughts are with the family.”

The company has not yet started its accident investigation, Baker said, and won’t until the miner is found.

“The company has not yet determined why or how this occurred,” he said.

There was a small earthquake in northwest Montana on Friday evening, however Hecla community affairs representative Mike Dexter said it was not strong enough to register on the mine’s seismographs.