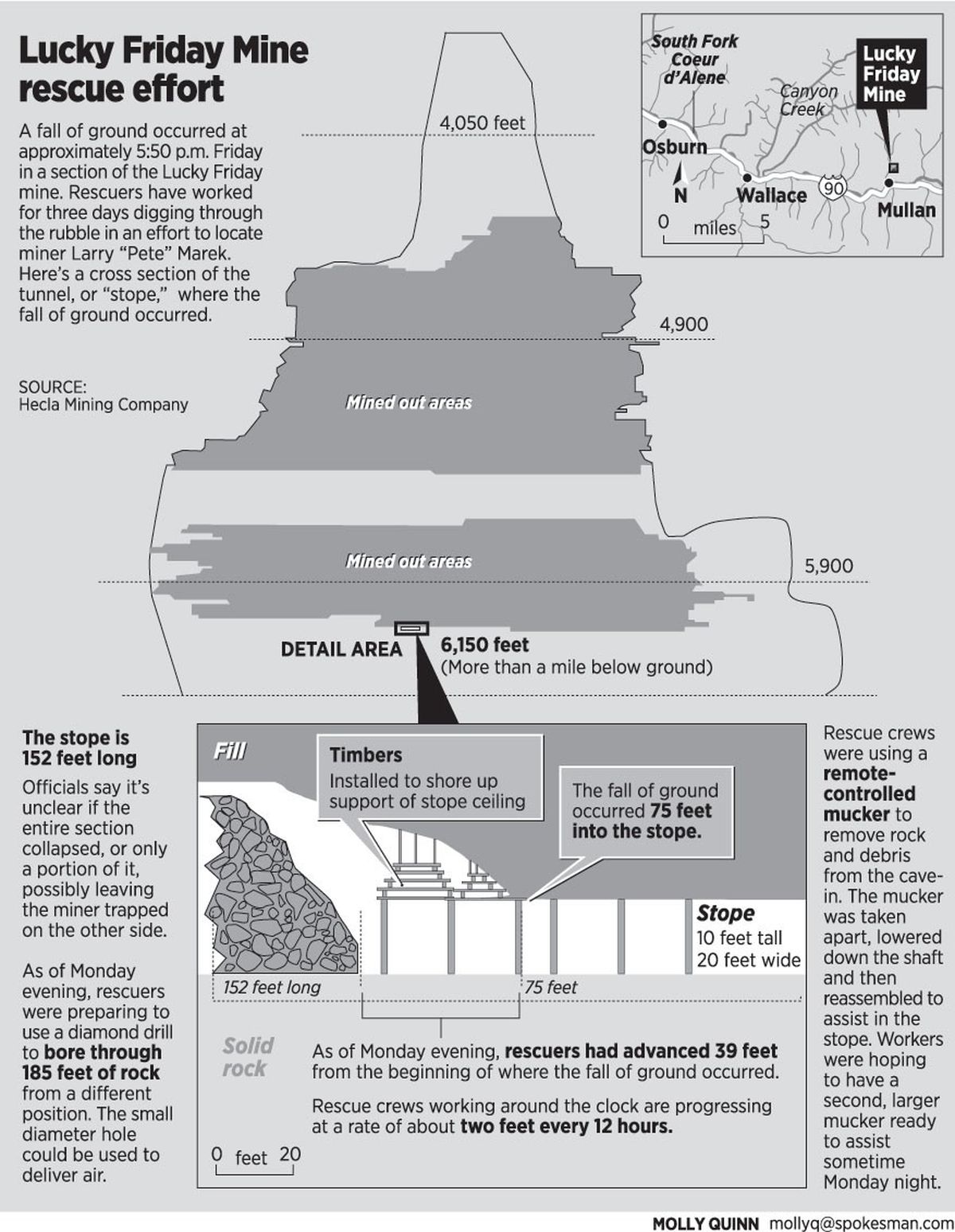 Rescue crews continue to dig toward trapped miner, Larry Marek, at the Lucky Friday Mine in Mullan, Idaho. View a photo story
Rescue workers completed two bore holes into the rubble of Lucky Friday Mine on today in their effort to rescue a miner trapped since Friday. A camera fed through a 180-foot hole showed there is a void in the area, although the size or extent of the void could not be determined Tuesday night, company officials said in a news release. A second hole, 46 feet long, was tunneled into the area, and has allowed crews to pump fresh air into the void. Officials are hoping that Friday evening’s rock fall left a space where Larry “Pete” Marek has been able to take refuge. It’s unknown whether Marek, 53, survived the roof collapse in his work area at the Mullan, Idaho, silver mine. Last year, bore holes were used to establish contact with 33 miners trapped in a copper mine in northern Chile. Food, water and messages were passed through the holes until the miners could be rescued. At the Lucky Friday, the bore hole tunnels through 180 feet of rock from a neighboring stope, or work area. After the first hole was completed, Hecla Mining officials began drilling the second bore hole to the area where Marek is trapped more than a mile underground. Tuesday’s progress on the bore hole was an encouraging development in the round-the-clock efforts to locate Marek. Earlier in the day, federal mine safety officials halted efforts to clear fallen rock from the stope’s west end. Unstable overhead rock posed too much danger for rescue workers, who might have been within 35 feet of reaching Marek. Instead, rescue teams have begun excavating a 220-foot drift north of the work area. Hecla said a second excavation effort will begin as soon as possible from another part of the Lucky Friday, requiring 182 feet of digging. “We always have to have a Plan A and a Plan B,” said Kevin Hirsch, assistant district manager of the Mine Safety and Health Administration’s western district. Both of the new excavation efforts use conventional mining methods, including jumbo drills and blasting. Crews are installing overhead support to protect rescue workers from falling rock. “The company is working extraordinarily hard to reach Larry and will continue making every effort as long as it takes, using safe methods in the process in order to avoid risk to the rescue teams,” Hecla officials said in a news release. The Lucky Friday’s safety record is touted by both mine administrators and hourly workers. More than 11 years have passed since a fatality at the mine. Yet mining is a high-risk industry, said Virginia Gillerman, associate research geologist for the Idaho Geological Survey. “When you’re that far underground, there is just a lot of inherent risk and danger in spite of the best engineering. You can’t overcome those,” Gillerman said. “Rocks have a intrinsic nature to fall down. …We’re asking a lot from Mother Nature to be down 6,000 feet taking out the kinds of minerals that we use for our daily lives.” Inspection reports on file with the Mine Safety and Health Administration show no recent violations related to the type of accident that occurred Friday. However, separately filed accident reports show that the Lucky Friday has reported 12 roof falls, or cave-ins, of various sizes and severity since January 2008. In three of those accidents, workers reported injuries. The most recent occurred about six weeks ago. No one was hurt in the March 4 accident, though there were workers in the area when the rock fell. A summary of the accident given by a miner and posted on MSHA’s database reads: “We were on an intersection trying to relieve some bags in the (supporting) wire and re-bolt when a 10’ long x 8 ’wide x 6’ high section of the back (roof) came down.” Just a day earlier MSHA had completed its quarterly safety inspection, which generated eight relatively minor violations including four issued to Hecla and four to contractor Cementation USA Inc. Hecla was fined $873. A penalty has not yet been assessed against Cementation. Last November, there was a rock burst at the mine during day shift blasting time. No one was hurt when a 6-foot-by-14-foot-by-8-foot section of roof fell and blocked a roadway. Rock bursts caused two more roof collapses in September, with no injuries reported. An investigation into the causes of Friday’s rock fall won’t begin until Marek has been found. “At this time, MSHA and the company’s clear focus is rescuing the miner,” Hirsch said.