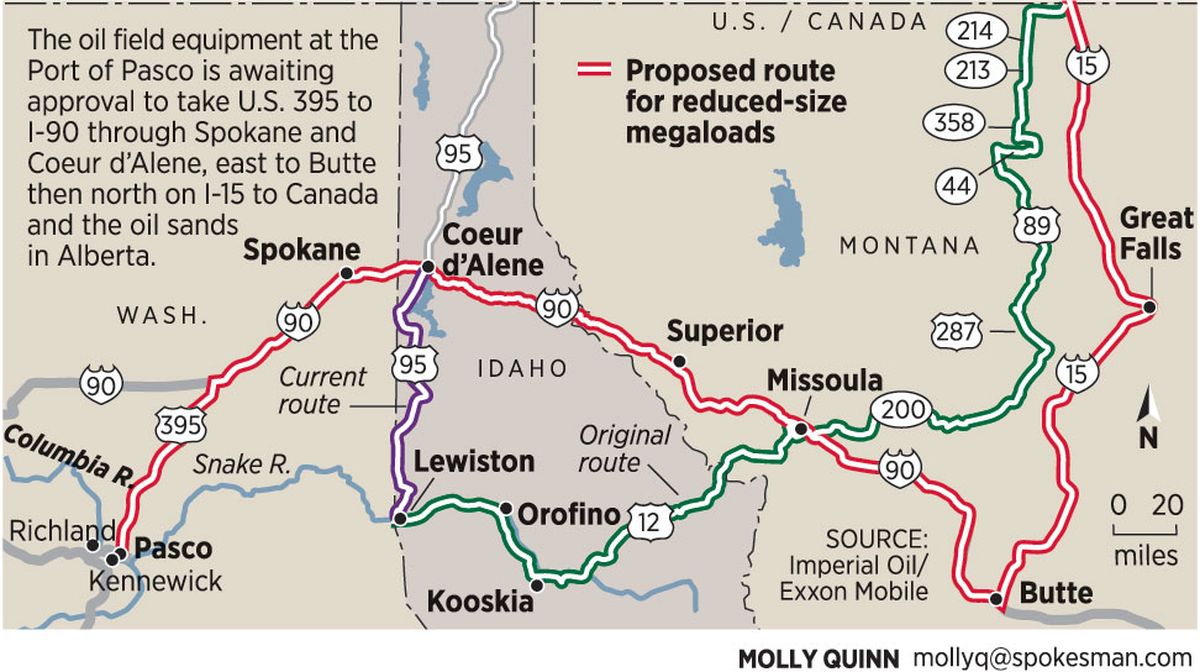 Click to view a full-size map of the proposed megaload route.

ExxonMobil’s initial plan to move 200-plus megaloads along a twisting, scenic byway in Idaho and Montana has become mired in permitting delays and legal challenges.

The 98 proposed loads taking the Spokane route would be reduced in size, as the company already has done to allow some of its giant loads now stalled at the Port of Lewiston to travel north. Those loads, which were halved in height to fit under freeway overpasses, have traveled on U.S. Highway 95 to Coeur d’Alene, then along I-90 to Montana and up Interstate 15 to Canada.

Fifty giant modules of oil equipment already have arrived at the Port of Pasco by barge, where they’re awaiting approval to be shipped by truck up U.S. Highway 395 to I-90 through Spokane, east to Coeur d’Alene, and then follow the same route as the Highway 95 loads along I-90 and I-15 in Montana to Canada.

“There would be no road closures or road construction,” said Cynthia Bergman White, spokeswoman for ExxonMobil.

ExxonMobil “has submitted detailed transportation plans to regulatory authorities in the states of Washington, Idaho and Montana that minimize public inconvenience, assure safe transport and comply with all transportation and environmental regulations,” the company said in a news release Monday. “Movements will be supported by appropriate traffic control and maintenance/support crews.”

Washington State Department of Transportation spokesman Bill Legg said, “We move a lot of superloads through the state – these are not unusual at all. We move over 7,000 superloads a year in Washington.”

Though the freeway through Spokane is wider, much of the route has two eastbound lanes; loads that are wide enough to take up both of those likely would travel only at night, Legg said. The transportation department received the application six weeks ago and is reviewing it; he said the route has no fixed structures that would impede the loads. Road construction schedules are being checked and bridge and pavement capacities compared.

Chris Allard, senior project manager for ExxonMobil, said the company will continue to pursue permits for the full-sized modules to travel on Highway 12 through Idaho and Montana. “We have met or exceeded the requirements typically imposed on other oversize load shippers that have used the U.S. 12 route,” he said. “However, we will also move forward with alternative routes to maintain project schedules.”

The company already has cut down 33 of the giant loads at the Port of Lewiston. Four reduced-size loads have arrived at the Kearl oil sands project by taking the Highway 95/I-90 route from Lewiston, said Bergman White, the ExxonMobil spokeswoman. At least four more are en route.

With the need to cut down the size of the loads, she said, the total number is swelling from a little over 200 to roughly 350. “We might end up using more than one route, but the goal is to get the equipment up to Canada as quickly as possible.”

Bergman White said the loads now in Pasco are full-size, but are bolted together in a way that should ease their disassembly. Reduced-size loads can be up to 15 feet 10 inches tall, 24 feet wide and 208 feet long, and weigh up to 345,000 pounds.

Only one full-size test load, three stories high and built to mimic the largest of the proposed loads on U.S. Highway 12, has traversed that route from Lewiston to Lolo Pass, Mont., where it remains parked at Lolo Hot Springs awaiting the outcome of regulatory and court fights in Montana.

On narrow Highway 12, the loads are wide enough to block both lanes of traffic and create a rolling roadblock.

The plan has prompted protests and lawsuits, along with support for the project from Idaho Gov. Butch Otter and some Idaho state lawmakers, who passed a law this year to make it harder to sue over such proposals.

Highway 12, a designated state and federal scenic byway, runs along two wild and scenic river corridors dotted with campgrounds, hot springs and historic sites, and roughly follows the route taken by explorers Lewis and Clark into the region two centuries ago.