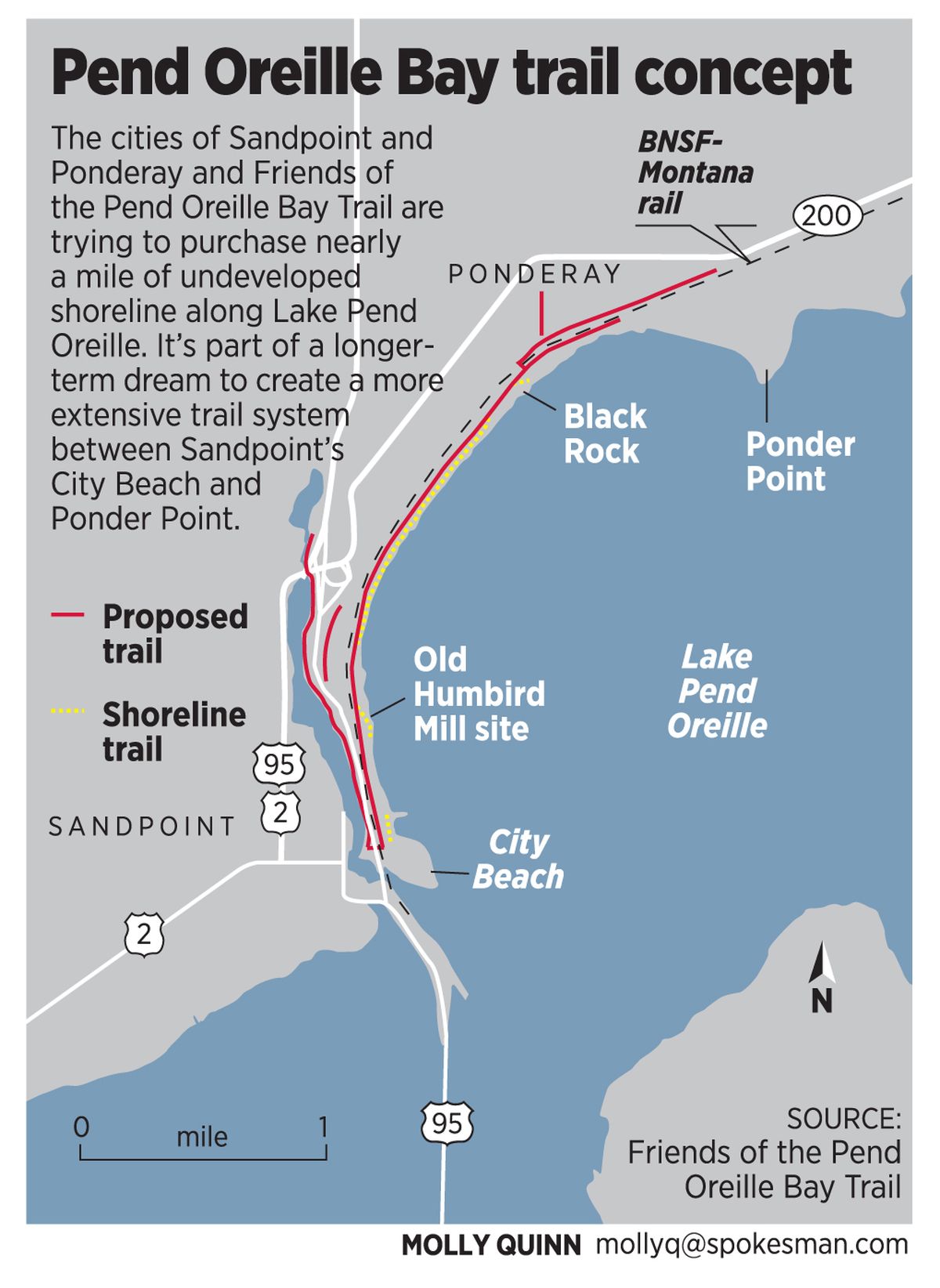 Just a short stroll from downtown Sandpoint, a dirt trail follows Lake Pend Oreille’s shoreline past groves of leafy cottonwoods that block out the sights and sounds of the bustling resort town.

Instead of traffic, trail users hear lapping waves and the musical cadence of song sparrows. To the east, they can watch storm clouds gathering over the Cabinet Mountains.

The privately owned trail is one of Sandpoint’s best kept secrets. But through a $1.6 million deal negotiated with the heirs of the late Sandpoint photographer Ross Hall, local cities and a nonprofit group hope to secure almost a mile of the undeveloped shoreline for public use.

“This is Sandpoint’s Tubbs Hill,” said local architect Jon Saylor, drawing parallels to Coeur d’Alene’s popular hiking trail. “You’re looking at one of the most fabulous views in Sandpoint … It is absolutely beautiful all times of year.”

The deal calls for acquiring the property through four purchases of about $400,000 each, which would put nearly 4,800 feet of shoreline under public control. As envisioned, the city of Sandpoint would buy the first two parcels over the next two years. The city of Ponderay would buy the third parcel during the third year, and a nonprofit group – Friends of Pend Oreille Bay Trail – would raise the money to purchase the final parcel during the fourth year.

Attorney Stephen Snedden negotiated the deal with the Hall family. “A mile of waterfront is such a rare opportunity,” said Snedden, who’s also a Sandpoint city councilman. “We’d be very lucky to acquire this.”

Last week, Sandpoint’s City Council identified $400,000 to buy the first parcel and included the money in the city’s preliminary budget, which will be finalized next month. The $400,000 would come from special funds in the city’s Parks and Recreation Department.

Meanwhile, the Ponderay City Council has written a letter supporting the project, while the city’s staff identifies possible funding sources for purchasing the third parcel.

“I think we’re all very positive that this is the right direction to go,” said Carol Kunzeman, Ponderay’s mayor. However, “we have to show them the money.”

Friends of the Pend Oreille Bay Trail envision the Hall property as part of a longer corridor that could someday stretch 1 ½ miles from Sandpoint’s City Beach to Ponder Point in Bonner County. The conceptual plan includes a bike path as well as a walking trail and additional beach access. While parts of the shoreline remain in private hands, the nonprofit group said that buying the Hall property would go a long way toward advancing their goal.

Ross Hall and his wife, Hazel, bought the property along Sandpoint’s neglected waterfront in 1966. At the time, the slice of land between the railroad tracks and the lake was known as “Bum Jungle” because of its transient camps.

The family began talks with the city of Sandpoint in 1981 about selling the land for a public trail. Efforts to secure federal money for the project failed, though the city later bought smaller sections from the Halls. The couple’s sons, Dann Hall and Robert “Ross” Hall, eventually inherited the property. The Halls allow members of the public to walk on their land, but ask them to register online and respect the property.

Dann Hall declined to comment on the pending deal, but said he has fond memories of time spent on the lakeshore. One summer, he camped out there. A 4 a.m. train whistle woke him up at dawn. He used the 7 a.m. train as an alarm clock.

The shoreline is lush with native plants, including red osier dogwood and lady’s slipper. Trail users have spotted great horned owls, moose and even a cougar in the woods.

“It’s sort of like a sanctuary in our urban center,” said Susan Drumheller, an Idaho Conservation League employee who’s also a board member for Friends of the Pend Oreille Bay Trail.

Ironically, the natural-looking shoreline was once Sandpoint’s industrial hub. Through the 1930s, the railroad served the Humbird sawmill, which stored its logs in Lake Pend Oreille. Farther down the bay, a short-lived smelter was built to process ore from local mines.

The Idaho Department of Environmental Quality received $650,000 in federal stimulus funds to evaluate old industrial sites for pollution along Pend Oreille Bay, which includes more than the Hall property. Site investigations will begin after Labor Day. A list of clean-up alternatives is expected later this year, said Steve Gill, a DEQ brownfield specialist.

“This is the birthplace of Sandpoint,” Drumheller said. The lakeshore’s tie to industry could be acknowledged through interpretative signs along the trail, she said, or a platform for watching trains.

Saylor, the local architect, walks the trail four to five times each week. He’s also a board member of Friends of the Pend Oreille Bay Trail.

For a nonprofit to raise nearly $400,000 is a tall order, but Saylor said he’s confident the group can meet the fundraising goal.

“We don’t think that will be a problem at all,” he said. “People so love that trail.”