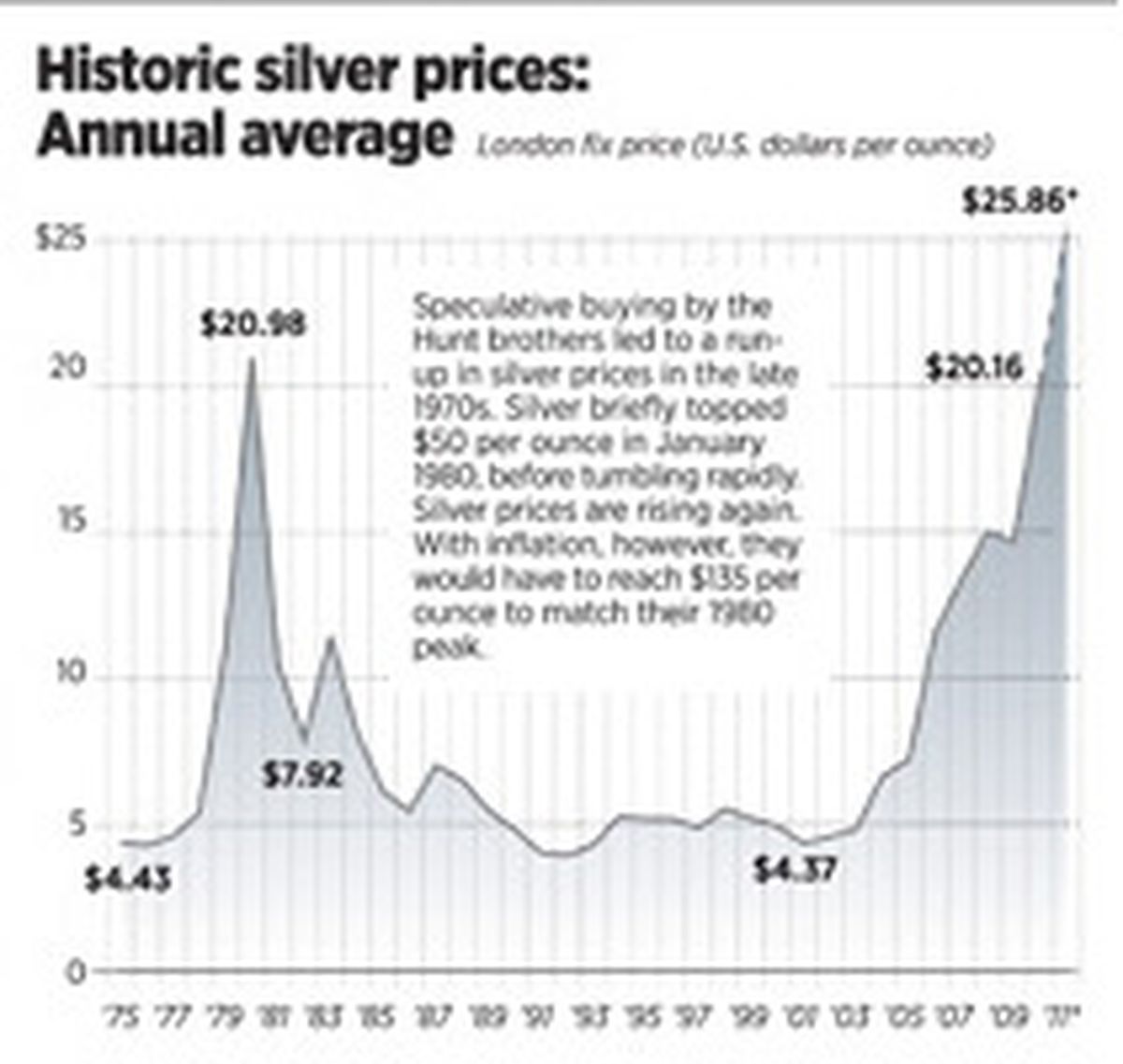 Silver prices are flirting with $50 per ounce for the first time in decades.

In North Idaho, that inevitably brings back memories of Nelson Bunker Hunt and his brother William Herbert Hunt – two Dallas billionaires who tried to corner the silver market.

The brothers used their profits from Libyan oil fields to begin quietly buying up silver during the 1970s, a time of high inflation. At one point, the Hunts controlled an estimated 110 million ounces of silver. They were also major stockholders in the Sunshine Mine near Kellogg. During the Hunts’ high-stakes gamble, the price of silver briefly shot above $50 per ounce in January 1980. The brothers’ speculative buying came to an abrupt end when commodity exchange rules were modified, forcing the Hunts to put up money they didn’t have or quickly sell off their silver stocks.

Silver prices tumbled rapidly over the next two months, and so did the Hunts’ fortune. By some accounts, they lost $1.7 billion.

Michael DiRienzo, executive director of the Silver Institute in Washington, D.C., said the current run-up in silver prices is a much different scenario. Silver prices have been rising steadily since 2006. Both investment demand and growing industrial use are contributors, DiRienzo said. In addition to fabrication demand for jewelry, silver is an industrial metal, used in electronics because of its conductivity.

But some of the same economic jitters that existed in the 1970s are still around today, DiRienzo said. He credits them for record sales of silver bullion and coins, and silver’s most recent upswing. Since the beginning of 2011, silver prices have shot up nearly 50 percent.

Silver touched $49 per ounce last week before retreating to the $44 range during Monday’s trading.

“There’s a whole host of reasons that people are taking an interest in precious metals,” DiRienzo said. “The U.S. dollar’s performance overseas, the U.S. debt … unrest in the Middle East, inflation.”

When the Hunts started buying up silver, they were looking for a safe haven for their wealth, according to news accounts from the time.

The Hunts had quietly started buying silver in the early 1970s, when silver was trading for about $2.50 per ounce. At one point, the brothers were believed to control one-third of the world’s silver supply, outside of the silver stocks held by governments.

In 1979, the price of silver shot from $6 to $48 per ounce. The jeweler Tiffany & Co. took out a full-page advertisement in the New York Times, blasting the Hunts for “hoarding” silver and driving up prices.

In Idaho’s Silver Valley, local residents watched the price trajectory of their hometown metal with pride and awe. Skyrocketing prices drew national attention to the valley.

“Listen, it was heady times,” said David Bond, a Wallace-based mining writer for McGraw-Hill, who was the editor of a local newspaper at the time.

“60 Minutes” co-founder Harry Reasoner stayed at Wallace’s Stardust Motel while crews filmed a segment at the Lucky Friday Mine. The Hunts had visited the Silver Valley earlier, taking an underground tour at the Sunshine Mine in 1977.

“I didn’t meet any of them, but they were here,” said Jerome Bunde, an agent for Pennaluna & Co., a local brokerage firm with a long history in mining stocks.

The Silver Valley was a much different place at the time. The mines were booming, with the Lucky Friday, Bunker Hill, Star, Sunshine, Coeur, Galena and Crescent all in operation.

Most of the valley’s wage earners drew paychecks from the mines. The pay was good and the prosperity spilled over into an active nightlife.

“You’d be able to walk into a bar and find live music,” said John Amonson, the former director of the Wallace District Mining Museum. “There was a lot of money to spend on entertainment. … People went out for dinner, for dancing and for drinking.”

About a dozen bars flourished in Wallace, along with houses of prostitution. Kellogg had its own nightlife scene.

With silver so valuable, thefts of sterling silver, silver coins and silverware became common. Jack Lyman, the Idaho Mining Association’s executive vice president, recalls getting a special rider on his homeowner’s insurance to cover the flatware he and his wife had received for their wedding.

There was a corresponding flurry of prospecting activity in the Silver Valley, said Pennaluna’s Bunde. With the Spokane Stock Exchange still in existence, it was easier to organize small, publicly traded companies to raise money for exploration drilling.

But the exuberance was short-lived. The Hunts had borrowed heavily to finance purchases of silver contracts, according to news accounts. On Jan. 7, 1980, the commodities exchange rules were changed, requiring silver buyers to put up more of their own money. When the price of silver dropped, the Bache Group, which owned one of the nation’s largest brokerage firms, issued a $100 million margin call on the Hunts.

The brothers were unable to meet their obligations, which rattled world commodities markets. The date, March 27, 1980, became known as “Silver Thursday.”

Though the Hunts steadfastly maintained their innocence, a federal jury found them guilty of conspiring to corner the silver market. They later filed for bankruptcy. The brothers each paid $10 million in fines to the Commodities Futures Trading Commission and were banned from trading in American commodity markets.

“The happiness of $45 silver was long-forgotten with the bitterness of $4 silver,” Bunde said.