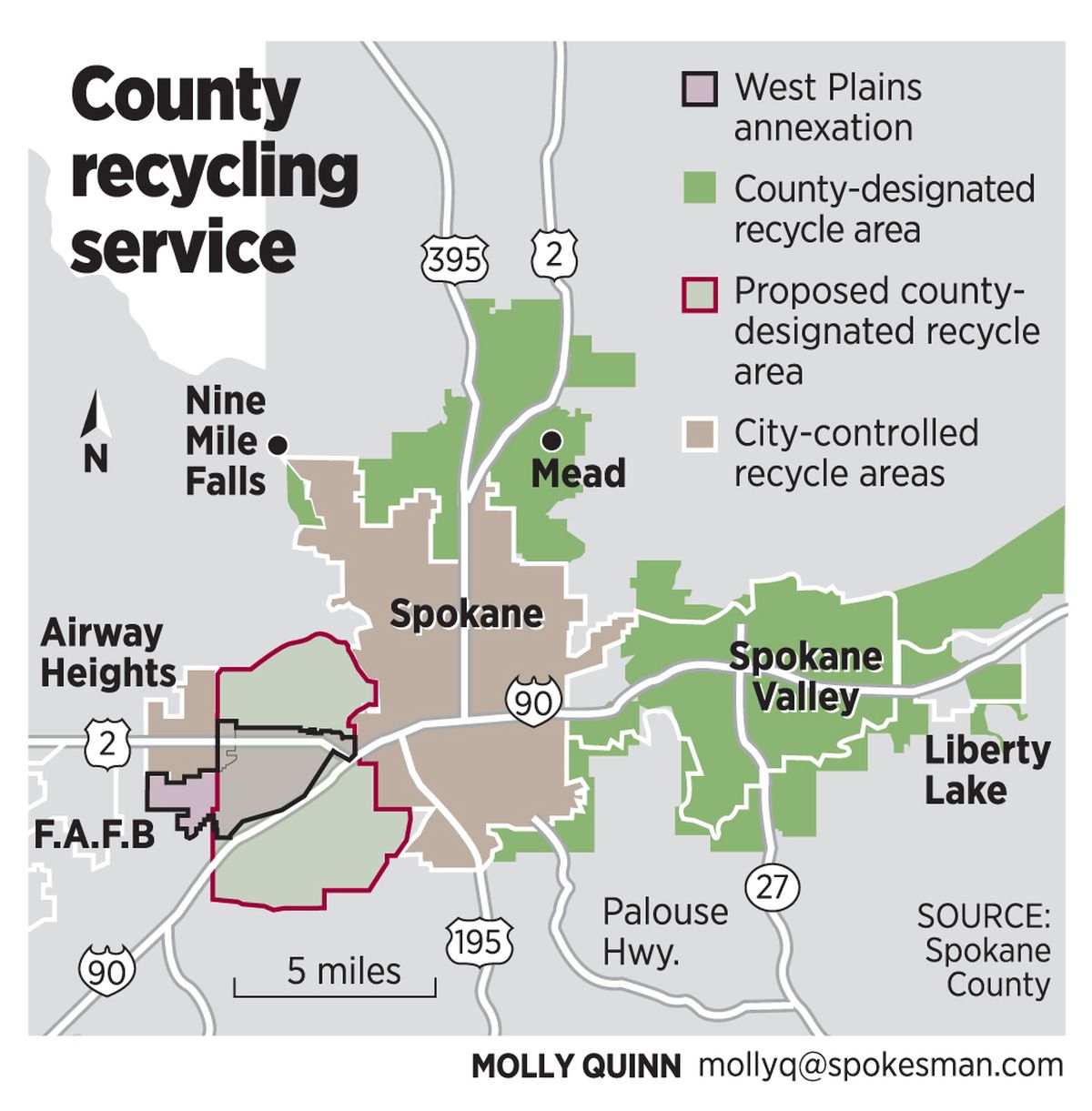 Spokane County commissioners were briefed this week on the proposal, which calls for them to designate the area “urban” for garbage purposes.

The same system applies in unincorporated suburbs north and east of Spokane as well as in cities – such as Millwood and Liberty Lake – that haven’t exercised their right to take control of garbage collection.

Except where cities assert their authority, state law authorizes county commissioners to designate urban areas in which recycling service is tied to garbage service. Customers can’t have garbage service without recycling in those areas.

Commissioners have added a number of areas to its “service-level” ordinance at residents’ request, but Sunshine is asking them to act without a customer petition.

The company’s still-fluid proposal would apply to much but not all of its West Plains territory, including areas Spokane and Airway Heights will annex on Jan. 1. Sunshine’s right to provide recycling service in the annexation areas would be locked in for at least seven years.

State law requires cities that control their own garbage – as Spokane and Airway Heights do – to wait seven to 10 years before taking over garbage franchises granted by the Washington Utilities and Transportation Commission.

Spokane Valley is in such a waiting period with Waste Management.

Sunshine’s owner, Mark Torre, said the company wants to provide improved service to some 1,266 customers before city taxes add about 6 percent to their utility bills in Airway Heights and about 22 percent in Spokane.

Spokane Solid Waste Director Scott Windsor noted the city already requires curbside recycling. However, he cautioned that the city will control what materials are recycled in the annexation area – and the city’s list includes glass and batteries, which Sunshine wants to ignore.

Regional manager Steve Wulf said the company wants to introduce a limited version of “single-stream” recycling, in which materials are dumped together into a truck instead of being hand-sorted by the driver.

Wulf said batteries pose a fire hazard in trucks full of paper and plastic. Glass has little or no value and reduces the value of other materials, he said.

Torre said Sunshine might set up a glass-collection bin at a convenient location.

Wulf said keeping glass out of curbside recycling containers would give Sunshine a choice of two processors: Waste Management, which is building a plant that can segregate glass, and Spokane Recycling, which can’t handle glass.

“As a customer, I’m telling you, that would be a challenge,” Commissioner Mark Richard said.

“We’d just as soon continue to take those items and process them the way they should be,” Gimpel said.

Commissioners called for Sunshine to confer with all the interested parties and come back with a formal proposal.