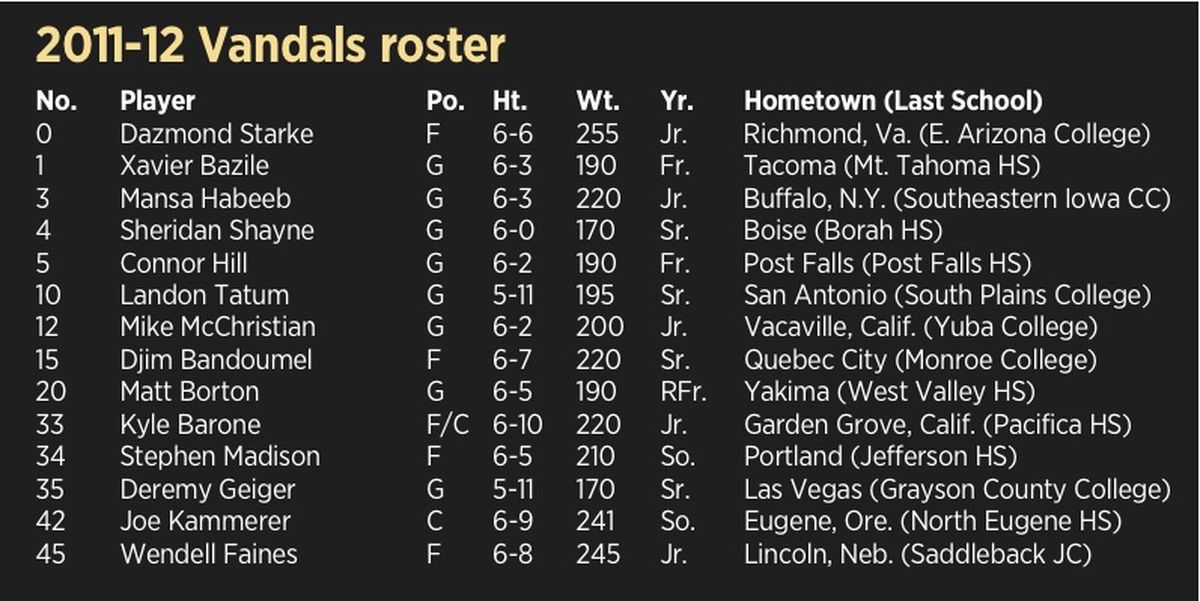 MOSCOW, Idaho – It’s developing into an almost yearly exercise for the Idaho men’s basketball team. The Vandals round up lots of new faces to bring to the Palouse, and the coaching staff scrambles to get the remade roster to coalesce.

Don Verlin, who will embark this week on his fourth season in charge of the program, has just one full-time starter returning and six newcomers – four junior-college transfers and two freshmen.

As of last week, Idaho’s rotation was far from locked into place. It was so unsettled, in fact, that Verlin acknowledged he and his assistants had yet to make progress beyond solidifying the first four starting spots.

But the Vandals will still lean on a core of returners, led by 6-foot-10 junior forward Kyle Barone and senior guards Deremy Geiger and Landon Tatum.

Geiger and Tatum, similarly sized JC products who alternated at point guard last year, will start in the backcourt together. And they’ll focus on feeding Barone and the Vandals’ much meatier interior lineup.

Barone, a preseason second-team All-WAC selection, was the Vandals’ second-leading scorer last year – despite starting only nine games. He will move from center to the more natural power forward spot after the addition of JC transfer Wendell Faines (6-8, 245 pounds) and the progression of redshirt sophomore Joe Kammerer (6-9, 241).

The Vandals also have 255-pound Dazmand Starke, who originally signed with UTEP, and 6-7 Djim Bandoumel, who sat out most of last season with academic issues.

“We’ve been talking about that since the beginning of the year – we’ve got a lot of big guys this year,” Barone said. “I think this year we’re definitely going to be more physical down low.”

Aside from more interior depth, Verlin is excited about what he views as the most promising freshman tandem in his time in Moscow. Connor Hill of Post Falls and Xavier Bazile of Tacoma have both made strong enough impressions in the preseason that Verlin might push the guards into action rather than redshirt them.

“Those two guys are going to be two real good players in our program,” he said.

After an 18-14 season and third-place WAC finish last year, it’s clear the Vandals’ talent base is improving. But the roster churn has been pronounced under Verlin.

Mike McChristian and Starke were late signees in the fall after spots opened when Luiz Toledo departed to play professionally in Brazil and two freshmen – Renaldo Parker and Gary Winston – left the program early last season.

McChristian, a guard/wing, will be the team’s third point guard and help take the place of Shawn Henderson, the team’s best defender last year. The Vandals will also rely on sophomore Stephen Madison and Geiger – as well as potentially Hill or Mansa Habeeb, another newcomer – to replace Jeff Ledbetter’s outside shooting.