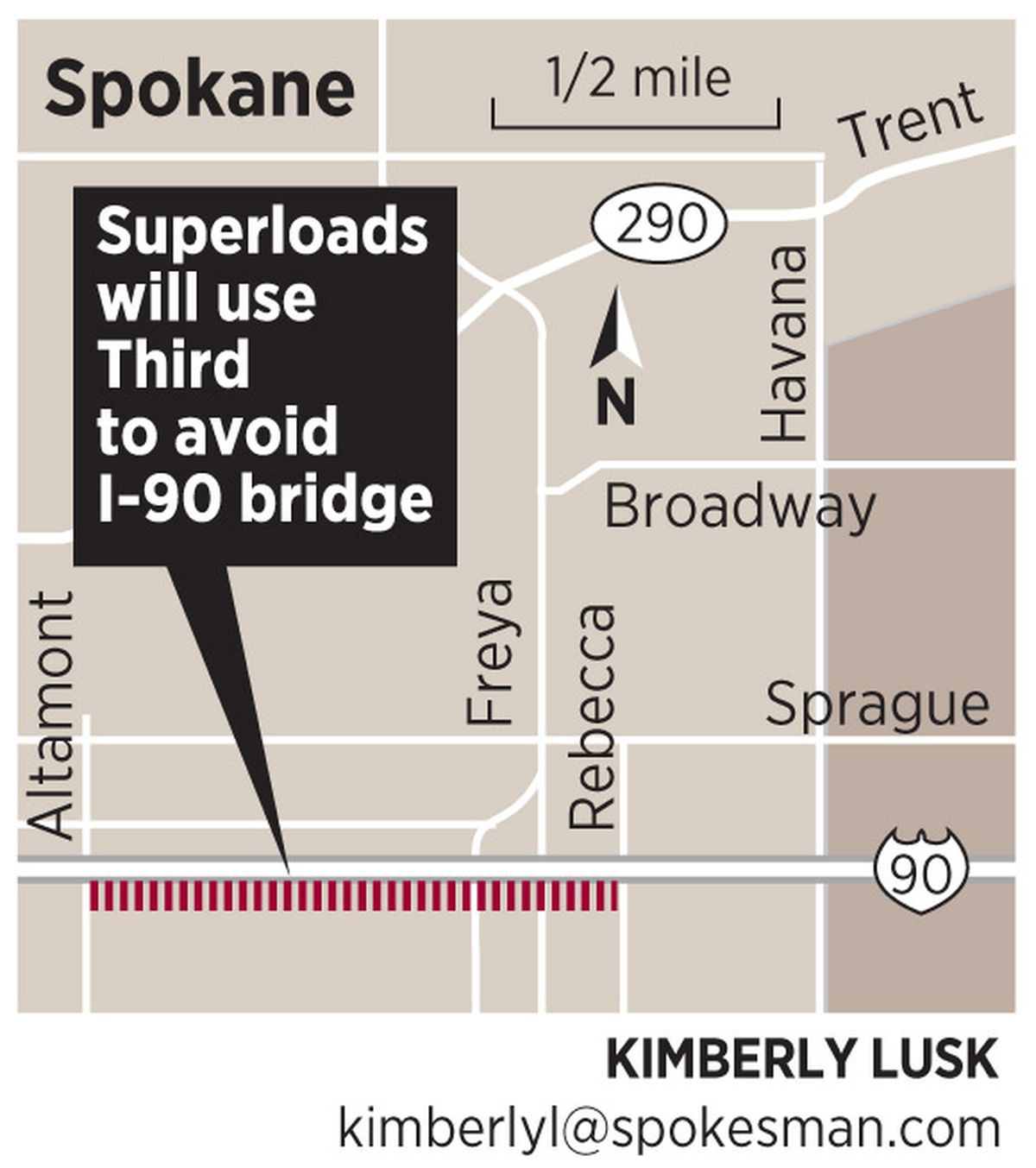 A series of superloads coming through Spokane will travel down a portion of Third Avenue during the next several months because they don’t fit under a bridge over Interstate 90.

Residents along the affected stretch of Third received notices Oct. 11 from the city of Spokane Neighborhoods Services stating the loads would exit I-90 at Altamont Street and travel down Third for several blocks because they are too big to fit under the nearby pedestrian bridge. They will re-enter the interstate at Rebecca Street.

The loads are coming from Pasco and passing through Spokane on eastbound I-90, but no officials could confirm where they are going, what they will be hauling, or whether they are the controversial Imperial Oil/ExxonMobil “megaloads” that were rerouted earlier this year from Highway 12 in Idaho. Those loads have since been cut down in size.

It is unknown exactly when the loads will pass through, but Al Gilson, state Department of Transportation spokesman, said they are permitted to travel between 11 p.m. and 5 a.m.

They’re being hauled by Mammoet – the same company that is shipping oil equipment for Imperial Oil/ExxonMobil to Alberta. The loads will weigh 200,000-plus pounds with a total width or height exceeding 16 feet.

“It’s important to note that we have superloads coming through here all the time,” he said, adding officials expect minimal traffic delays.

Shipments will continue for several months, said Jonathan Mallahan, neighborhoods council director. About 250 loads are expected to travel along I-90, with about 150 rerouting to Third Avenue.

Mammoet is required to put up a $1 million bond to cover any damage to the infrastructure, and pre- and post-inspections will be done to look for damage, Mallahan said.

At least one neighbor expressed concern about road damage that may show up in the future and wondered who would foot the repair bill and how long would residents have to drive on a damaged road. However, Mallahan said, “If damage was to present itself in the future, there’s no real way to make a causal relationship. It’s a busy road and we wouldn’t be able to make the point that the damage was necessarily caused by those loads.”

But many residents of Third Avenue say they aren’t worried. Vin Bumpus said she gets a kick out of watching large loads go by and is excited for them to start rolling through.

“I think it’s great,” she said. “It makes you think, ‘Oh, the economy must be getting better.’”

She added, “There has never been no congestion or anything. They just cruise along.”