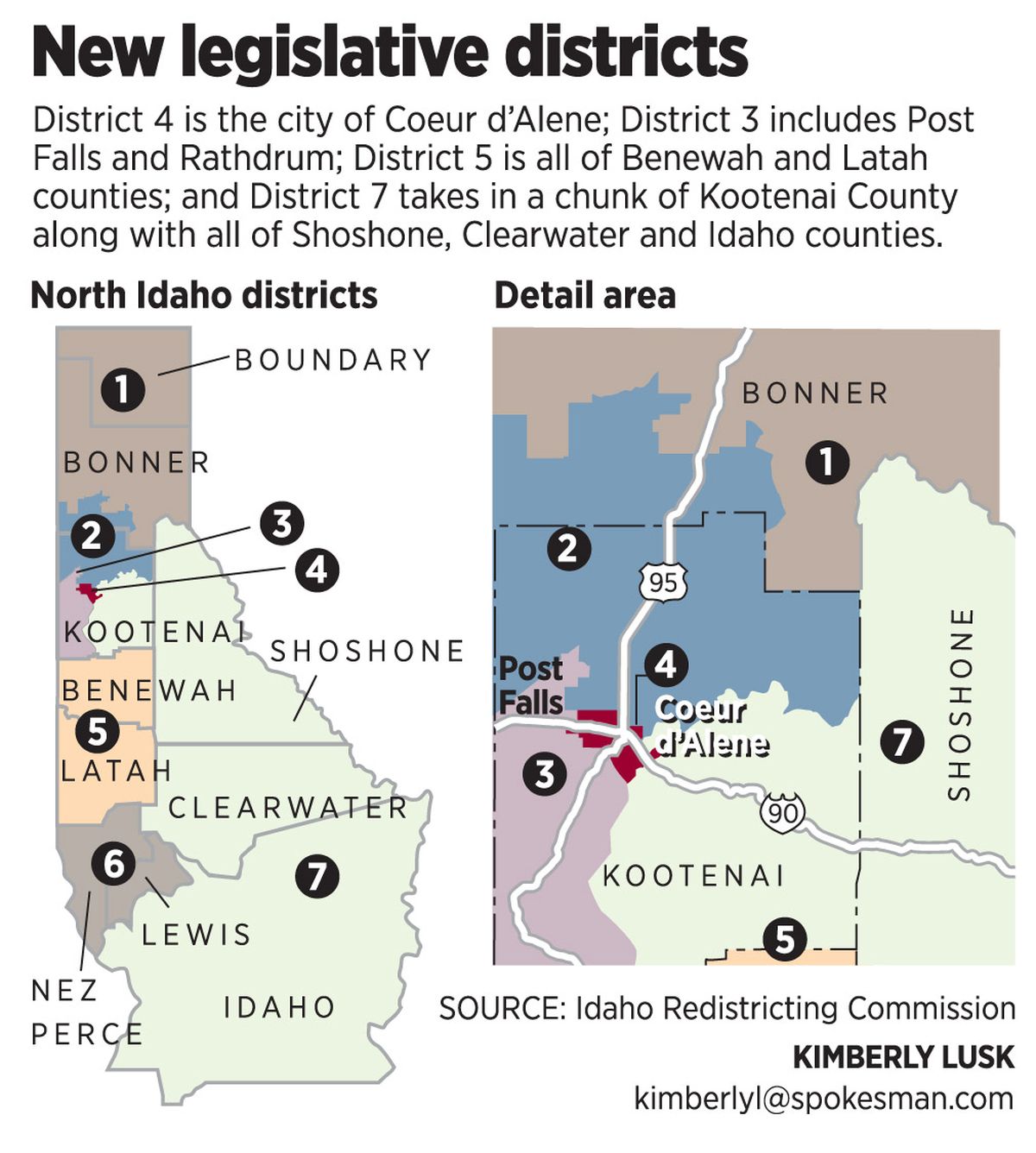 BOISE – Idaho legislators or candidates who don’t like their new districts have just two weeks to move if they want to run elsewhere.

That’s just one of the many ripples sent across Idaho politics by the state’s new legislative redistricting plan, from ending the Senate career of a four-term North Idaho lawmaker to prompting a game of political musical chairs in districts from St. Maries to Idaho Falls.

“I’m not willing to move to possibly retain a Senate seat,” said Sen. Joyce Broadsword, R-Sagle, who’s opting not to seek a fifth term rather than run against close friend and ally Sen. Shawn Keough, R-Sandpoint; the new plan puts both in legislative District 1.

“We live on ground that was homesteaded by my husband’s grandparents,” Broadsword said.

She’s decided to bow out instead when her term ends in 2012, and support Keough, vice-chairwoman of the key legislative panel that writes the state budget. “She is too valuable to the folks of North Idaho to lose her in the Senate,” Broadsword said.

Keough, who plans to seek a ninth term, praised Broadsword and noted that she still has another year to serve. “She does an outstanding job for the constituents in District 2,” Keough said.

Legislative candidates must live in their district for a year before the election. The next election is Nov. 6, 2012, so by Nov. 6 – two weeks from today – anyone moving would have to get it done.

There will be five open Senate seats and 10 open House seats due to redistricting. It’s possible that lawmakers who now face other incumbents may move across the line to try for those open seats, or that House members in crowded districts may switch over and run for an open Senate seat.

That could be the case in District 8, where there’s an open Senate seat, but five House incumbents, including House Speaker Lawerence Denney and Assistant Majority Leader Ken Roberts.

Trail said he will seek a ninth term in the House; Ringo is in her sixth term, as is Harwood. “We don’t know how it’s going to shake out yet,” Trail said.

That’s because it’s entirely unclear which of the two might have to face off.

“It’s totally up to them, totally how they file,” said Idaho Secretary of State Ben Ysursa. Although lawmakers are designated as serving in either Seat A or Seat B, “They don’t have to file for their same alphabetical designation or anything. It’s up to them.”

Six of Idaho’s new House districts, including District 5, contain three incumbents, and District 8 contains five. But each district has just one Senate seat and two House seats. That’s led to last-minute drama after past redistrictings, as candidates wait to see which designation others choose so they can decide whom to challenge. Others file early, staking a claim to an A or B seat and letting whoever wants to challenge them make the choice.

There have been cases where a candidate’s filed for one seat, then withdrawn. To switch seats, new paperwork and a new fee is required.

“I’m not saying it’s never come up before – it has,” Ysursa said. “People like to play games and withdraw and re-file.” He noted ruefully of Idaho’s fee for legislative candidate filings, “$30 is hardly a deterrent.”

Another political ripple from redistricting could affect two state laws passed in 2009 that left Idaho’s first redistricting commission this year at an impasse: The three GOP members insisted on following those laws, which required a supermajority to split precincts or draw districts without connecting roads; while the three Democratic members said the laws were unconstitutional, because the Idaho Constitution requires just a four-vote majority to approve a new plan. They noted that the constitution also makes avoiding splitting counties a top concern, above either of those questions.

The second commission, appointed after the first panel deadlocked, voted unanimously to suspend both laws, and all six members said the ban on splitting precincts made no sense and should be repealed. Precincts are redrawn by counties right after the redistricting process; some are so outdated they cut through houses. Several members said the road law was unnecessary, too, although the commissioners paid attention to road connections where they could.