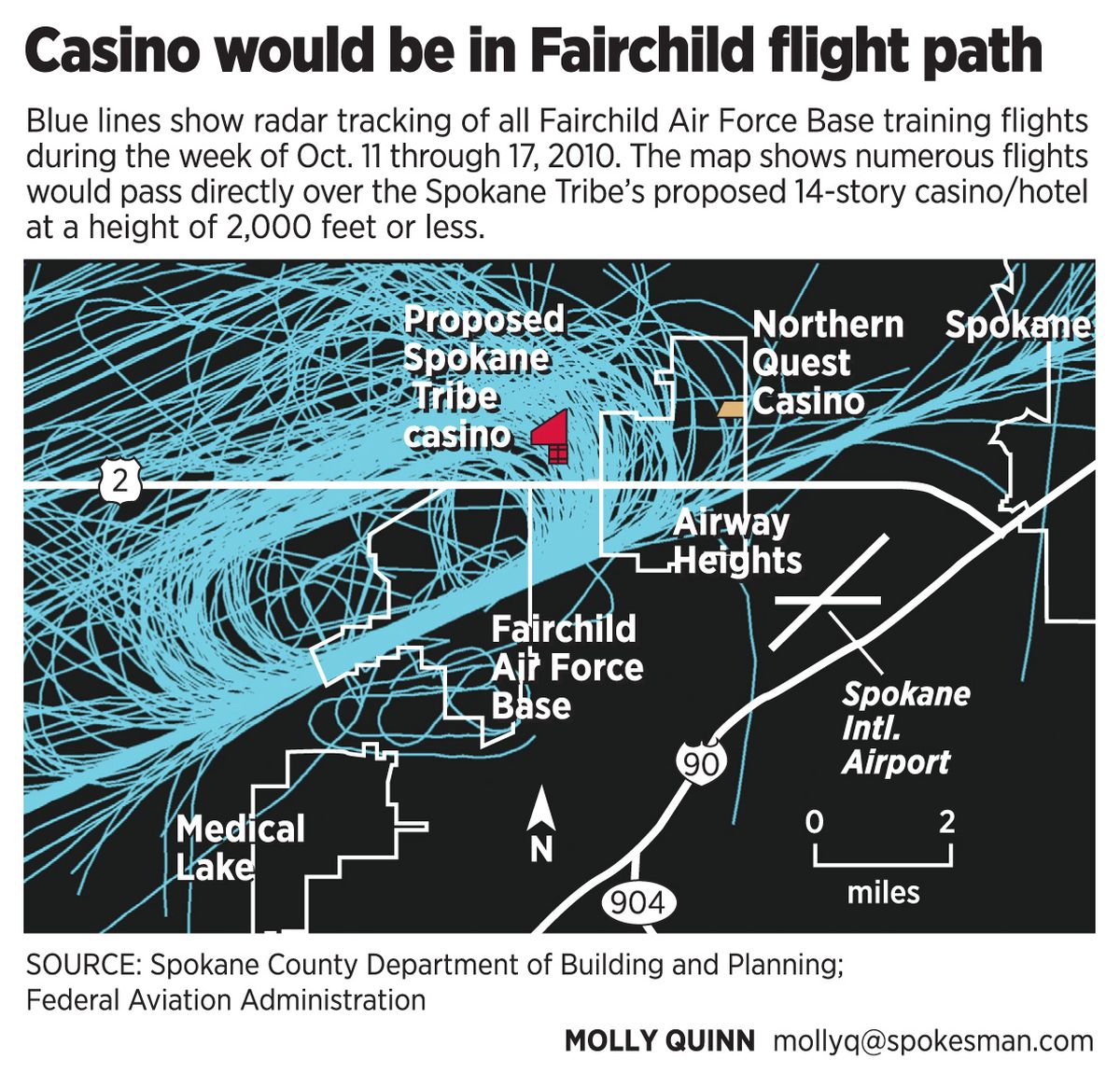 A contract that requires Spokane County to remain neutral on a proposed Spokane Tribe casino provides for annual payments in lieu of taxes. The county and Airway Heights are to split annual payments that rise from $14,500 to $245,073 after 15 years. So far this year, the county has received $2,900.

A similar contract with the Kalispel Tribe required the county and Airway Heights to drop federal appeals to block the Northern Quest Casino. It provided joint payments rising from $25,000 to $386,250 after 15 years.

A contract that requires Spokane County to remain neutral on a proposed Spokane Tribe casino provides for annual payments in lieu of taxes. The county and Airway Heights are to split annual payments that rise from $14,500 to $245,073 after 15 years. So far this year, the county has received $2,900.

A similar contract with the Kalispel Tribe required the county and Airway Heights to drop federal appeals to block the Northern Quest Casino. It provided joint payments rising from $25,000 to $386,250 after 15 years.

County commissioners couldn’t say a word this week when business leaders appealed for help in defending Fairchild Air Force Base.

They were gagged by an agreement to remain silent in exchange for payments to offset the effects of a proposed Spokane Tribe casino and hotel development.

Commissioner Mark Richard defended the intergovernmental agreement that requires commissioners to remain neutral on the West Plains casino project, which is under consideration by the U.S. Department of Indian Affairs.

Commissioners Al French and Todd Mielke are looking for ways to regain their ability to influence the decision on permitting a 14-story casino hotel directly in the path of routine Fairchild training flights.

The proposed structure is the sort of “encroachment” that would weigh against Fairchild in another round of military base closures expected in 2014, according to Greg Bever, past chairman of Greater Spokane Incorporated.

“We need the county’s voice on this issue,” Bever told commissioners Tuesday, speaking as chairman of the economic development organization’s Forward Fairchild committee.

Bever and Greater Spokane President Rich Hadley formally opposed the tribal casino in a Sept. 12 letter to the Bureau of Indian Affairs.

“We are concerned that the 4,500 jobs at FAFB will be placed at risk if a major casino resort complex is developed ‘across the street,’ ” they wrote.

In addition to navigational interference, they cited concerns about putting large concentrations of people in the path of hundreds of monthly flights at less than 2,000 feet from the ground.

The base is “too important to put at risk,” Hadley and Bever told federal officials.

Bever is publisher of the Journal of Business, a subsidiary of Cowles Co., which also owns The Spokesman-Review.

Richard said he usually agrees with Greater Spokane positions “almost across the board,” including protection of Fairchild Air Force Base, and felt “kind of ambushed” by Bever’s comments.

He said he doesn’t favor proliferation of off-reservation casinos, but supports the Spokane Tribe’s Airway Heights venture as a matter of fairness.

The Kalispel Tribe already has an Airway Heights casino, but the Spokanes are “the tribe for which this community is named,” Richard said.

Casino supporters have said Fairchild is “neutral” about the proposal, but base officials said this week that they have not yet taken a position.

“We will be evaluating the environmental impact statement as it becomes available and (will) look closely at proposed development and future growth in conjunction with our current flight operations,” base officials said Wednesday.

Spokane Tribe Chairman Greg Abrahamson said Wednesday that the project poses no navigational threat to Fairchild or the nearby Spokane International Airport.

He pointed to a Nov. 3 ruling by the Federal Aviation Administration that the tribal hotel tower wouldn’t interfere with navigation and needn’t have warning lights or markings.

“The tribe has met with Fairchild officials and no so-called ‘encroachment’ issues have been identified,” Abrahamson said in a press release.

He said the development, on 140 acres at the western edge of Airway Heights, is expected to generate 3,800 permanent and part-time jobs. It will include retail shops, medical offices and a tribal cultural center.

“We looked very carefully at what impacts it would have on Fairchild,” Rushing said. “About 80 percent of our city is attached to Fairchild in one way or another.”

“I find it disingenuous to continue to rant about how this is somehow encroaching on Fairchild,” Mager said. “One of the first things I did was to go and speak to the base commander, and he assured me that there was no problem.”

Mager and Richard voted for the agreement that committed the county to official neutrality on the casino. Mielke dissented on grounds that commissioners hadn’t conducted a public hearing.

“I’ve been extremely frustrated with that contract,” Mielke said in an interview this week.

Originally, Mielke said, the agreement called for the county to support the casino venture, but he said, “Absolutely not.”

When he was state representative, Mielke said, “it was always drilled into me … that you cannot bind the hands of a future legislature.”

French, who unseated Mager last November, didn’t get to vote on the agreement that prevents him from trying to steer the county in a different direction.

“I would very much like to talk because I’ve got constituents saying, ‘Why aren’t you representing our interests? We elected you.’ ” French said in an interview.

He said he questions the legality of the restriction, but his personal attorney and the commissioners’ attorney, Jim Emacio, both have told him he faces personal liability if he violates the contract.

An attorney general’s opinion would carry weight in a court but wouldn’t guarantee success. Still, Mielke said he would be inclined to speak out with support from the attorney general.

“The community has a lot at stake,” he said. “Fairchild is the largest employer in the region.”