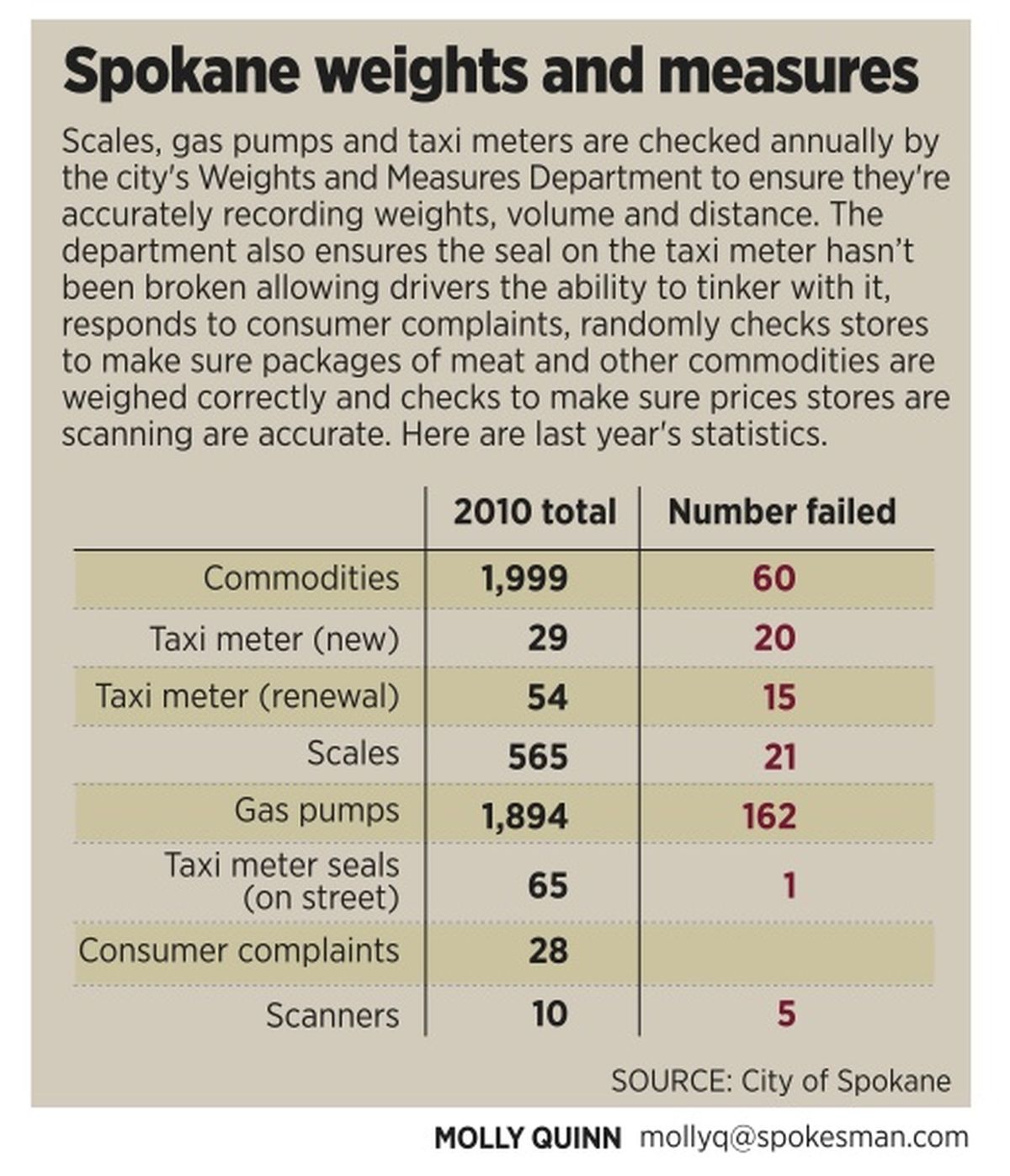 Steve Parker squeezes the handle on the gas pump for a final jolt to hit 5 gallons.

The station’s pump records 5 gallons. If he were a normal customer, he would pay for 5 gallons.

But Parker is not a normal customer, and he didn’t quite pump 5 gallons. It’s short by 3 1/2 cubic inches.

“This is kind of disappointing,” Parker says in a tone that indicates that he truly is disappointed.

Parker is Spokane’s sealer, the last remaining watchdog over gas pumps and grocery scales and scanners in the city of Spokane’s Weights and Measures Department. Each year he checks every scale used to determine how much a customer pays, usually in grocery delis or checkout lines. He checks every regular-grade gas pump. He checks every taxi meter. He checks about half of premium gas pumps. He randomly checks a dozen or so stores to ensure scanners charge the advertised price. He randomly enters grocery stores and weighs packages of meats and cheeses to make sure they’re not charging for the trays and wrapping. Stores and gas stations get no warning when he comes.

On this day, earlier this month, Parker was retesting the premium-grade gas pumps at the Zip Trip station at Perry and Illinois. They were measuring slightly short when he checked them earlier this year. Enough to prevent earning his sticker of approval, but not off enough to be shut off. Gas stations usually fix problems within a day of notification, he said.

On his second check, five of six tanks remained a tad short. If every customer at every tank is shorted by 2 or 3 cubic inches for every 5 gallons, it can add up quickly, Parker said. Someone pumping 10 gallons, for example, would be shorted more than a dime’s worth of gas they paid for.

He informed the clerk that a problem remains and that if the pumps aren’t recalibrated quickly a citation is likely. The pumps were fixed the next morning, and the station avoided a citation.

Parker said his office is more concerned “with compliance than punishment.”

Parker is the last man standing in the oldest of the two remaining municipal weights and measures departments in Washington; the other is in Seattle. Spokane’s Weights and Measures Department was reduced from three workers to two in 1987; budget cuts in 2004 left just Parker.

And next year could be the end of the program unless the City Council agrees to raise fees to pay for it.

Spokane Mayor Mary Verner will present her proposed 2012 budget to the City Council on Monday. In it she will outline her strategy to close an $8 million gap between the money expected and the amount it would take to maintain current employee levels and services.

When she previewed her budget in May, Verner said the Weights and Measures, Arts and Youth departments may not survive unless the city approved new taxes or fees, because her priority is saving police jobs.

Weights and Measures is supported with about $35,000 from fees the state collects on scales and pumps specifically for that program. The rest of the department’s $101,000 budget this year comes from the city’s pool of tax revenue.

Verner said last week that her 2012 budget will include the Weights and Measures Department, but that’s only based on the City Council raising fees enough so that it no longer would need taxes for support.

“If there’s no willingness to allow it to collect sufficient revenue to be self-supporting then we would no longer have the program,” Verner said. “I’m always concerned about anyone having to absorb additional costs, especially the cost of doing business. The balance on Weights and Measures is that it’s a benefit to the business and the vendor to be able to assure the public that they have been inspected and that the customer is getting their money’s worth.”

If Spokane eliminates its program, city pumps and scales would be overseen by the state Department of Agriculture’s Weights and Measures program. Despite the cuts to Spokane’s program over the years, the city’s program remains more robust than the state’s.

Instead of annual tests, the state’s goal is to check 80 percent of scales and pumps once every three years.

Spot checking to ensure packages of meats, cheeses and other commodities are correctly weighed would end. So would any oversight to ensure stores properly price items at scanners. The state ended package and scanner testing this year after losing two of its 15 inspectors as a result of budget cuts.

Jerry Buendel, program manager for the state’s Weights and Measure program, said it’s unlikely it would add an inspector if it had to take over Spokane’s workload. He said decision-makers and citizens should be aware of the implications of cutting Spokane’s program.

But he said he also understands how difficult it is to fight for a consumer protection program when cuts also are threatened to schools and social services, or in the city’s case, police, fire, libraries and parks.

Teresa Brum, Spokane’s business and development director, said revenue options will be presented to the City Council on Nov. 7. She said one option is to adopt a model similar to Seattle’s Weights and Measures program, which collects fees from stores that have price scanners. Collecting that fee, however, would mean the city would need to step up its enforcement of price scanners since Parker currently only does about a dozen checks on those a year.

In previous cutbacks, the department gave up annual testing of premium gas pumps. Parker also scaled back how gas testing was done. Pumps used to be tested by pumping slowly and quickly. He now tests only by a full squeeze of the handle, which is how most consumers pump.

Last year, 162 gas pumps out of 1,894 failed his test. None was cited because they were fixed. Only 21 of 565 scales were inaccurate. Those also were fixed before a penalty was levied. He also found 60 packages of meats, cheeses or other goods that were incorrectly weighed or labeled. As a result, nearly 1,600 packages were pulled from sale and had to be relabeled or repackaged.

“We get really good compliance from the merchants,” Parker said.

He writes few citations. He’s only written one this year – to a gas station for not repairing a broken hose.

The lack of citations has been used as an example by some City Council candidates as evidence the department is not needed. But Parker says compliance proves it’s worth the cost. Businesses don’t often cheat in Spokane, he said, because they know they’re being watched.

David Condon, who is challenging Verner in her bid for re-election, said he couldn’t comment on revenue plans for Weights and Measure until they’re explained, but said he would consider cutting the program to help preserve police investigations or other higher priorities.

“It is a service that is provided at the state,” Condon said. “When you look at priorities of government, maybe this would be one that would be a valid thing to look at cutting if it means we could bring back the property crime division or something like that.”

Meanwhile, Council President Joe Shogan has suggested raising parking tickets from $15 to $25 to help save the city’s Weights and Measure, Arts and Youth departments.

Councilman Bob Apple said he believes the city should maintain the program, but he would prefer to use existing money for it by cutting the city’s bicycle-pedestrian coordinator or from recent increases in the urban forestry budget.

“It’s a real benefit to the citizens,” he said. “When you buy meat, there’s no thumb on the scales.”