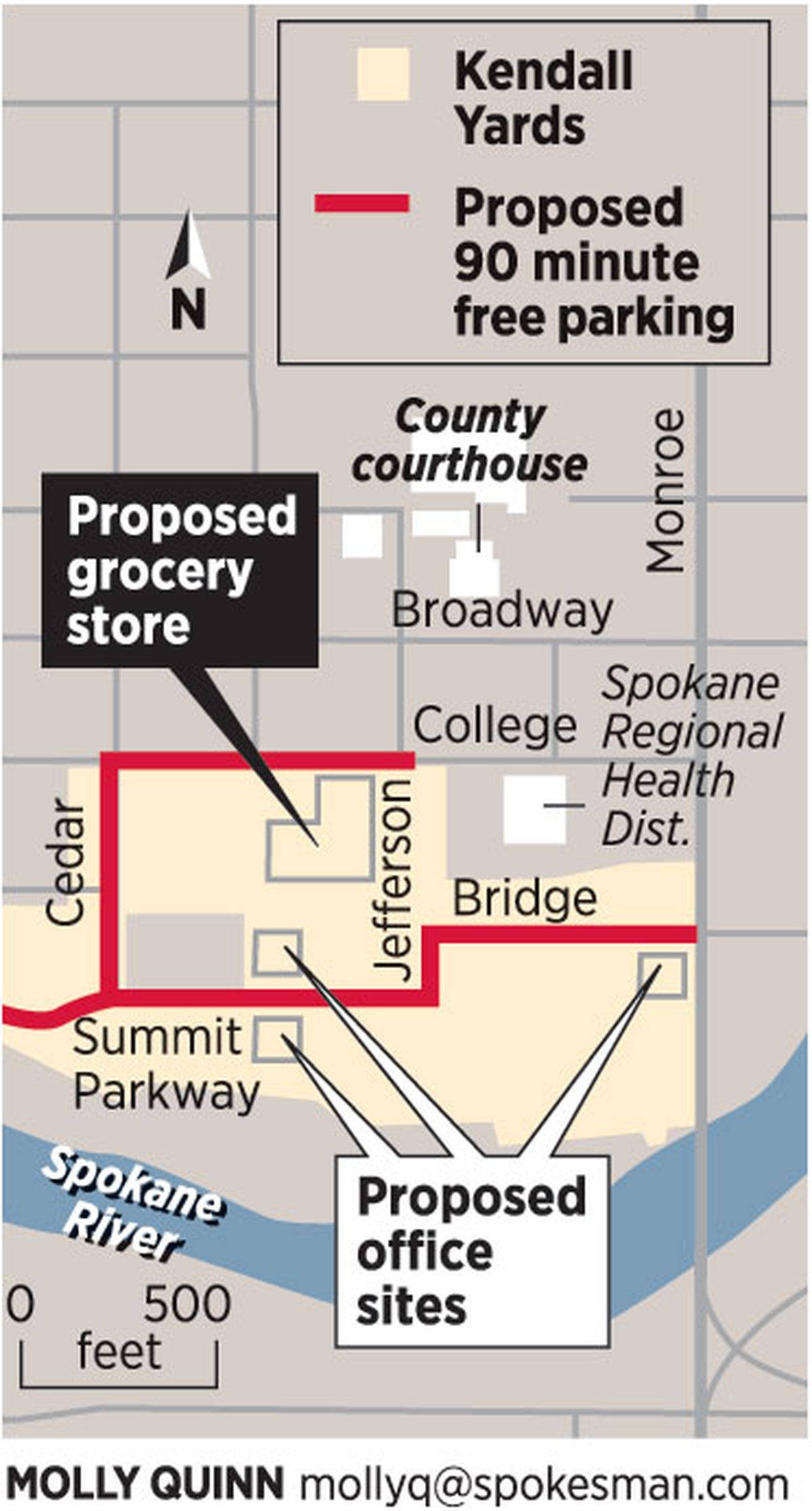 Kendall Yards is bringing home the bacon. Bread and produce, too. The mixed-use development near the Spokane County courthouse may deliver a full-service grocery store by Thanksgiving next year. One to three office buildings and more housing also are planned next year in the Greenstone Corp. project. Meanwhile, the company is working with Spokane city officials to reduce long-term parking on streets in commercial portions of Kendall Yards and to extend the Centennial Trail through the project. Proposed on-street parking changes would eliminate 90 10-hour meters in the vicinity of the courthouse, where more than a thousand employees already are on a waiting list for spaces in a county parking lot. Greenstone President Jason Wheaton said company officials are considering a variety of strategies to control parking around the grocery store site – bounded by College Avenue, Summit Parkway (formerly Ide Avenue), Cedar Street and Jefferson Street. “There’s a reason there hasn’t been a grocery store downtown, and a big part of it is the parking needs around it,” Wheaton said. Vice President Wayne Frost said Greenstone is negotiating with “established stores that the local community would recognize.” “I’m hoping to have one by Thanksgiving of 2012,” Frost said. A parking study by a Portland firm, Rick Williams Consulting, urges city officials to provide 90-minute free parking on streets bordering the grocery store complex, which would include restaurants, shops and offices. While encouraging turnover needed to support the businesses, the proposal would eliminate about three dozen of the 10-hour meters on College Avenue that county employees often use, according to Don McDowell, a county employee development coordinator whose duties include managing county parking facilities. “That sure wouldn’t help county employees at all,” McDowell said. “I’d like to have another parking lot with 36 spaces in it, I’ll tell you that.” Within a broader area that extends north to Mallon Avenue and east to Monroe Street, the parking study calls for converting 90 10-hour meters to two hours. The county has 17 parking lots with 246 metered spaces for visitors and 472 leased spaces for employees, who pay $15 a month for them. McDowell said 1,063 employees are on a seniority-based waiting list that includes people who have been on the payroll since August 1996. Greenstone and county officials have discussed the possibility of building a parking garage to serve county needs, but both sides say that isn’t financially feasible. “Hopefully, the economy will change that for us, and we’ll have to build one,” Frost, the Greenstone vice president, said. Until then, Greenstone and county officials agree that encouraging employees to carpool and take the bus is the best bet. Spokane Utilities Director Dave Mandyke said he and his staff support Greenstone’s proposed parking changes, at least those involving the 90-minute free-parking zone. “We understand the need for that,” he said. “What we have said is we’re amiable to that and we’ll give it a try.” Frost wants the changes to be in place when the grocery store opens. Parks Director Leroy Eadie and other city officials are working with Greenstone on plans to extend the Centennial Trail across Kendall Yards in two phases. Frost said he is frustrated that the first phase wasn’t completed this year, but Eadie said he thinks the work can start next spring. Eadie said Greenstone must take the lead on the trail extension, but the Parks Department is helping coordinate the route and possible tie-ins with a proposed “sculpture walk” and a cultural center the Spokane Tribe plans on Bridge Avenue between Monroe and Lincoln streets. Frost said demand for Kendall Yards property is strong, but would be “three times what we see today” if customers could “see or touch that trail.” Already, Kendall Yards has exhausted its inventory of 40 townhouse units and single-family homes near the corner of Bridge Avenue and Elm Street. Wheaton expects construction of 40 to 45 more residential units to begin within 30 days and be completed in January or February. Most of the residences will be townhouse-style structures with four or five units apiece, but a couple of single-family cottages also are planned. The townhouses are an unusual two-story design that features “one-level living” with master bedrooms next to ground-floor kitchens and “tuck-under garages” accessible from an alley behind the buildings. They’ll sell in the $140,000 to $180,000 range, Wheaton said. At least one office building also is planned next year. There could be three, Frost said. He said construction will start early next year, possibly in March or April, on one of two adjoining 8,000-square-foot office buildings near the proposed grocery store. The two-story twin structures will be on Summit Parkway, just east of the Court of Appeals building, but no decision has been made on which side of Summit. Frost said he would like to construct both buildings at the same time for the sake of efficiency. A two-story, 22,000-square-foot office building is planned on the west side of Monroe Street, just south of where Bridge Avenue will be when extended later this year. Construction of that building also will start next spring if enough tenants are lined up. “We are out on the streets getting tenants for it, and we’re seeing good success at that,” Frost said. Lawyers account for a lot of the interest because of proximity to the courthouse, but Frost said potential customers also include financial service firms and “service retail” businesses, such as insurance agencies. He said an essential element of the project is a tax-increment financing district that eventually will reimburse Greenstone for much of Kendall Yards’ public infrastructure, such as streets and utilities. The money will come from property value increases generated by the project over 25 years. “If you watch national news, Kendall Yards shouldn’t be happening, but it is,” Frost said.
Editor’s note: This story has been updated to correct the spelling of Jason Wheaton’s name.