At the east end of Coeur d’Alene, bald eagles swoop and dive over the lake as excited onlookers snap pictures or watch with spotting scopes, and others stroll by on the Centennial Trail with their dogs, enjoying the winter wildlife show.

This is where a temporary onramp will be constructed to allow three giant, Montana-bound megaloads of oil refinery equipment to complete their roundabout journey through the area in January and February and trundle back onto Interstate 90 on the far side of the tall stretch of Veterans Memorial Bridge. On Thursday night, more than 50 people turned out for a public meeting about the hauls, with questions about everything from safety to fisheries.

“It’s one of the most precious parts of this community,” said Scott Bullock, who lives in a newly built home right on Coeur d’Alene Lake Drive and the Centennial Trail. “Everybody utilizes the trail, and as a resident, I would just hope that they look at all the potential risks … and that there is a contingency plan if something does go wrong.”

An illustration of the Mammoet load rig, which is pulled and pushed by four semitrucks, measures 27 feet wide and 441 feet long. (Courtesy of Idaho Transportation Department)

The picture that emerged at the Idaho Transportation Department’s open house Thursday evening was a surprising one to many who attended: The same specialized heavy-haul company that raised the Russian Kursk submarine from the bottom of the Barents Sea has an elaborate setup to haul a new central reactor tower to the Calumet Refinery in Great Falls.

It’s coming from Bakersfield, Calif., where the Italian-made item had been brought in for a refinery there that never came together. Calumet purchased it to upgrade its refinery, which employs 115 people.

Mammoet USA South Inc. has a setup that’s 441 feet long and 27 feet wide to haul the three pieces of the tower, which make up only the center section of each load and are only about 50 feet long; the remainder of the rig consists of supports, trailers and trucks both up front to pull and behind the load to push. It steers from both ends and all its wheels turn, allowing it to pivot in several places and make the 90-degree turn from U.S. Highway 95 onto Lincoln Avenue when it approaches from the south to reach I-90. The loads were barged to the Port of Wilma, near Lewiston, and will travel up Highway 95 to the freeway. The load also can move up and down to clear guardrails and other obstacles.

Jim Hamilton, western region director for Mammoet – the Dutch word for “mammoth” – said, “You can do more with these things than you can do with your car. Really, it’s amazing.”

Chip Kachel, project manager for Mammoet and a 25-year veteran of such moves with the company, said, “This is actually transferring less weight (to the road), because we’ve got so much trailer.”

The problem is the high bridge east of Coeur d’Alene: It can’t take the weight of the whole 1.6-million-pound load at once. So the rig will exit the freeway at Sherman Avenue, travel along Coeur d’Alene Lake Drive and re-enter the freeway on the far side of the bridge just past Higgens Point, on a temporary on-ramp on the north side that’ll require the load to come across the westbound lanes, briefly blocking the freeway. 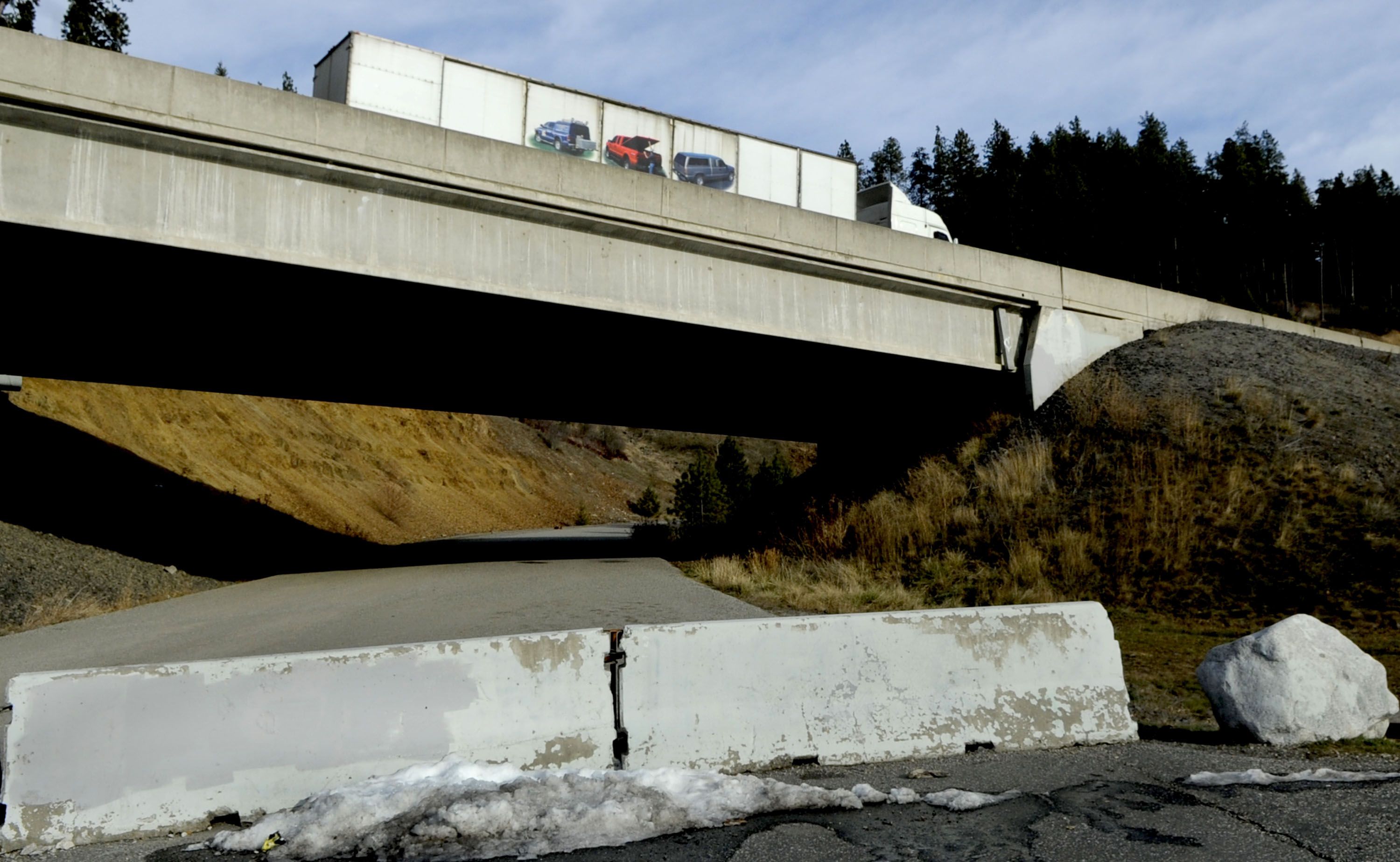 The underpass at Higgens Point, seen Thursday, is part of the proposed route of a megaload shipment to Great Falls. (SR Photo: Kathy Plonka)

Higgens Point is both an environmental treasure for the area and the site of an infamous environmental failure for the state Transportation Department. In the early 1990s, ITD was attempting to build an interchange there when a huge landslide sent two pieces of heavy earth-moving equipment and tons of gravel into the lake, right where kokanee spawn. As part of its penalties and to mitigate the damage, ITD expanded spawning beds all along the area and built the popular Centennial Trail.

Plus, federal authorities nixed the interchange, to connect the former freeway at Coeur d’Alene Lake Drive with the new one on the far side of the then-new high bridge. The site is now a popular recreation and wildlife viewing area with no through traffic.

The partly completed remains of that interchange will serve as the temporary on-ramp.

“We have concerns about the kokanee spawning out there by Higgens Point,” said Mary Terra-Berns, environmental staff biologist with the Idaho Department of Fish and Game. “We want to make sure there’s no sloughing” of sediment,” she said. “The fish are just getting done with their spawning.”

Lou Teyler, who lives on Potlatch Hill Road nearby, said she’s concerned about the integrity of the roads and access in the area. “I think it’s always a concern when you have something as massive as this,” she said. But she was impressed by Mammoet’s plans. “They’ve got it pretty well planned out,” she said. “I’m leaving feeling better than I came in.”

ITD spokesman Adam Rush said the agency scheduled the public meeting because of the freeway closures, which will be limited to 10 minutes each and will occur around 3 a.m. as the loads pass through overnight.

Coeur d’Alene Tribe representative Helo Hancock said he was surprised the tribe wasn’t consulted earlier about the haul. “We’ve just found out about it,” he said. ITD officials said they plan to meet with the tribe next week.