Spokane police shot and killed a man at the scene of a suspicious death in north Spokane this afternoon. Police were called to a report of a dead woman found in a home at 2512 N. Standard St. Investigators were on the scene and were getting a search warrant for the home, police said. Around 1:50 p.m. gunfire rang out and a man began yelling that police had shot someone who arrived at the home. Spokane Police Chief Frank Straub said a man who was a “person of interest” in the suspicious death broke through a police barricade to drive to the house. Police had been searching for the man, Straub said. They found a firearm near the body, he said. Henry Sasser, who lives nearby, was standing about 20 to 30 feet away when the man was shot. Sasser said a truck drove up to the house and stopped. A white man with a beard and mustache got out of the truck holding a gray object down around his waist. Sasser said he assumed the object was a gun but didn’t see it clearly. Police told the man to stop, then Sasser said he heard eight gunshots. Reporters and photographers were gathered nearby when the shooting occurred. Police had earlier announced they were at that location investigating the possible homicide. Police said public information officer Monique Cotton won’t be providing updates on the officer-involved shooting, as it typically the case, because she was a witness to the shooting. The scene is on the border of a residential and industrial area and is near Logan Elementary School. The home where the dead woman was found is a single-story gray structure with a “dog on property sign,” a chain link fence and a black Jeep in the driveway. The Spokane Investigative Regional Response team is on scene. This Google Street View image shows the home where the initial homicide investigation was taking place. 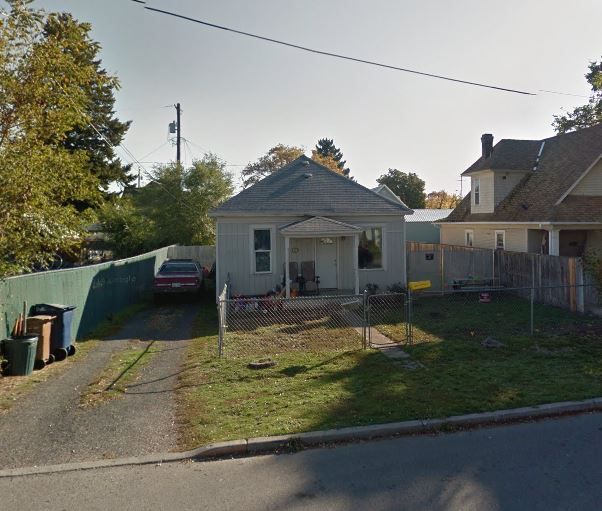