OLYMPIA – Washington is seeing a “green rush” of sorts in marijuana, with far more people wanting to grow and sell the drug legally than the state will allow.

State agencies will approve no more than 334 licenses for retail marijuana stores and already have more than 2,000 applicants. Would-be pot entrepreneurs also have proposed planting many times more land than the state will allow for its newest cash crop.

Those numbers will increase, because even though the state stopped taking marijuana license applications on Dec. 20, some have yet to be processed.

The Washington Liquor Control Board this week released the names and addresses of some 6,600 businesses applying for special licenses to produce, process or sell recreational marijuana under the law voters passed in November 2012.

King County has 719 applications; the state will approve 61, with about a third in the city of Seattle and the rest spread around the other cities and suburbs.

After all applications are examined to make sure they comply with rules for obtaining any required local permits, zoning rules and distance limits – marijuana businesses must be at least 1,000 feet from schools, parks, playgrounds or other areas mainly for children – the board will hold a lottery in each county and city with more applications than the number allocated.

The state could also have requests to plant 20 times more area to marijuana than the board will initially allow.

The Liquor Control Board set a limit last year of 2 million square feet of land to be planted to marijuana in an effort to supply the first stores. Growers can request one of three levels based on the area they expect to plant: up to 2,000 square feet; from 2,000 to 10,000 square feet; and from 10,000 to 30,000 square feet.

Applicants are required to estimate how much land they intend to plant with marijuana – an area known as the canopy – and can list less than the maximum. But if all applicants planted to the maximum space for the applications listed thus far, the state could have more than 42 million square feet producing marijuana this year.

Spokane County alone has 228 applications to grow marijuana. If all were granted and planted to the highest requested amount, it would total more than 3.8 million square feet – almost twice the amount of land allotted for the entire state.

As with the retail applications, the Liquor Board must review all producer applications to determine the actual number each one plans to grow, board spokesman Mikhail Carpenter said. No company can have more than three producer licenses, and some company names and business license numbers suggest some applicants may be over that limit.

The board can restrict the amount of area licensees can plant to keep the total to 2 million square feet, Carpenter said.

The state Department of Revenue and the Liquor Board are still processing some applications, Carpenter said. Grower licenses will be awarded first, in late February or early March. Retail stores are expected to open in late spring or early summer. 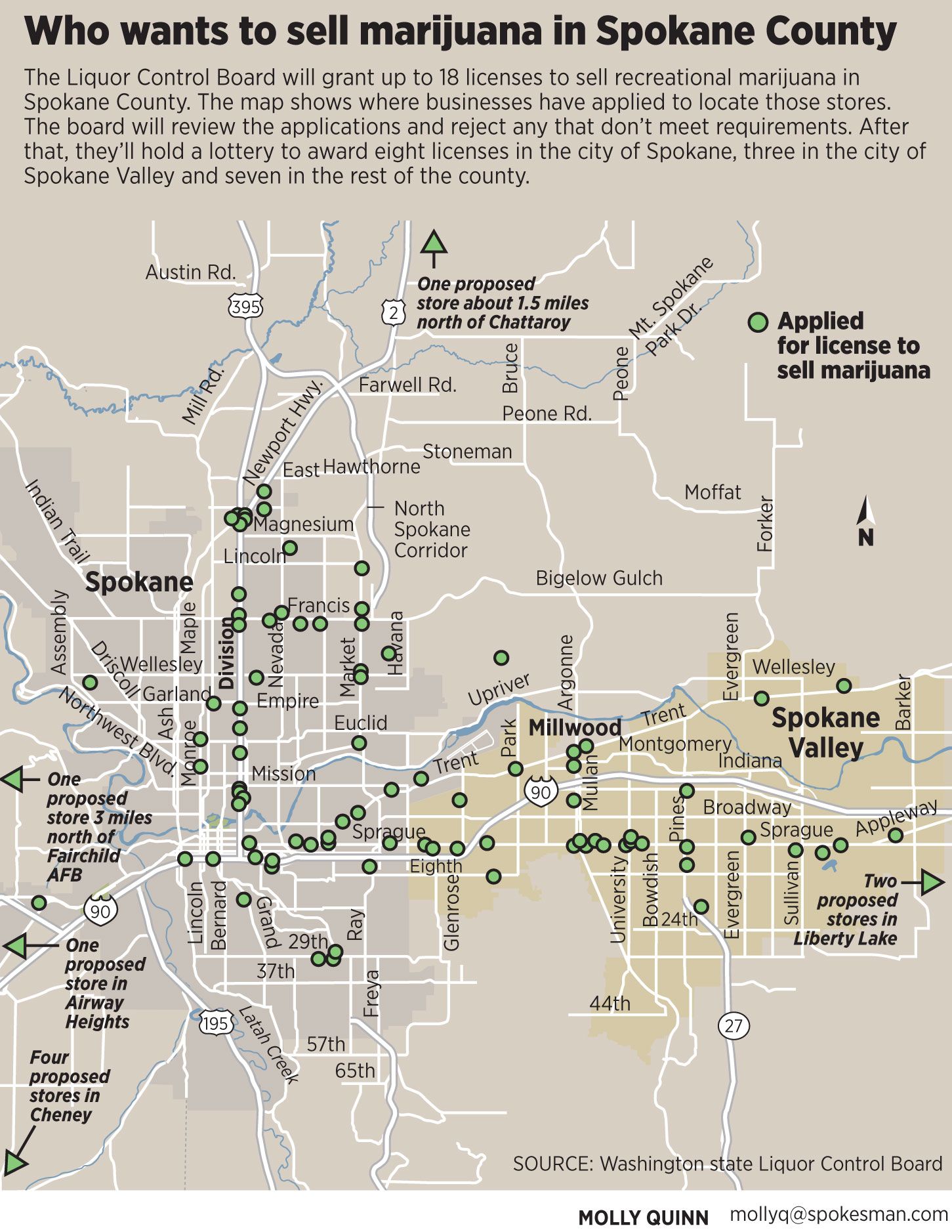