SPRINGDALE, Wash. – From the cluttered back stoop of Raqeebah Amatallah’s one-story farmhouse in rural Stevens County, it’s hard to see how the snow-covered wooden structure about 50 yards away could prompt years of legal battles.

Inside, there’s evidence of human occupation: a wood stove with charred kindling, a hot plate with stains from countless cooked meals, and some empty coffee cans. But no one has been there for weeks, Amatallah said.

The Town Council of Springdale, Wash., thinks the two-story building is a shed not suitable for living. Amatallah’s late husband, Dawud Ahmad, and two of his impoverished pupils who moved into the structure in 2010 fought back, saying they have a right to ask for an exemption of building codes under the Islamic pillar of charity.

So far, the courts have sided with the town. But a new appeal under federal law could change that.

Amatallah said the structure was originally meant to serve as an office for her husband, an Islamic convert and self-proclaimed sheik who corresponded with adherents in the region and around the globe through the Internet. The couple moved to Springdale in 1993.

“We both loved it. It’s a cute little place,” said Amatallah, dressed in a traditional hijab and sipping tea surrounded by her late husband’s books. She received word in December that her husband’s organization, Muslim America, and one of his pupils, co-defendant Bedreddin Iman, owed Springdale $23,000 in legal fees as a result of the latest appellate court opinion.

“I don’t know if that’s chump change for people nowadays, but it’s not for us,” said Amatallah, who still lives on the property with her son, Hakeem Dawud. 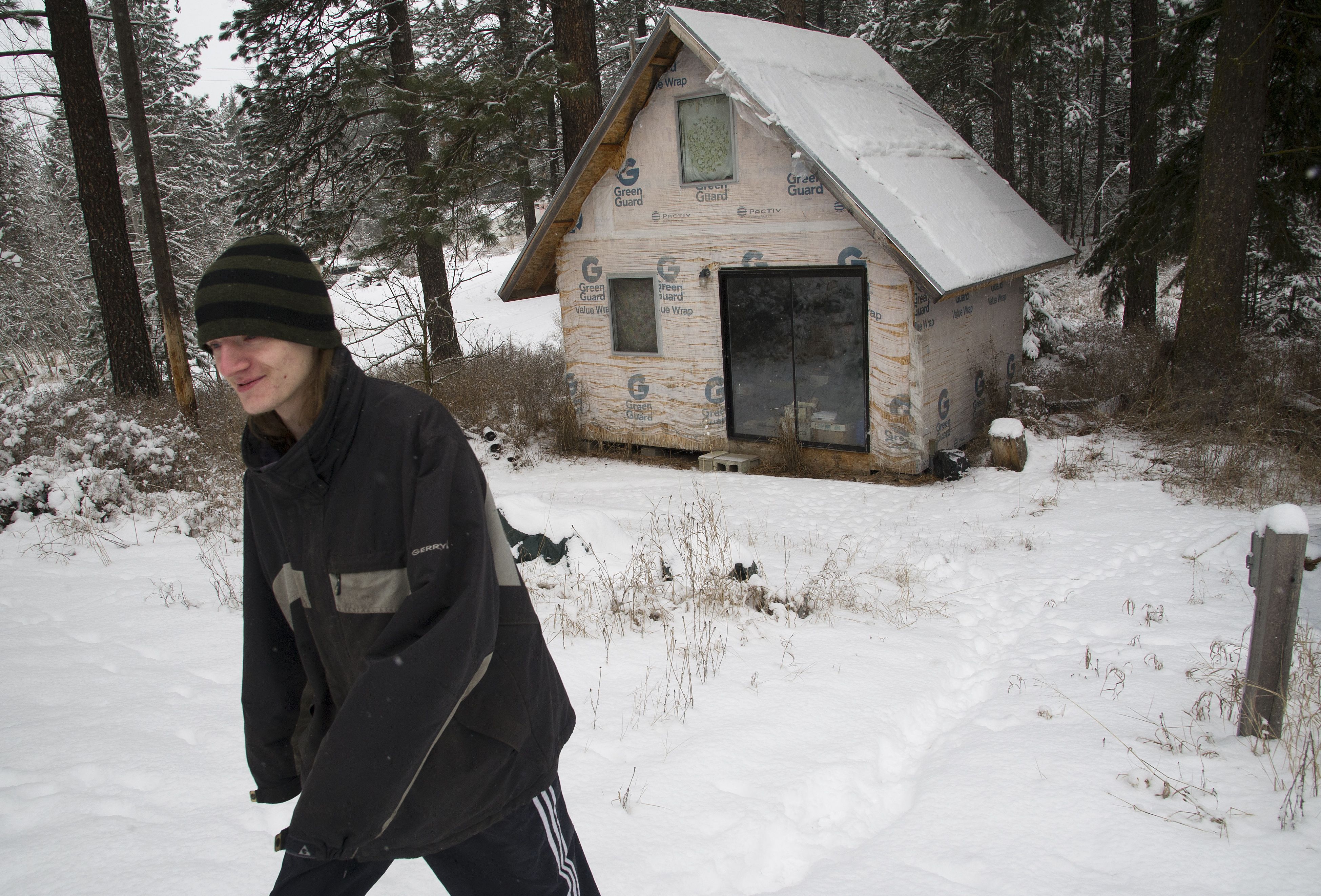 (Hakeem Dawud walks back to his Springdale home last month from the two-story wooden structure that has prompted years of legal wrangling for his late father, his family and the community. SR Photo: Colin Mulvany)

Her husband was fascinated with the law, she said, and initiated action when the town moved to roust his pupils from the cottage – or shed, depending on whom you ask.

With Ahmad’s death in 2012 from liver and lung cancer, Spokane attorney and friend Jeffry Finer has taken up the case. Last week marked the deadline to appeal the most recent ruling, and Finer used a 14-year-old federal law designed to protect religious groups from stringent zoning codes.

“I am actively seeking … religious advocacy organizations that might be sensitive to what I perceive as a massive injustice” to file supporting statements in the case, Finer said.

Finer and the remaining members of Muslim America will have to prove the alleged discrimination against religious freedom fits into case law that has formed since the passage of the Religious Land Use and Institutionalized Persons Act in 2000. If the history of the case is any indication, it will be a tough, time-consuming and costly argument to make.

Bedreddin Iman was an out-of-work substitute teacher with $400 to his name when he moved into the cottage on Amatallah and Ahmad’s property. Their home is a few blocks north of where a handful of businesses comprise the downtown center of Springdale, population 280.

Some of Iman’s belongings were already being stored on Ahmad’s property in fall 2009 while he taught in Seattle. He’d moved from Wisconsin a few years earlier to study under Ahmad after reading the Springdale man’s teachings online.

“My shaikh … Dawud Ahmad al-Amriki, is the most prolific writer about Islam I have ever known,” Iman said in a recent email. He has returned to Wisconsin to care for family members.

Amatallah said her husband spent long days at the keyboard, composing religious tracts – still online at the Muslim America website – and, later, court briefs. He alleged that Springdale was infringing upon religious freedoms by ordering his pupils, Iman and Sameer Hatem, out of the building because it wasn’t up to code.

“He referred to himself as a ‘wordsmith,’ ” Amatallah said of her husband (pictured, left).

Ahmad put those skills to work shortly after the town marshal told Iman to leave. He took pre-emptive action, filing a writ against the city demanding it pass an ordinance loosening its zoning regulations for the structure because it was being used to house poor adherents of his faith.

Under federal law, property is protected from onerous zoning codes for “religious exercise.” Ahmad argued that because charity is one of Islam’s five pillars, the property should be included under that umbrella.

“The plaintiffs here have an absolute right to use the property for a religious purpose,” Ahmad told a Spokane County judge in June 2010. The case was heard in Spokane County because judges in Colville knew Ahmad too well, Amatallah said.

Members of the Town Council countered they were under no obligation to exempt Ahmad’s organization, Muslim America, from building codes. Then-Mayor Doug Buche added that charitable assistance was readily available from organizations using facilities that met town standards.

“At this time, I don’t feel the town needs an ordinance,” Buche said before the council voted not to adopt an exemption for the group, about a month after Ahmad’s original writ was filed in February 2010. Judge Maryann Moreno threw out Ahmad’s lawsuit, saying the state law he cited gave municipalities the option to grant exemptions, not a mandate.

It is this distinction that Amatallah, Iman, Finer and others hope will help Muslim America win the day under a different federal law, as well as avoid the legal fees the court ordered the group to pay for filing a frivolous lawsuit.

Religious exemption based on zoning

America’s lawmakers agreed overwhelmingly in 2000 to a bill endorsed by the Justice Department and more than 75 civil rights organizations designed to protect the housing rights of religious groups.

“This discrimination against religious uses is a nationwide problem,” said Sen. Orrin Hatch, R-Utah, moments before the Senate unanimously passed the Religious Land Use and Institutionalized Persons Act.

In part, the law reads, “no government shall impose or implement a land use regulation in a manner that imposes a substantial burden on the religious exercise of a person,” unless lawmakers can prove a compelling interest to do so and the imposed burden isn’t overly restrictive.

Heather Weaver, a senior staff attorney with the American Civil Liberties Union’s program on freedom and belief, said there are multiple thresholds someone filing a grievance under the law needs to meet. A religious group must prove it has exhausted all other remedies; that the government’s action is overly restrictive; and, perhaps most relevant to Muslim America’s case, that the ordinance in question must be about land use, which the courts have held means zoning codes.

“The courts have looked at all types of regulations, and on many occasions have said, ‘No, that doesn’t qualify,’ ” Weaver said, citing fire codes and Americans with Disabilities Act regulations as possible exceptions.

The original complaint sent to Muslim America, signed by town Marshal Paul Murray in April 2010, cites the violation of the town’s building codes, specifically the lack of an occupancy permit for the shed. The citation warned that fines and legal action could be taken if the occupants didn’t leave.

Ahmad contended he applied for and received permission to house people in the shed shortly before Iman began sleeping there in October 2009.

Amatallah said when the marshal came to the cottage, Iman complied and stepped outside. When the marshal left, the pupil was unsure what to do, she said.

“He said, ‘Well, what should I do now?’ ” Amatallah remembered Iman saying. “I told him to just go back.”

Springdale has not moved to condemn or tear down the structure. Finer said doing so would provide Amatallah and Muslim America more legal options, but for the time being the structure stands unoccupied. Iman left for his hometown in Wisconsin several months ago, Amatallah said.

While the most recent appeal questions whether the exemption should have been granted, the protracted fight has been over who will pay for the legal action taken so far. The ruling that the initial lawsuit was frivolous landed Amatallah and Iman with the bill after Ahmad’s death. But in its most recent ruling, Finer said, the court ignored his arguments under the federal religious land use act, leaving the window open for further appeal.

A wife’s one regret

Amatallah and Ahmad raised their seven children in Springdale without a hint of unease about their adopted faith, she said. They moved to the quiet town to avoid the bustle of cities. The couple met in Cleveland.

“People will see what the Muslims are doing, but it’s not necessarily Islam that they’re seeing,” Amatallah said. Neighbors brought her family a spaghetti dinner after Ahmad’s death in 2012, and friends take her on shopping trips. She works at a downtown pizza restaurant, Hotza Motza, owned by friend and current Town Council member Sue Cox.

Cox wondered aloud if the whole issue might have been avoided by a breezeway connecting the family’s single-story home with the shed about 50 yards away.

“(The lawsuit) cost a fortune, and now it puts Raqeebah in the position of losing her house,” Cox said.

Though Amatallah said the town is in much better shape to pay should an appeal prove successful, Springdale has had its share of legal and economic woes. The town has been audited four times by the state since 2006. The most recent evaluation produced three citations: failing to make timely payments of federal loans to improve sewer infrastructure, failing to keep adequate financial records, and spending significantly greater amounts of money than revenues.

“The Town is at risk of not being able to meet its operating expenses and debt obligations,” the state auditor’s office wrote in a report in September 2012. Springdale officials argued the findings were out of their control, but that they were working to correct the issues.

Buche, the former mayor, declined discussion on the matter, referring questions to the current administration. Other current and past members of the town council did not return calls seeking comment. The attorneys for the town, John Riley and Nathan Smith, also did not respond to requests for comment.

The money doesn’t worry Amatallah, she said, even though a failed appeal could mean the seizure of her home, where she and her youngest son remain. Her other children live in areas as far-flung as Hawaii, which would be a nice outpost for the group, she said with a laugh.

Her one regret, she said, was that her husband spent his final years – some of which he was in considerable pain – writing about a legal case he never saw concluded to his satisfaction.

“I don’t really associate the case with him so much,” Amatallah said. “The case is a case. It’s a pain, you know? Yeah, I felt angry that he spent his last years on this. I don’t really still feel angry about it.”