Cache Reset
Admin Edit Exit Admin
Log in Subscribe
Activate
My account Log out
Go to e-Edition Sign up for newsletters Customer service
Subscribe now
SEATTLE – Myles Gaskin rushed for 138 yards and two touchdowns, Sidney Jones, Darren Gardenhire and Azeem Victor all returned turnovers for touchdowns in the second half and Washington became bowl eligible with a 45-10 win over No. 20 Washington State on Friday. The Huskies (6-6, 4-5 Pac-12) removed any doubt about their postseason status by stemming the best passing game in the country and taking advantage of seven turnovers by the Cougars, the most by Washington State since 2009 against Hawaii. Peyton Bender made his first college start for Washington State because of an injury to Luke Falk and looked the part of an inexperienced freshman. Bender threw for 288 yards, but the Cougars (8-4, 6-3) failed to take advantage of three good scoring opportunities in the first half. Bender started after Falk suffered an apparent concussion last week against Colorado. Jones returned an interception 69 yards for a touchdown in the third quarter and Gardenhire scooped up a fumble and returned it 28 yards for a touchdown in the fourth quarter after Washington State standout wide receiver Gabe Marks was bent awkwardly and appeared to suffer a right knee injury. On the next play from scrimmage after Gardenhire’s TD, Victor nabbed Bender’s pass and returned it 27 yards for another score. The Cougars will still be going to a bowl game for the second time under coach Mike Leach but lost out on a chance at just the sixth 10-win season in school history and may tumble down the Pac-12 pecking order. The Cougars were held more than 100 yards passing below their season average, although the absence of Falk was a significant reason why. Gaskin was also a big reason why the Huskies pulled away. Held to 29 yards rushing in the first half, Gaskin ran for 67 yards in the third quarter alone and plowed in for a 5-yard TD on the first play of the fourth quarter and a 31-10 Washington lead. Even with a bowl game remaining Gaskin posted just the 18th 1,000-yard season in school history and most ever by a freshman with 1,111. Washington quarterback Jake Browning was 14 of 20 for 203 yards. His interception in the third quarter set up Washington State’s only touchdown, but was the only mistake Browning made. Meanwhile, the Cougars couldn’t stop making mistakes on a day they needed to be close to perfect with Bender running the show. Bender started well hitting 6 of 7 passes on the Cougars opening drive, but Washington State’s missed opportunities started immediately. Dom Williams dropped a potential touchdown on a screen pass on third down and the Cougars settled for a field goal on its opening possession. Erik Powell missed wide left from 42 yards on Washington State’s next series and two fumbles inside Washington territory cost the Cougars chances at points later in the half. It was just the second time this season Washington State did not score a touchdown in the first half. The only other time was against Stanford in a game the Cougars led 12-3 at the break. Washington State finally got into the end zone with 4:14 left in the third quarter after Marcellus Pippins interception led to Bender’s 1-yard TD pass to Williams. 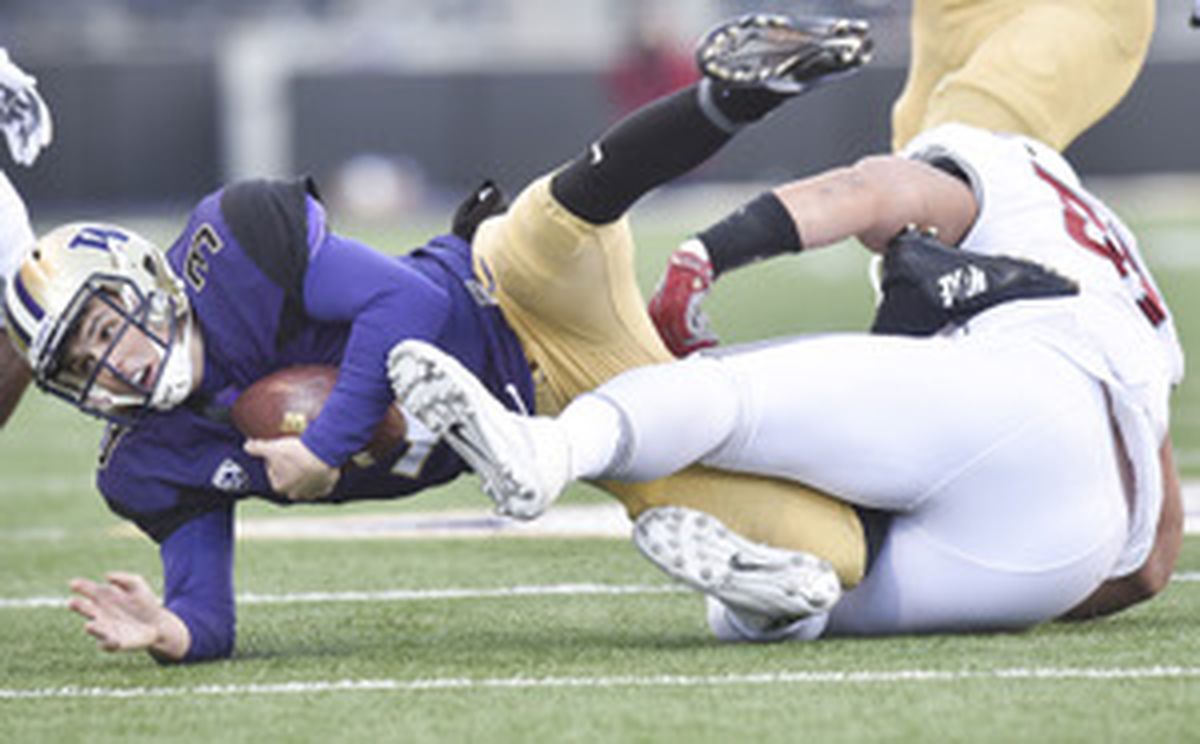 Lead photo credit: Washington State quarterback Peyton Bender, right, is sacked by Washington's Cory Littleton during the first half of the Apple Cup on Friday in Seattle. (Tyler Tjomsland / The Spokesman-Review)