A GRIP ON SPORTS • Ever feel like an iguana surrounded by a bunch of snakes? Ya, me too. Almost every day. But I never seem to escape. Not like yesterday’s video-star lizard. And not like the Seahawks on Monday Night Football. Read on.

• If you were anywhere near a computer, tablet or phone yesterday I’m pretty sure you saw the BBC clip of the superstar lizard pulling a Houdini act on a beach in a tropical “paradise.” It was the best drama available Monday.

Until the Seahawks game.

And then you got drama. With a capital “D.” Everything was included.

Some incredible offense – we see you Jimmy Graham; now we get it.

Some clutch defense – tackling wasn’t the Hawks’ forte until the last drive.

And some questionable officiating – yes, Richard Sherman blew up the Bills’ kicker at the end of the first half and, yes, the call was missed; so were three holds on the Bills on the final drive, any of which would have sealed the game earlier.

In other words, an old-time Monday Night Football game in Seattle.

You almost expected Dennis Miller to make a sarcastic remark or Tony Kornheiser to complain about his trip west. That’s how throwback this game was. The Hawks played as if they had a healthy quarterback, the defense played as if it was missing two of its key contributors and the crowd yelled as if the Mariners were in the World Series.

And Graham? He was a one-handed wonder. The type of target many of the “we-traded-our-best-offensive-lineman-for-him?” crowd never expected him to be. Except today, of course, when they tell their buds at work how they knew he was going to be like this all the time.

And maybe Graham will, if Russell Wilson can continue to get healthy. He’s still not the Russell Wilson of a year ago, in a mobility sense. But he is better and can be that guy he was when it comes to throwing the ball. How does 20 of 26 for 286 sound? Good enough. But the rushing game was nonexistent. And that’s only about 10 yards from being a literal statement.

And the defense is a concern as well. The group tackled early about as well as the snakes, not wrapping up, not finishing plays. It cost the Hawks as much as Michael Bennett and Kam Chancellor’s absence did.

But the bottom line people will have to be heard. And they will be loudly trumpeting 5-2-1. That’s the Hawks’ record after the 31-25 victory. Good. Not great. And way too drama filled.

• If you are ticked Sherman wasn’t called for a unnecessary roughness penalty near the end of the first half, you might be qualified to be the NFL’s head of officiating. At least you have that in common with Dean Blandino.

He saw it as a foul. Referee Walt Anderson didn’t. He should have. And it might have changed the game.

But don’t get all worked up in a lather if you see a picture of Sherman blowing up a receiver 12 yards downfield on the game’s final play. That, my friends, was not a foul, even if a guy who works for NBC went on Twitter to rail about how it was just another example of the Hawks getting every call.

The rule is simple. If a receiver is more than 5 yards downfield, the defender can’t make contact with him. That’s illegal. Unless the quarterback has left the pocket. Then defensive backs can go all Lester Hayes and be physical, though knocking down a receiver who is on the opposite side of the field is an extreme example.

What Sherman did is within the rules and taught throughout the league.

He just does it at a higher level than most.

• WSU: Mike Leach isn’t a fan of a lot of things. The Cleveland Indians, to name one. He also isn’t a fan of the Pac-12’s nine-game conference schedule. Jacob Thorpe has Leach’s thoughts on that. He also has Leach’s thoughts on his in-game discussion with Gabe Marks concerning slot receivers, all-time, and the suggestion to the NCAA to limit off-campus participation. Plus, Jacob has his first look at California and Gabs Marks' feelings about Dad's Weekend. … The Cougars are in the championship race. Now they want to take it. … The Times is staying up on the Robert Barber case. … Cal didn’t play all that well against Washington last week, but the Huskies can make you look bad this year. 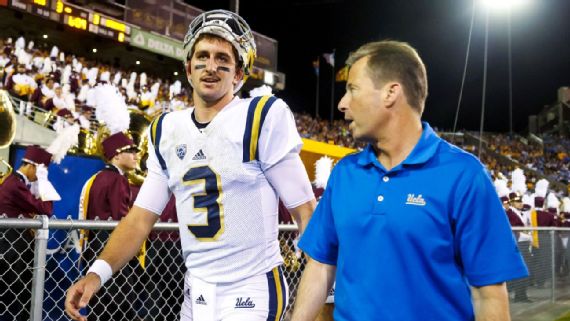 Elsewhere in the Pac-12, USC’s visit to Seattle is getting a lot of attention nationally – it is USC after all – but all Washington wants to do is keep winning – and stay healthy. … Will Phil Knight really pony up $10 million – or more, if you consider Mark Helfrich’s buyout – to get Oregon a new coach? Does it matter to Stanford? … UCLA quarterback Josh Rosen went under the knife yesterday. Oregon State will try to cut up the Bruin defense Saturday. … Arizona is beat up, battered and bruised. Colorado is playing for all the marbles. … The conference schedule begins Thursday again, with Arizona State hosting Utah.

• EWU: The soccer team learned its NCAA fate yesterday and, as Jim Allen writes, it is USC in Los Angeles. … Around the Big Sky in football, the conference's offensive player of the week may not start for Montana this week. … North Dakota sees a great chance to win the Big Sky title. … The game with BYU means a lot for Southern Utah.

• Whitworth: The volleyball team will open the NCAA Division III postseason in Dallas.

• Preps: The Washington soccer playoffs continue though none of the area's larger schools are still playing.

• Seahawks: Yes, the Hawks’ won. But the victory over the Bills just revealed all of Seattle warts. It makes John Blanchette wonder when we will see the real Seahawks. Or are we seeing them? … The defense needs to get healthy. The offense was better.

• It is election day. Or Election Day if you prefer. When I was 16, with my newly minted driver’s license, I canvassed and drove people to the polls for, ahem, Richard Nixon in 1972. He won in a landslide, if you remember. It amazed me then, and still does today, how many people told me when I came to the their door they weren’t voting because it was a rout. As if there weren’t other races on the ballot. I was 16, couldn’t vote and wanted to shake these people. What dopes. No matter how you feel about the presidential race today, don’t forget there are many other decisions that need to be made, decisions that probably affect your day-to-day life more than the presidential race. So vote. You never know, you might just cancel mine out. Until later …