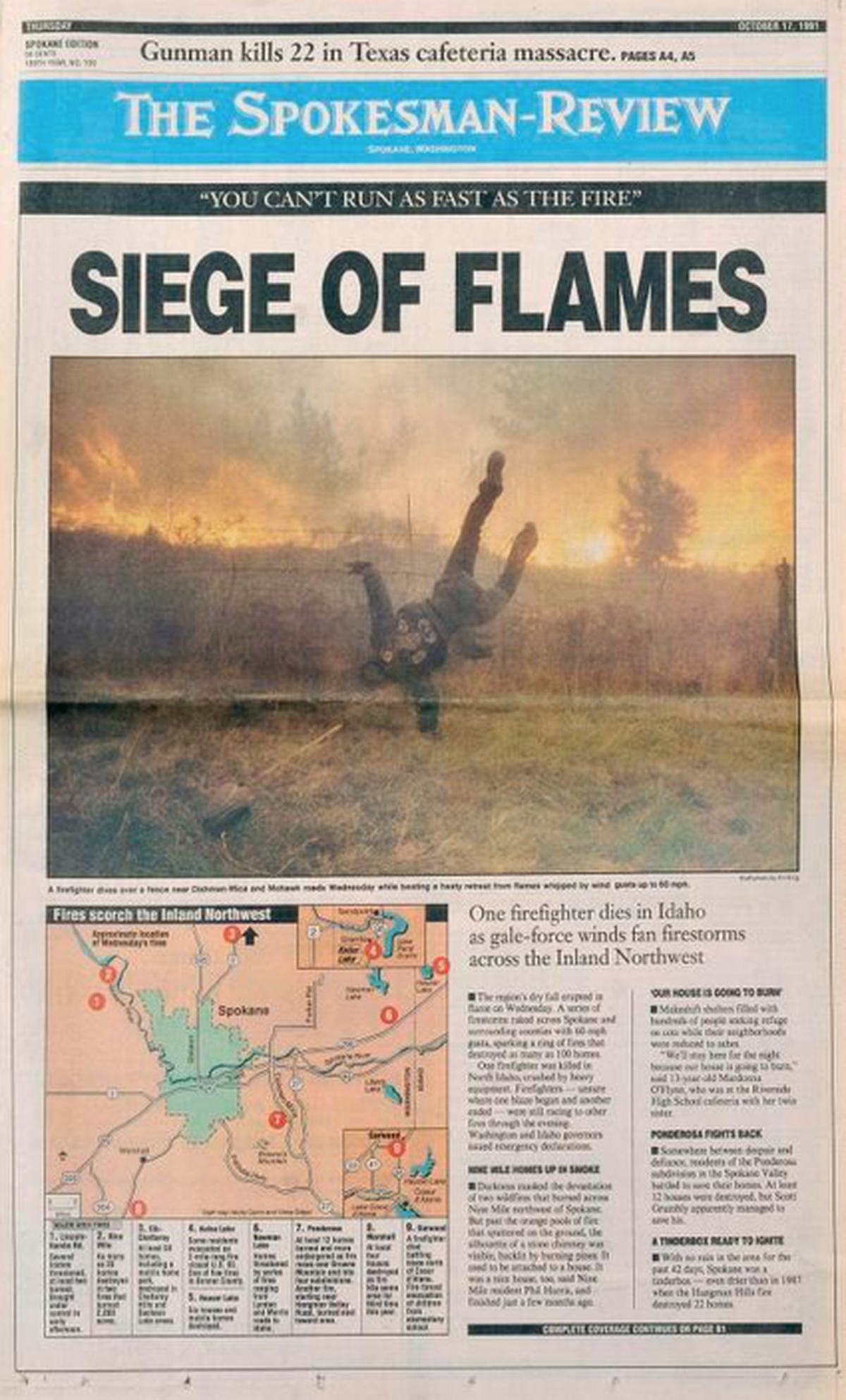 From Spokesman Review Archives and the Department of Natural Resources

The pine needles were two inches thick. That was all 12-year-old Kevin O’Connell focused on while walking to school one windy day 25 years ago.

“Man, I’m going to have to go home and do all this work,” he remembers thinking.

Things didn’t turn out that way.

Instead, O’Connell came home to his house ablaze, the surrounding hills covered in smoke and his father fleeing an exploding shed.

“October 16 was a weird day and kind of changed my life a little bit,” O’Connell said Friday, standing in front of his rebuilt Ponderosa neighborhood childhood home. “You kind of realize that material things aren’t the most important things in the world.”

“The shed next to the house, it just exploded,” O’Connell said. “It was like in a war zone.”

Sunday was the 25th anniversary of the firestorm and, for O’Connell at least, the event is still etched into his memory.

“When you lose your home, you feel kind of unsafe,” he said. “I’m still kind of paranoid when forest fires happen and I smell that smoke.”

The firestorm affected more than just individuals. It helped change how fire awareness and prevention has been taught in the Spokane area, said Guy Gifford, spokesman for the state Department of Natural Resources’ northeast region.

On Sunday, Gifford presented a Fire Wise award to the small community of Four Mound, northwest of Spokane. In addition to the award, local landowners and homeowners brought brush and trees they’d cleared to be chipped.

Four Mound was in the center of the Ninemile fire, a 13,840-acre conflagration that destroyed 31 homes. Gifford, who fought the 1991 fires, said in the 25 years since, there has been an increased focus on wildland fire education, especially creating defensible space. Fire Wise, a national fire prevention education program, recognizes communities for creating defensible space around buildings and keeping forests thinned.

“That (firestorm) was before we had this education,” Gifford said.

Bonnie Cobb owns 190 acres near Four Mound. In 1991, she lost about 20 acres of timber and three outbuildings. She was lucky.

Since then, Cobb has become more aware of managing her land, she said. Every year, with the help of the DNR, she thins timber and clears brush.

Education has made a difference, Gifford said. He points to recent forest fires that didn’t grow because landowners had managed their forests correctly.

Still, as one volunteer firefighter pointed out Sunday, prevention only goes so far.

“All it takes is one mistake,” said Josh Saiz. “There is some luck involved. Even if we’re on the ball.”

As O’Connell’s family home burned, less than a mile away 19-year-old Scott Grumbly was standing on the roof of his parents’ cedar-shingled home trying to save it from the approaching fire, while simultaneously avoiding arrest.

“People are wired differently,” Grumbly said Friday. “Some people pack up and leave. Other people stand and fight, and you don’t know until it actually happens at that time.”

Grumbly and his father, James, were fighters. The flames came within 50 feet of their home, but they didn’t budge, even when police officers handcuffed James Grumbly.

“We saved everybody’s but one house,” Grumbly says with pride 25 years later. “My dad and I actually ended up getting some letters from the insurance companies thanking us for saving the homes.”

A big reason they were able to save the home, Grumbly said, is that they’d just raked up all the pine needles and they had a “really green lawn.” Grumbly now lives in in Spangle, and his home is encircled by gravel. Grumbly was a volunteer firefighter for five years following the firestorm.

On Friday, O’Connell stood in front of his rebuilt family home. It was a windy day, and pine needles coated the driveway.

“I remember when windstorm happened last year, that reminded me a lot of Firestorm,” he said, pausing and looking around. “This feels how it was that day.”