A GRIP ON SPORTS • Some mornings it is hard to concentrate on sports, even if the day holds the promise of great things ahead. Today is one of those mornings. Read on.

• Awoke this morning to texts from my sister. Seems she is without power, due to the Thomas Fire, which is burning just north of her in Ventura, California. That’s the hometown of my oldest friend. Seems he is OK as well, though he’s packed and ready to evacuate.

He and his neighbors are out of harm’s way for now as the fire burns home after home to the ground throughout the town of 100,000. The pictures of the streets with nothing but chimneys left are devastating.

• There is no easy way to segue into sports, so we’ll just get right into the news.

Gonzaga is in New York City today for a tough non-conference battle with No. 4 Villanova. The Zags moved up in the polls this week after their win over Creighton, but now face another somewhat-neutral-court test with one of the nation’s better programs.

One of the interesting developments in this still-young college basketball season is the Pac-12’s struggles. The two teams expected to carry the conference’s banner, Arizona and USC, were the two teams mentioned in the FBI probe. And then they began the season with losses to what was perceived to be inferior foes. UCLA is always good but was also roiled by an off-court incident, and now the Ball era in Westwood seems to be over.

The best team in the conference right now is undefeated Arizona State, which has been boat-racing teams. The Sun Devils are 7-0 and ranked 16th. The only other Pac-12 team ranked is USC, with UCLA and Washington State also receiving votes in the AP poll.

• Luke Falk had finished behind Baker Mayfield each of the past two years in voting for the Burlsworth Trophy, given to the best player who began his college career as a walk-on.

And both were in the running again this season, one in which Mayfield will finish as the Heisman Trophy recipient. So the Oklahoma quarterback was a shoo-in to win his third Burlsworth, right?

To quote Lee Corso, not so fast my friend.

Falk was the surprise winner yesterday as the award was announced in Fayetteville, Arkansas.

If you read up on the trophy and its namesake player, Brandon Burlsworth, it becomes obvious that there is a character component in play here. So it wouldn’t be much of a stretch to believe Mayfield’s on-field antics during a win at Kansas earlier this year, which included a crotch grab and quite a bit of cursing, not only cost him the start against West Virginia the next week, but his third Burlsworth as well.

WSU: Theo Lawson has a story on Falk’s award as well as the quarterback and offensive lineman Cole Madison accepting Senior Bowl invitations. … Theo is an AP basketball poll voter and, no, he isn’t the guy who moved WSU up in the rankings after the UC Davis loss. … The women’s basketball team had little trouble with St. Louis last night in Pullman. … The Times’ Stefanie Loh takes a look at Michigan State as well as keeping up with the two news items. … Hercules Mata’afa is a finalist for an award. 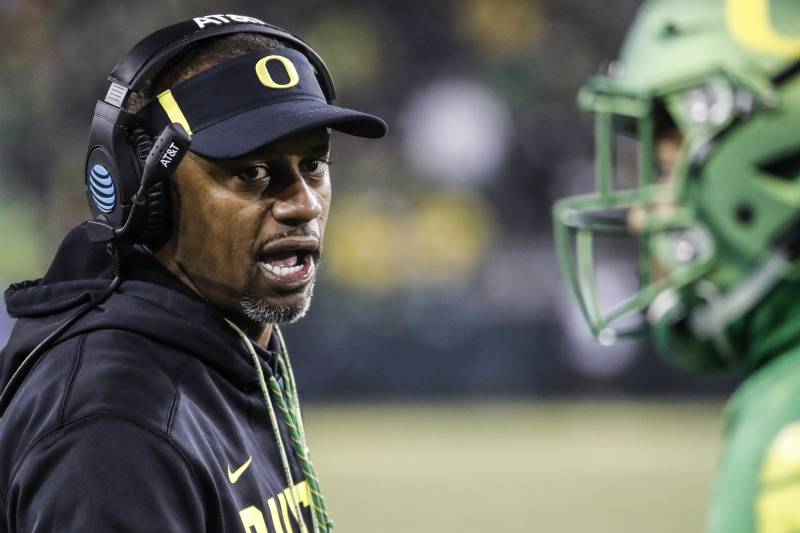 Elsewhere in the Pac-12, we have another power ranking in an up-and-down year for the conference. … Is Willie Taggart leaving Oregon for Florida State or not? Duck fans just want an answer. And Oregon will want some money. … Washington matches up with Penn State in the Fiesta Bowl. … Oregon State has hired an assistant coach with Idaho ties. … Alex Grinch won’t be Chip Kelly’s defensive coordinator at UCLA. That’s good news for WSU fans. … Arizona State’s bold experiment with Herm Edwards is interesting, that’s for sure. … Is it time for eight teams in the playoffs? … In basketball news, LiAngelo Ball’s departure from UCLA is good news for the Bruins in a lot of ways. … Utah has a game at Butler and Arizona faces highly ranked Texas A&M. … Washington has won four consecutive games.

Gonzaga: Not only is Villanova a great team, the Wildcats also feature a great player. Jim Meehan covers both, with a preview of tonight’s matchup and a piece on Jalen Brunson. … He also has the news Zach Norvell was the WCC player of the week and the poll situation. … Around the WCC, Saint Mary’s picked up an easy win over Sacramento State. … USF also won at home versus Central Arkansas. … BYU has been winning on the road.

Seahawks: The physics behind Russell Wilson’s lateral against the Eagles brought a few laughs to Pete Carroll’s press conference yesterday. … Sheldon Richardson has been a real help this year. … Carroll is optimistic Chris Carson will be back this season. But when isn’t Carroll optimistic? … There is other injury news as well.

Mariners: As the M’s fill out their coaching staff, the Shohei Otani sweepstakes nears its end.

• We will be back after the Gonzaga basketball game tonight with our TV Take. ESPN’s “A Team” of Dan Shulman, Jay Bilas and Holly Rowe will be on the call, which means it should be a lot of fun. Until later …