A GRIP ON SPORTS • This will not come as a surprise to anyone in the Inland Northwest who has left their house in the past 48 hours, but it’s really cold outside. I mean, tongue-stick-to-the-flagpole-from-3-feet-away cold. But it was warm in the gym last night, whatever gym you may have been in. Read on.

• Maybe that’s why we produce such good shooters around here. There is little else to do on days like these than get in a gym and shoot. 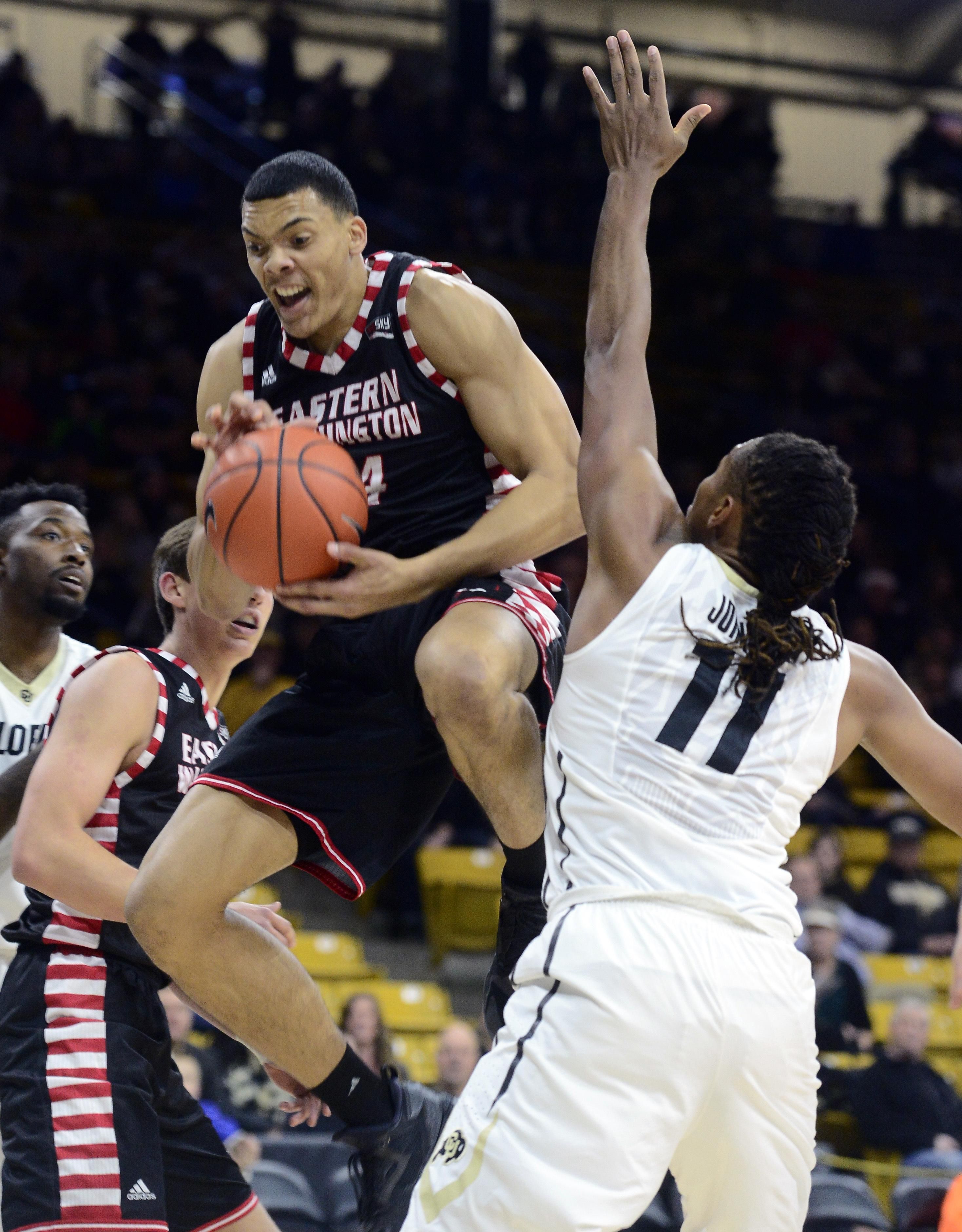 Heck, it may be too cold right now to even snowboard or snowshoe or take a cross-country trek. I wouldn’t know for sure. I’ve never done those activities. But I have spent a lot of time in gyms watching basketball and its preferable to most things when the temperature dips into the single digits and below.

Which brings us to some of the basketball performances last night.

Out in Cheney, Jake Wiley, a kid used to the cold, took 15 shots for the Eagles. He made 10 – for 25 points – in leading Eastern to an 82-64 Big Sky Conference win over Montana State. That’s good, but not as good as the 7 of 9 teammate Felix Von Hofe made en route to 19 points.

For Wiley, cold winters are nothing new. He played his high school ball in Newport – after moving north from Southern California before his sophomore year. And he has played for three area colleges – Montana, Lewis-Clark State and now Eastern.

For Von Hofe, the cold was something he had to get used to as a collegian.

He’s from Australia, where the temperature never hits single digits – and it’s measured in Celsius. But he’s also a gym rat, a condition made easier by the biting cold of the West Plains. I mean, would you rather be inside toasty Reese Court practicing jump shots, or walking down Cheney’s Elm Street while the wind blows?

As good as those performances were, they pale in comparison to the show Gonzaga’s Nigel Williams-Goss put on in a slightly warmer locale, San Francisco.

The point guard went off against USF, hitting 12 of his 15 shots, making all nine of his free throws and scoring a career-high 36 points. And he grabbed 11 rebounds.

Williams-Goss, who grew up outside Portland but played his high school ball at Findlay Prep near Las Vegas, must be adjusting well to Spokane’s winter weather.

He got his first taste of it last year when he redshirted after transferring from Washington. Since becoming eligible this season, all he’s done is lead the undefeated Zags in scoring.

He must have used last year’s cold winter days well. In his two years with the Huskies, Williams-Goss shot 36 and 26 percent from beyond the arc, respectively. This season he’s at 42 percent.

Improvement like that takes practice. Lots and lots of practice. But then again, what else is there to do when it’s this cold outside?

Gonzaga: It’s not often Mark Few uses words like phenomenal, but that was his adjective of choice after Williams-Goss’ performance last night. Jim Meehan was in San Francisco to record Few’s comments and he passes them along in his game story. He also has a notebook from the game. We chipped in with our look at the TV broadcast, which also included a lot of praise for Williams-Goss’ game. … The most anticipated WCC game last night occurred just across the Bay in Moraga. Saint Mary’s remained undefeated in league play by holding off BYU, 81-68. … Down the road at Santa Clara, the Broncos routed GU’s next opponent, Portland, 70-42. … Pepperdine edged Loyola-Marymount and Pacific went into San Diego and edged the Toreros. … In women’s hoop, the Zags earned their first WCC victory, defeating USF at McCarthey. Whitney Ogden has the story and Colin Mulvany the photo report.

WSU: The Cougars’ football coaching staff is officially back at full strength. Jacob Thorpe has the story of WSU hiring Derek Sage. He also has a piece on a commitment from a Westside running back. … Both of those stories are covered by Stefanie Loh in the Times as well. … Commitment? That lasted for this player as long as a scholarship wasn’t available at USC. … Around the Pac-12 in basketball, USC handed Stanford another loss and UCLA outscored California at Pauley Pavilion. … Arizona is playing better, as Utah found out last night in Tucson. … Arizona State held off Colorado. … Oregon is headed to Pullman and the Ducks hope to have an injured player back. … Oregon State’s free throw shooting is not good.

Idaho: It hasn’t been an easy season for the Vandals, or a healthy one. They lost again at home, this time 70-57 to Montana and are 0-2 in conference play. Josh Wright has the story.

Preps: Greg Lee stayed in Idaho last night and covered the girls’ basketball showdown between Post Falls and Lake City. It turned out to be the Trojans’ night, as they won 54-31. … We also can pass along girls and boys basketball roundups, a gymnastic story and a wrestling roundup. Seahawks: The Hawks have a magic number offensively. … Who the heck is Richard Sherman and why is he the way he is? … The defense hasn’t been nearly as good since Earl Thomas went down with a broken leg. … Will the fans make the earth shake Saturday? … Tom Cable may end up becoming a head coach again.

Sounders: Four Seattle players were called to the U.S. National Team training camp and the list was full of surprises.

• It’s supposed to begin warming up. And then start snowing. Oh well, spring is coming. Someday. Until later …