With President Donald Trump poised to appoint his second justice to a U.S. Supreme Court seen as ideologically deadlocked, focus has returned to the 45-year-old court ruling that assured women’s access to abortions.

The U.S. House of Representatives won’t have a say in Brett Kavanaugh’s nomination to the nation’s highest court, which may again review its decision in Roe v. Wade. But the candidates vying for Eastern Washington’s seat in Congress present clear divides on their opinions about the legality of the procedure, and what lawmakers can do with their power of the purse to influence where and when consultations can take place. 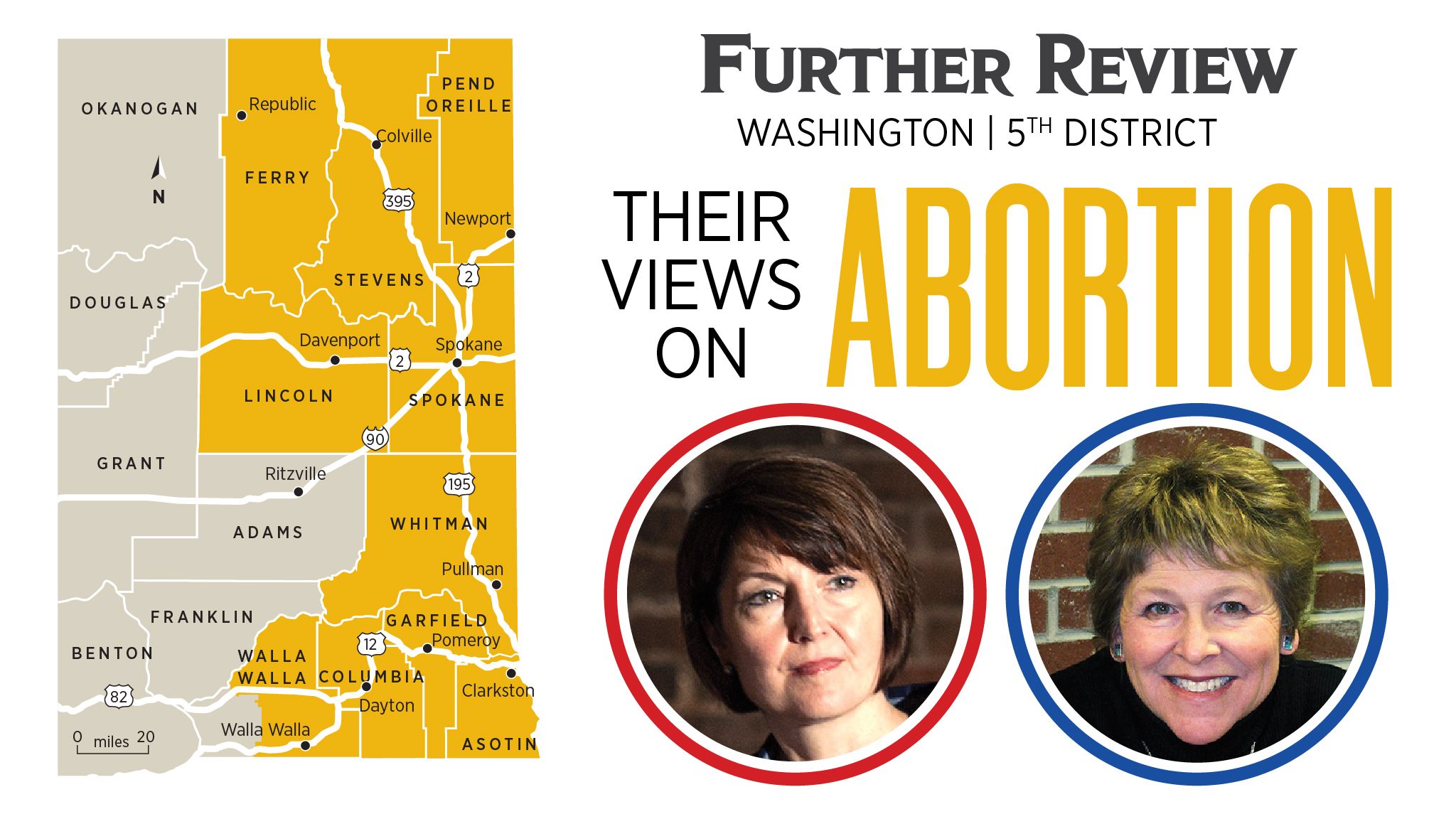 Rep. Cathy McMorris Rodgers has a long legislative record of supporting policies opposed to abortions. Eleven years ago, she sponsored (along with 112 other lawmakers) legislation that would have taken a protection in the Constitution’s 14th Amendment – the right to life – and applied it to unborn children. The bill never received a vote.

“I believe that life begins at conception. I support the dignity and value of every life, including life in the womb,” McMorris Rodgers said in an interview last week.

More recent votes have included one in favor of legislation that would criminalize abortions performed after 20 weeks, except in cases of rape or incest or when the life of the mother is jeopardized. The congresswoman also condemned laws in countries like Iceland, where access to prenatal screening has led to the termination of pregnancies with indications the child will be born with Down syndrome. McMorris Rodgers’ son Cole was born with the disorder.

Lisa Brown, McMorris Rodgers’ Democratic opponent, has been endorsed by abortion rights groups that include NARAL Pro-Choice America and EMILY’s List. She’s also endorsed by the political arm of Planned Parenthood, an organization that has been in GOP crosshairs for proposed funding cuts because it offers abortion services. That scrutiny has intensified in recent years. The organization is quick to point out abortion services make up a small fraction of the health care offered at its clinics, which include screening for diseases, birth control and pregnancy testing.

Brown said she was raised Catholic and respects those who have a moral disagreement with abortion. But the government shouldn’t be interfering in a woman’s health care decisions, she said.

“I don’t think there’s a problem that needs to be fixed,” Brown said.

Those perspectives persist in the candidates’ views on the Supreme Court’s decision on the matter. Brown said the issue is settled law, while McMorris Rodgers said she would welcome the panel taking another look at the case.

“Roe v. Wade concluded that women have a constitutional right of privacy over their reproductive health decisions,” Brown said. “I believe that abortion should be safe and legal.”

“What it did, was it forced all states to allow for an abortion at any stage of pregnancy,” McMorris Rodgers said. “I think it’s important to remember that even if the court ruled, it would ultimately return to the states to decide what the law in their state would be.”

The controversial Supreme Court ruling did give women the right to obtain an abortion under the 14th Amendment’s right to privacy. However, it also allowed states to impose restrictions once the fetus is considered able to live outside the mother’s womb. Most states now ban abortion after a certain point in the pregnancy.

States determining their own laws to allow or prohibit abortion would be the most likely scenario, according to reporting by the New York Times, should the court reverse the 1973 decision after a new justice is confirmed. McMorris Rodgers backs Kavanaugh, and has since Trump announced his pick following Justice Anthony Kennedy’s retirement this summer.

“I believe that he’s going to respect the Constitution, and individual rights and freedoms in this country,” the congresswoman said.

Brown was more cautious in her remarks on the judge.

“I believe (senators) deserve to have his White House records to evaluate him on,” Brown said, referring to a push from top Democrats in the Senate for release of Kavanaugh’s records during his time as an attorney in the George W. Bush White House. “That is very concerning to me, that there seems to be this rushed effort.”

The candidates also differed on congressional funding for Planned Parenthood. McMorris Rodgers supports ending federal funding under the Title X program, a federal source of assistance for low-income families intended for family planning, to go toward the nonprofit. That money should instead go to federally qualified health centers, which do not focus specifically on contraceptive care and family planning.

“I do not believe that federal funds should go to fund abortions, or abortion providers,” McMorris Rodgers said. She reiterated this at a Spokane town hall last week, saying she didn’t believe there was popular support for federal funding to go to providers of abortions.

Critics have argued those federally qualified health centers, though more numerous, are not set up to perform the same kinds of services Planned Parenthood provides to the same number of patients.

“The large majority of Americans do not want to see taxpayer dollars used to fund abortions,” McMorris Rodgers said. As pointed out by viewers of the town hall on social media, some polls suggest otherwise. A telephone poll in May of 1,000 likely voters conducted by the firm Rasmussen Reports, which is typically seen as skewed slightly to conservative positions, found that 34 percent of poll respondents approved such a ban, while 47 percent did not. About one in five of those polled – 19 percent – did not have an opinion.

A Quinnipiac University poll conducted last year did show that a majority of self-identified Republicans supported ending federal funding for the nonprofit.

Federal law prohibits funds doled out by Congress to be used for abortion services. Planned Parenthood uses the money for its many other reproductive services. But critics argue that the federal stream of money frees up the nonprofit’s collections to continue providing the procedures, or counseling for them.

Brown said a federal funding decision should not be made based on the scope of services provided by a health care center.

“What the Trump administration has called for is to deny funds to any of these clinics or health care providers if they tell the women the full scope of legal services that they are receiving,” Brown said. She was referencing proposed rules published in May that state a center receiving federal funding under the program “may not perform, promote, refer for, or support, abortion as a method of family planning.”

Planned Parenthood has targeted the action as a de facto “gag rule,” which prevents providers from counseling patients about abortion options. The administration says under the new rule, providers would be able to counsel patients, just not advocate for the procedure.

Brown and McMorris Rodgers also differ slightly on what legal requirements faith-based organizations that advocate for options other than abortion to pregnant clients must tell visitors. The issue for crisis pregnancy centers, as they’re known, came up in a closely decided Supreme Court case this summer. The panel struck down a portion of a California law that required state-licensed centers to provide information about abortion.

Brown said she believed such a requirement should only exist if the faith-based centers receives public funding.

“I believe any clinic that is publicly funded needs to provide the full range of information to their patients,” she said.

McMorris Rodgers said the issue came down to the free speech rights of those who ran such a center.

“That would violate their conscience,” she said. “I believe that it would actually be protected under the First Amendment.”