A GRIP ON SPORTS • Turned on the Mac this morning. Brewed a cup of Dunkin. Clicked on Firefox. Went directly to Dictionary.com. Typed in “bad loss.” Guess what came up? Read on.

• An old joke? Well, yes. But the Seahawks awful performance – I’m taking everyone’s word for it because I was stuck in Portland’s airport yesterday and only saw it in bits and pieces – in the muck that is Santa Clara’s Levi’s Stadium – the site of our national football title game by the way – had to qualify as a “bad loss,” right? 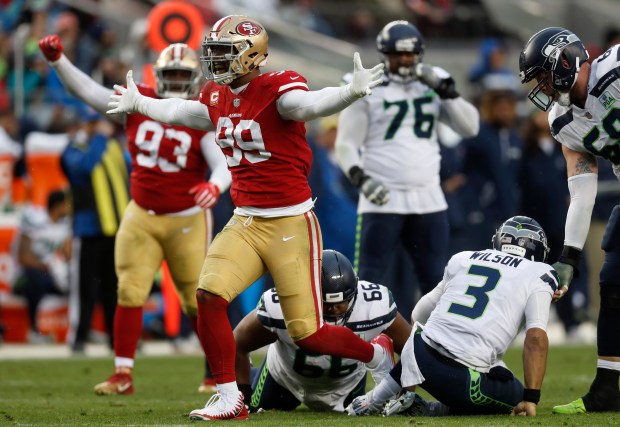 I mean, c’mon. The Hawks had won their last four games and the last 10 times they had faced San Francisco. They were on the brink of clinching a playoff spot. And their opponent had already lost 10 games. They were down to their eighth quarterback or something.

As was the case in a couple losses last season, a missed kick – in this one the first extra point – turned out to be the Hawks’ ultimate undoing. Well, that and about 74 other mistakes. But by all means, let’s blame Sebastian Janikowski.

It’s not like he is a Pro Bowl middle linebacker or something – as his attempted “tackle” showed. Or, even, a football player. He’s a kicker. So fair game.

As for the rest of the Hawks, in the parts I was able to watch outside the airport bar or the other pub or on the guy’s phone next to me, they looked listless. Not all that interested. And lacking a certain, how to describe it, ability to block in the middle of the offensive line?

When one of your reserve offensive guards takes the term “holding off the pass rush” literally, you are in trouble.

So the Hawks lost. Big deal. All they have to do is win one more game, right? And then they have reached the promised land.

Kansas City comes in next Sunday night, needing a win to stay ahead of the Chargers and with a couple extra days rest. That’s a tough nut.

Then there is Arizona. A nothing-to-lose Arizona. Let’s just put it this way. If Seattle can’t beat the Cardinals at home with the playoffs on the line, then it doesn’t deserve to be in them. It’s as simple as that.

Then again, they same could have been said about yesterday’s game.

• We want to pass along a silver lining for you Gonzaga fans. We thought it would be a nice pre-Christmas present after the first back-to-back losses the men’s basketball team has suffered in a few years.

It has to do with Killian Tillie’s injury.

In about three months, everyone might understand it had one positive effect: It allowed Filip Petrusev to show what he can do.

Yes, the Zags have missed Tillie. Everyone would. He’s that good. But while he’s been out, Mark Few has had to play a freshman that came into the season with a lot of holes in his game, especially on the defensive end.

If Tillie had been healthy, Petrusev may have been relegated to the final minutes of blowouts or the occasional appearance in the first half of big games when foul trouble reared up. Instead, Few, whose trust isn’t easy to learn, especially for big freshmen, has had to use Petrusev in key moments this season.

And the Serbian has responded. He’s done more than most would have expected, maybe even more than Few expected.

That will pay dividends later this year. Book it. There will be a key game some night between now and April in which the Zags’ bigs are in foul trouble. They will need Petrusev to hold the line. And, thanks to the experience and trust he’s earned these past few weeks, he will be able to do it.

Gonzaga: Rebounding. Defense. Two pretty important parts of winning basketball games. They are also the two subjects, along with Petrusev, Jim Meehan covers in his rewind of the Zags’ loss at North Carolina. … The women struggled on the road yesterday, but still found a way to get by Missouri State, 70-67. … Around the WCC, USF may just be Gonzaga’s toughest foe in conference play. The Dons won again yesterday, using their much-improved defense to lock down Cal State Fullerton.

WSU: Around the Pac-12, bowl preparation is still going on for many schools, including Washington, which will be playing in the Rose Bowl for the second time this season. … Oregon is getting healthier. … One Utah player wants redemption. … You are no longer in the SEC Mel Tucker. … In basketball, Arizona had a listless game. That’s not good.

Chiefs: Christmas break is here for the WHL, which may not be a good thing for Spokane. The Chiefs have won the last three games, including last night’s 6-5 overtime win over Seattle at the Arena. Kevin Dudley was there and has this game story.

Preps: Jim Allen examined the stadium issue on Sunday. He does a good job of explaining fear, not opportunity, drove the school board’s hasty and myopic – my description – decision.

Seahawks: If these grades aren’t all Ds and Fs, then grade inflation is real. … Yes, the loss was a stunner. … Chris Carson had the type of physical touchdown run we’ve seen in a Seahawk uniform before. … The season will go on. … Richard Sherman is happy. Bet that warms your heart. … By the way, the Hawks set a franchise record for penalty yards. So it is the officials’ fault.

• I grew up in California. Was forced to mow by dad’s lawn for years. If he were still alive, maybe he could fix the turf at Levi’s Stadium. He used to say even a guy with a gangrene thumb could grow a great lawn in California’s weather. I guess the guy in charge in Santa Clara comes from Greenland or the Antarctic or somewhere. Until later …