By Ammi Midstokke For The Spokesman-Review

“I want to show you what I’ve been working on,” Ryan Soltis says as we tromp through ice-crusted snow toward his sleeping garden. He opens a large gate, and we make our way around what appears to be a chicken coop, if chickens required luxury North Idaho cabins for effective laying.

I’m not sure, but I think I hear them listening to Vivaldi under their soft, red heat lamps. One would expect a violin maker to have sophisticated chickens.

Soltis is one of the secret treasures of the Idaho Panhandle, his fame preceded by his humility and unassuming presence. He grins wide, his eyes twinkling more with the joy of sharing than a sense of pride.

From a distance, he looks like any other potential log-peeling, woodworking man one might come across here. He’s probably wearing blue jeans, some kind of plaid flannel, and lined boots most days of the year. But if you walk into his wood shop, a different person unfolds, complex and introverted in a thought process he shares with only himself. 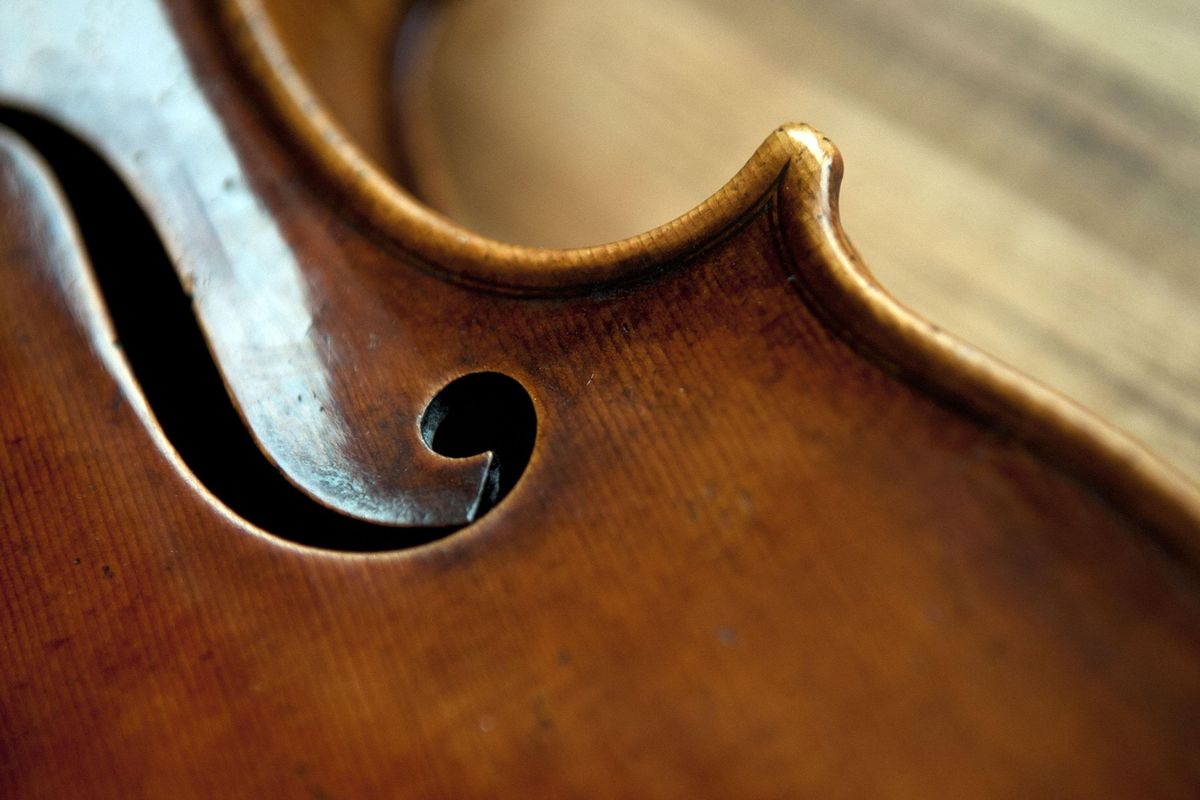 A viola made by Ryan Soltis is photographed at his home in Sagle, Idaho on Tuesday, Dec. 11, 2018. He has been making violins for a number of years in his small workshop just south of Sandpoint. A single violin takes him several months to make and he uses woods sourced from around the world, then hand carves the entire thing. His violins cost upwards of $30,000 and are found in some of the most renowned orchestras of the world. He hand delivers them to the artist, who has typically waited over two years for their instrument to be completed. He makes violas and cellos as well. (Kathy Plonka / The Spokesman-Review)

Violin making tends to be a lonesome job, even for a luthier as renowned as Soltis. His instruments attract some of the most acclaimed musicians from some of the most beloved orchestras and quartets in the world. They often wait years for their instrument to be made and then hand-delivered by Soltis. One does not simply FedEx a $30,000 violin of this caliber to Denmark, apparently.

For some of his instruments, the process started more than a decade ago when a certain piece of wood caught his eye. In his mind, he has each piece filed away in a mental library of visual and audio qualities. This ability has contributed to the row of awards for craftsmanship and tone that hang on the least visible wall of his shop.

The lighting in here could be called delicate, the atmosphere nurturing. When an artist works with such precision of movement and then perception of sound, it behooves them to prioritize self-care. The walls are covered with utilitarian decor: organized displays of purfling and cremona tools and a framed picture of a Stradivarius.

The shelves are home to a few books on violins with thick glossy pages of famous instruments worth fortunes and renowned for their sound and history. His CD collection offers everything from Neil Young to Billie Holiday, some Ace of Base, and just a few of the classics. He claims to play only well enough to know if his instrument is meeting his expectations.

Soltis was likely always destined to be a violin maker, even if he didn’t know it. He grew up in the small town of Warroad, Minnesota, shooting for straight C’s through high school – except for shop class, which he passed with an A.

On an excursion with his father to buy wood for a maple coffee table, they found themselves at a lumber shop where the owner milled wood for violin makers. Intrigued, he inquired about the art only to be told, “Don’t do it. It’s too hard.”

He registered at the Violin Making School of America directly after. “I have a hard enough time speaking English,” he said. “I figured I better stick to a school in the U.S.”

His instruments are hand-shaped over thousands of scrapes and shavings, microscopic movements of his fingers as he works the wood until the instrument itself emerges – as if it had always been in there and he had some kind of magic to release it from its blocky prison. And thus, no instrument is like another in tone or pitch, shape or color. Each one seems to have its own soul, to be its own person.

Growing up a Buddhist, it seems a fitting spiritual journey. Soltis explains the soul is in what we do while we are alive. Generations to come will be moved by the music these pieces make.

The blood, sweat, tears, joys and frustrations of his efforts are indeed poured into these violins, if not painted on them. Soltis makes all his own varnish, naturally, with pine resin and, I assumed, elk blood.

“Blood actually turns black in this context,” he said, removing all romanticism from famous films and explaining the temperatures at which rosinates must be slowly cooked for appropriate consistency. Perhaps one of the most painful parts of violin making is the antiquing processing. He visibly shudders as he describes the process of damaging an instrument he’s so meticulously molded.

Across the workbench, an unfinished violin sits, awaiting his hands. On the inside, black lettering says “#101. Soltis.” That does not include the violins he made in school.

In a humble description of what makes a good luthier, Soltis describes an almost pathological pursuit of perfection, something that births differently from each instrument. He chuckles at the mention of obsessive-compulsive tendencies, a willingness to patiently, tirelessly work on the same thing for days, weeks, with little to no human interaction.

He struggles to admit that he’s good at what he does. The broad smile reappears as he suggests maybe it is because he has “some of the particular features” of a violin maker – as if his talent were as incidental as the grain a piece of wood might display.