A GRIP ON SPORTS • We have some Super Sunday thoughts from early on Hangover Monday. Read on.

• Yes, we watched. Not from start to finish, mind you, but we floated in and out and until we finally got hooked, like a Cutthroat trout on one of Mark Few’s hand-made flies.

And, no, we are not hungover in the classic sense. It’s impossible to be truly hungover when you don’t drink anything, but it is possible to be suffering from a food hangover, brought on, in our case, by too many fried items and an overload of German sausage. 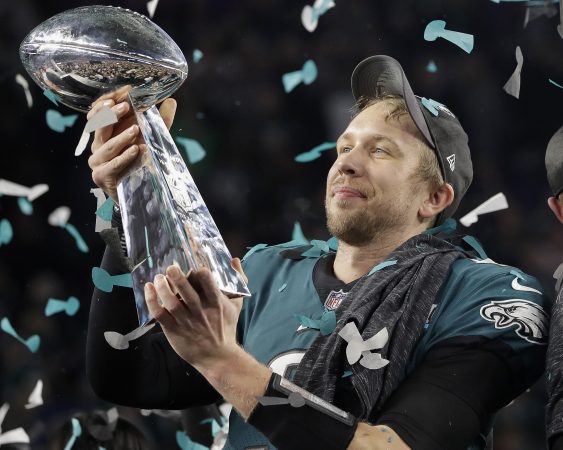 • Were you not entertained? If so, then why is Arena League Football on life support? That’s what the game reminded me of, an old Spokane Shock battle with Iowa or Arizona, where defensive stops were optional and turnovers decisive.

As I watched the first possession and saw two tackles by offensive lineman, it didn’t surprise me that no flags followed. It was if the league wanted to ensure two things: Tom Brady was going to survive and the Eagles wouldn’t have to play with their third-string quarterback.

But by playing loose with enforcement of that rule, one other thing was brought into play. Because if you let the offensive linemen get away with more than usual, eliminate pressure on the quarterback, you ensure there is going to be a high-scoring game. And there was.

• I’m sure most of you went to bed last night still trying to figure out what constitutes a catch in the NFL, but I had a different question: Did Ferndale High run the play Doug Pederson used for the two-point conversion? It seemed like something right out of 1980s high school football.

Even Bill Belichick, the master of film study, probably didn’t dig that deep into Pederson’s past. My guess is Pederson once dropped the same pass in a crucial loss to Squalicum or something like that.

• Speaking of that play, and the Seahawk fans on social media who expressed their wish their team had used something similar in the Super Bowl loss, it wasn’t the Xs and Os, it was the execution.

The Patriots ran a similar play earlier in the game. The pass was just a bit too long and slipped off Tom Brady’s fingertips. It killed a drive. The Eagles ran a well-designed play. But if the pass hadn’t been catchable, the blocks not well done, it’s just a footnote.

If the Hawks had executed better from the 1-yard line in the game we will not mention ever again, they would have back-to-back Super Bowl titles. It also ironic Malcolm Butler, who made the crucial play in that game, didn’t get on the field for a defensive snap yesterday.

• OK, we know we can’t skip the commercials. After all, they are why a good number of people watch the game.

We join the rest of America in saluting the New York Giants. They completed a pass yesterday. And, like the Eagles, their quarterback caught it. The salute to “Dirty Dancing” was the best commercial of the day.

My second favorite? Any one that didn’t feature “dilly dilly.” Or maybe it was this spot. And, lest we forget, there was one that seemed to bother a lot of people. That happens pretty often too.

WSU: Hey, there was a basketball game yesterday in Pullman. You may not be surprised to learn the Cougars lost. They battled, of course. Came close, of course. Actually led in the second half. But they lost. Again. This is one of those historically bad years Washington State has every two decades or so. (Or just about every year in the Paul Graham era.) So will change come? Who knows? Anyhow, Theo Lawson has the game story and video of coach Ernie Kent and a trio of players from afterward. … Arizona State held on for a weekend split thanks to some crucial second-half contributions. … The women lost at Arizona State. … Elsewhere in the Pac-12, Washington is still celebrating the upset of Arizona. … When the Wildcats can’t hit from outside, they are ripe for the picking. … How far with Arizona fall in the Top 25? … From football, there has been a changing of the guard in the desert.

Gonzaga: Zach Norvell gets picked on at times. GU’s opponents try to isolate him when he’s playing defense. And Few doesn’t let up when trying to motivate him to play better on that end of the court. But if there is one thing the freshman can do, it is make key hoops. He did it again Saturday. Jim Meehan has more in this follow on the win over BYU. … Speaking of the Cougars, they were encouraged by their showing in the Kennel.

Seahawks: Some sad news broke late Sunday evening concerning Frank Clark’s family. A fire in Cleveland cost his father his life. … The Hawks are looking for linebacker depth. … We have a couple more Super Bowl stories – one of which even mentions the contributions of Spokane’s Bryan Braman – and a whole bunch of pictures to pass along.

• Be honest now. You fully expected Brady and the Pats to drive down the field, score, convert the two-point play and win on overtime, didn’t you? Me too. Until later …