A GRIP ON SPORTS • On the first day of January, the new year gave to us one incredible college football game. And then another Alabama win. Read on.

• The fears of three-quarters of the nation’s college football fans were realized yesterday when the two SEC teams won their semifinals. For the next nine months all the conference’s honks will be laying on their the-SEC-is-best horns.

OK, the conference’s two teams in the way-too-limited college football playoffs won yesterday. That’s not proof the choice of Alabama over Ohio State or UCF was the right one, just as if the Crimson Tide losing would have proven they were wrong pick. 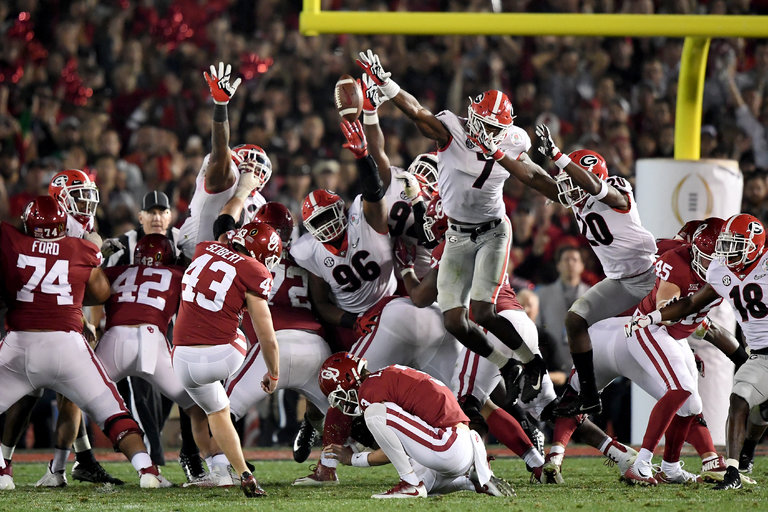 It just proves they were better yesterday.

As was Georgia, though barely.

(And, before we move on, what’s with the Rose Bowl every year? Why is it the granddaddy of them all – thanks again Keith Jackson – always seems to deliver the best game of the bowl season? It hasn’t mattered if the game was a CFP national semifinal, a traditional Big Ten/Pac-12 contest or even if it was filled with a BCS matchup, the Rose Bowl game transcends all the noise around college football and delivers us a battle to remember.)

After another epic Rose Bowl game, the first to go to overtime and, then, two overtimes, won by the Bulldogs, the Sugar Bowl had to pale in comparison. It did, unless you are a fan of two yards and a cloud of artificial turf pellets. That’s what Alabama, and it’s usually solid defense, forces its opponents to do. You have to be careful with the ball, because any turnover can turn around the game.

Two in less than a minute? It’s over, as it was late last night in New Orleans.

So next week we get the championship game we may not want, but which we deserve. If college football fans aren’t going to boycott these games until the powers that be add four more teams – or at least actually include an undefeated lower-tier team like UCF, instead of patting them on the head and sending them to some bowl that means nothing in the title picture – then we are going to be stuck with games like Alabama versus Georgia in Atlanta.

You know, another conference game masquerading as a “national” title contest.

WSU: The punch USC’s Chimezie Metu threw on Sunday night not only cost him the rest of that game, it also cost him the first half of the Trojans’ next one. It’s college basketball’s version of targeting. Theo Lawson has the story, as do the Los Angeles newspapers. … Theo also explains his vote in the Associated Press basketball poll.

Elsewhere in the Pac-12, there will be an interesting week ahead in hoops, with the best matchups coming in Utah, with the undefeated (in conference) Utes hosting Arizona and Arizona State. … Those games should have some effect on the national rankings. … The Oregon schools will face off this week as well. … In football, the Cougar offensive line probably threw a party yesterday. Washington’s Vita Vea is headed to the NFL.

Gonzaga: Winning two West Coast Conference games by 30-plus points didn’t see to impress the poll voters much. Jim Meehan has a story on Gonzaga’s ranking. … Whitney Ogden has another story about the Zag alums visiting. … Around the WCC, BYU’s game with Saint Mary’s is still earning headlines in Utah. Seahawks: It was locker clean-out day, though how anyone could move their stuff around with the media scrum, is tough to visualize. Look at the Seattle Times’ picture of the crowd around Russell Wilson. … There was some news, though, mainly about who might be back and who might be going as the Hawks try to reload in the offseason. … One of the masterminds of the recent success, general manager John Schneider, might also be pulled away from the organization. There’s an opening in Green Bay.