A GRIP ON SPORTS • When you are young, it seems change comes slowly. When you are no longer in that age category, it’s hard to believe sometimes how much has changed. Read on.

• Take today for example. A holiday. It wasn’t when I was young. Now it is.

As a kid, I can remember Martin Luther King, Jr. and my parents talking about him. I’m pretty sure it wasn’t positive. Not much politically at that time was.

I remember his face on the TV screen. I remember how so many rallied to his cause. And I remember the anger so many had when he spoke, though for the life of me I couldn’t figure out why.

I remember how the nuns at my Catholic school talked glowingly of him. How the old priest called him a rabble-rouser or something of that ilk.

And most of all, I remember how and when he died.

At that point, what Dr. King was trying to accomplish seemed so far away.

Maybe it still is. But from this perspective, some 50 years later, it doesn’t seem so.

I still remember the spring and summer of 1968. A lot of those memories have to do with Little League and bike rides, sure. But as an avid newspaper reader, and not just of the sports section, those days were filled with stories of war, both abroad and at home. 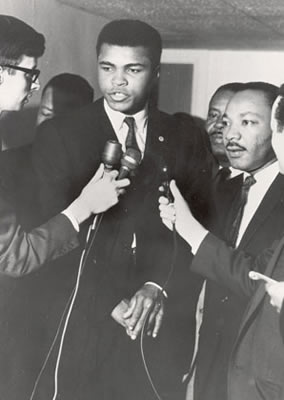 My parents didn’t hide it from me. My dad worked for the L.A. Times. The news was always on. The world was changing. It shocked them, but they wanted me to understand.

Honestly, I didn’t. It seemed so simple. My parents wanted me to get along with everyone and yet their generation wasn’t practicing what they preached. It made no sense.

This was the land of opportunity. Where every boy – sorry, what was true then is still true today, that hasn’t changed ­– had a chance to grow up to be President. Or the Dodgers’ shortstop.

Everyone was equal. There was, as the flag salute said, liberty and justice for all. At least those were the values my parents spoke about. And yet they didn’t seem to apply to everyone.

I do think my dad believed in them, though. He was the grandson of immigrants and had made it, helped win a war, owned a home, had a good job. Even though he was Italian and there were clubs in Pasadena he couldn’t join.

His kids would be able to, he was sure. And yet he didn’t, at that time, identify with Dr. King’s goals. He would, over time, change his view. Of that and many others’ struggles.

His son never had a chance to be President – or play for the Dodgers. Driving people to the polls in 1972 so they could vote for Richard Nixon – it was my mom’s idea – probably disqualified him for either job, due to poor decision-making skills.

But in the 50 years since, one thing has been clear. Times change. People change. Circumstances change.

Never fast enough to satisfy those who want it to change. Way too fast for those who want the status quo. But as long as enough people are committed to making change happen, it will.

It’s a lesson that takes a lifetime to learn.

WSU: Thanks to the NCAA mandate of a 10th assistant coach, there has been more assistant coaching moves and news this offseason than I can ever remember. Theo Lawson has a story on the latest Washington State hire. At least the reports concerning it. … The hire is covered by the Times’ Stefanie Loh. … The women played well in Berkeley but came up just short against California. … Elsewhere in the Pac-12, Arizona finally made its head coaching hire, after a couple weeks of many names being bandied about. The choice: Kevin Sumlin, the former Washington State grad assistant and Texas A&M coach. The choice is a popular one. … Staying in football, Washington received a commitment yesterday for a crucial recruit: running back Myles Gaskins. The senior-to-be is staying at UW. … There was one conference basketball game yesterday, with USC beginning to round into form with an 84-67 rout of reeling Utah at the Galen Center. … Colorado finally picked up its first road win and the Buffs hope it leads to more.

Gonzaga: There is one showdown every fan of West Coast Conference basketball wants to see. Gonzaga versus Saint Mary’s. It happens for the first time this season on Thursday, which means the Zags can finally admit to preparing for it. Jim Meehan has the story. By the way, expect the teams to meet twice more. … Around the WCC, BYU hopes it can build on the momentum of its rout of Santa Clara.

Seahawks: I didn’t see a lot of the NFL playoff games yesterday, but I did see the final few minutes of the Minnesota Vikings win over the Saints. And was as amazed as any one else. If you look at the picture of the final play I’ve included here, you will see two people in the background, one a white-haired gentleman, the other wearing a hoodie, looking the other way. What are they looking at? The most exciting NFL play of the year is happening right in front of them.

Mariners: If this happens, if Mike Zunino wins an MVP award, I’ll be quite surprised.

• Best movie speech about change? I would go with the one James Earl Jones makes in “Field of Dreams.” You know, about the constant of baseball. But how does that square with the designated hitter? Until later …