While the Zags in their infancy may have started by walking before they could crawl in 1999, storming into the NCAA Tournament’s Elite Eight in just their second appearance and following that with consecutive Sweet 16 bids, Gonzaga fought through subsequent growing pains and arrived at the precipice of tournament adulthood in 2015.

The Bulldogs’ program growth has showed in the last four seasons, with an Elite Eight return in their 18th try in 2015, an unexpected Sweet 16 trip the next year and last season’s near miss in the national championship game, cementing this fact in the nation’s consciousness: GU has become a perennial contender, not just for a couple of scrappy wins here and there, but for the full-blown maturity of a nationally renowned powerhouse program 21 seasons in the making.

CAN THEY GET OVER THE HUMP?

When they’re in the top half of the bracket, the Bulldogs have traditionally fared quite well, sporting an 11-1 overall record against seed Nos. 4, 5, 8, 9, 12, 13 and 16. The lone loss: 9th-seeded Wichita State sent the Zags, the top overall seed in 2013, packing. The only downside of the top half of the bracket? No. 1 seeds, who’ve beaten the Zags all eight times. If GU wants to make its fourth straight Sweet 16, the road likely leads through No. 1 seed Xavier Musketeers.

HOW THE ZAGS HAVE FARED

A look at how GU has progressed through the NCAAs over the last 23 years, including how they’ve done against specific seeds: 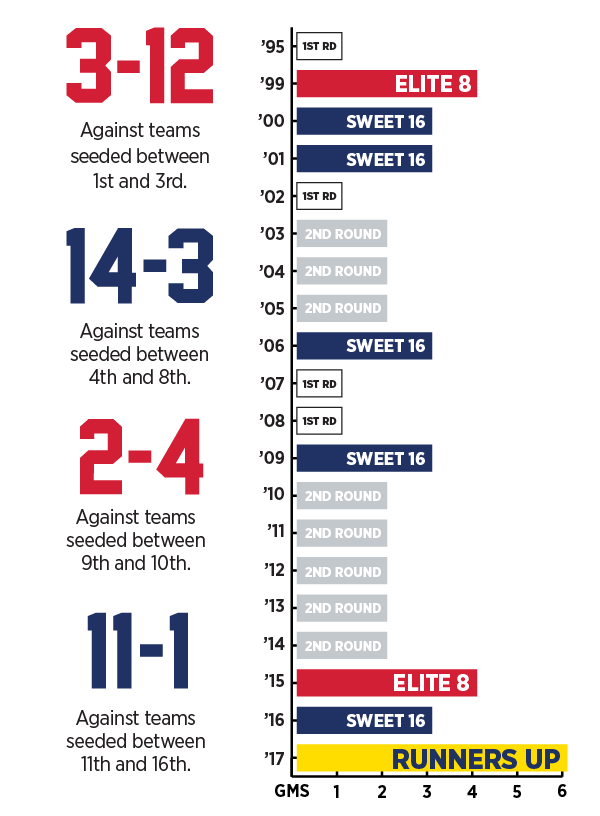 Generally, the closer teams play to their home the better the results, and Gonzaga is no stranger to this phenomenon. The Zags are 7-1 when playing NCAA Tournament games in Washington and Oregon (5-1 in Seattle, where both Elite Eight runs began, and 2-0 in Portland), which bolsters high hopes for their chances in Boise this year. They have a 75% success rate of making at least the Sweet 16 when playing their opening games that close to home. They’ve split two chances each in Colorado and Arizona, had a mixed bag in Utah (made Sweet 16 or better 2 of 5 tries) and advanced out of Tennessee in one try. 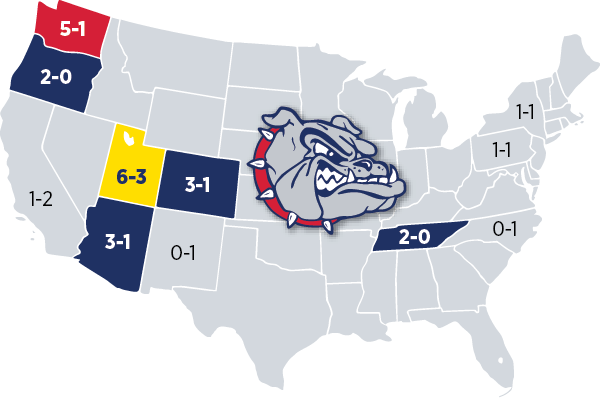 In 2004, the tournament shifted to awarding “regional preference” to teams seeded 1st through 4th, placing them as close to their home (and their fan base) as possible based on the chosen sites that year. Gonzaga’s rise to top-4-seed prominence also began that year, and it’s made five Sweet 16s in eight tries as a high seed since then. But hey, isn’t that what improving programs with top-4 seeds do anyway?

Consecutive wins for the Zags entering this year’s tournament, matching the number they had entering the 2013 tournament as a No. 1 overall seed. A testament to their two decades of dominance in the WCC: This is the fifth time in the last 17 seasons GU has entered the NCAAs with a win streak of 14 or more (20 is their record in 2004).

Forty-nine NCAA games over the last 23 years has created an extensive and diverse postseason record book, filled with impressive single-game and career marks. Some notables:

Scoring average for star guard Dan Dickau in four games during 2001 and ’02 tourneys.

Made field goal attempts for Adam Morrison in his seven games (51.8%).

Points for Morrison vs. Xavier in 2006 tourney. 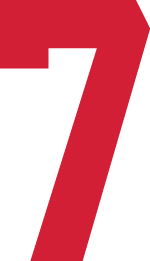 Single-game record for made 3-pointers, set by Steven Gray vs. Davidson (’08).