A GRIP ON SPORTS • It was not a good Sunday for football teams in Seattle. Not good at all. Read on.

• No matter which football you prefer, the type invented here or the sport the rest of the world calls by that name, if you follow the Seattle team you were disappointed yesterday. 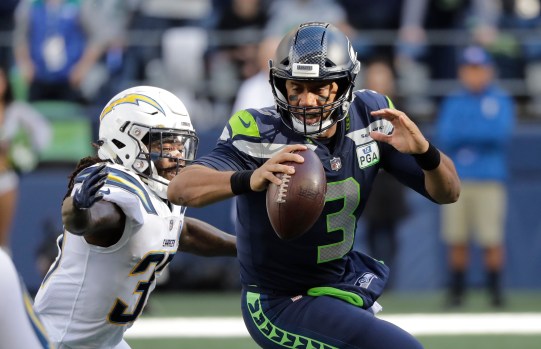 The Seahawks, who some folks seem to think are the spitting image of the 2012 team, couldn’t make a tackle in the first half and could make a comeback in the second, losing to the Los Angeles Chargers. If you are keeping score at home, that means Seattle is 2-6 in its last eight games at CenturyLink. Some homefield advantage.

The Sounders, who share the CenturyLink turf, opened the playoffs on the road, facing archrival Portland in the first leg of a two-match series. Not only did Seattle lose, 2-1, they also were struck by the injury bug – Cristian Roldan and Chad Marshall – while being unable to hold a lead for the first time in months. In the good news category, it doesn’t look as if either injury is serious and the Sounders did score a road goal, which is always good (they are the tiebreakers in an MLS series).

But the bottom line is simple. Sunday was not the best of days in Seattle football history.

• Washington didn’t play all that well in the second half of its game with Stanford. But the Huskies picked up a much-needed win, holding off the Cardinal at the end. It was enough for the Associated Press voters to move them back into the top 25, all the way to 20th.

Utah, which lost at Arizona State, dropped out.

You know what that means? The only two Pac-12 teams ranked this week in the AP poll come from the northern-most state in the conference: Washington.

The last time that happened in whatever the conference was called over the years? Way back in 1936. And no, I didn’t vote in that poll.

Given the crazy nature of college football, that may change before the Apple Cup. Or it may mark another time both teams come in ranked. This time, though, it may be the first time in a while they are the conference’s only ranked teams.

• College basketball begins for real tomorrow. There have been some charity games – UW defeated highly thought-of Nevada in one – and some exhibitions – Washington State won its yesterday against an overmatched opponent – but the real games begin on Election Day.

Seems like an odd day to begin a season, but we’re not in charge of such things. Why compete for eyeballs when the season could have very easily opened a day later?

If the NCAA doesn’t believe college basketball fans aren’t also interested in following the election results, it is out of touch with its … oh, never mind. I’m sure I had you at “out of touch.”

WSU: Before we get to the basketball mismatch, let’s get through Theo Lawson’s football coverage first. There is his story on the poll, with Washington State remaining 10th in the AP but moving up to ninth in the coaches’ poll after the tight win over California. That home victory is the subject of this story, Theo’s day-after analysis of the game. … The Cougars received a commitment from a high school defensive end yesterday and learned their game Saturday in Colorado would kick off at 12:30 p.m. Yes, a day game. Theo has both stories covered. … He also covered the hoops game vs. New Hope, which doesn’t have anything to do with George Lucas or Star Wars or, more importantly, defending the 3-pointer. … Theo spoke with Larry Weir for the latest edition of the Press Box pod. … The volleyball team swept another Pac-12 match. … The Seattle Times has a WSU basketball preview this morning.

Elsewhere in the Pac-12, yes, it is poll time. And maybe time to try to make sense of the South title race. … Washington’s win over Stanford made some sense. After all, the Huskies are solid, their losses were all tight road games and they got a key player back. … Oregon played a solid game against UCLA. Now the Ducks have to shift gears and deal with Utah. … The Utes have to figure out what to do without Tyler Huntley. … Colorado will face WSU down a few receivers. … Oregon State just couldn’t get the running game going against USC. … The Trojans’ offense is making Clay Helton question himself. … UCLA may be using its backup quarterback this week. … Arizona State is the only team in the South who controls its destiny. … Arizona has been playing better.

Gonzaga: The S-R is sponsoring an event with Gonzaga legends tonight downtown, which would be worth your time if only to give my friend Dan Dickau a round of applause. Tell him it’s on me. … This year’s Zags have been getting plenty of applause during the offseason.

Chiefs: Spokane scored six goals last night in the Arena but that still wasn’t enough to pick up a win. Kevin Dudley was there and he answers the question of how the Chiefs could drop an 8-6 decision to Portland.

Preps: The Washington football playoffs pairings are set, this season picked by a committee. Dave Nichols answers the question of who all our local teams are playing. … There is other coverage of the seeding as well.

Seahawks: The Chargers are a pretty good football team, in the top of the second tier in the AFC. So why everyone is so surprised the Hawks lost yesterday is beyond me. Seattle is a middle-of-the-road NFC team who can beat some teams and lose to a lot of others. And the Hawks haven’t been defending home turf well for a year. … The second-half comeback was a good thing, but a trio of injuries has to be put on the bad side of the ledger. … Frank Clark can really rush the passer. … There was a Paul Allen tribute before the game.

Sounders: Seattle scored early but Portland fought back to take the lead and kept the Sounders from tying the match.

• As far as I’m concerned, college basketball can’t come fast enough. Now I will have an excuse to wrest the big TV away from the family bread-winner. She can watch the latest episode of “The Voice” somewhere else. Until later …