A GRIP ON SPORTS • What, there’s no Seahawk game today? What do we do? Well, there’s always another Saturday of college football to reflect upon. And why not? The way things are going around here, it’s worth a second or third look. Read on.

• If I were a few years older, I might believe last night’s 69-28 rout of Arizona was some sort of Crimson-colored, acid-induced flashback. But luckily I was young enough to miss Timothy Leary’s mind-expansion philosophies of the 1960s. Though I do remember 1997. 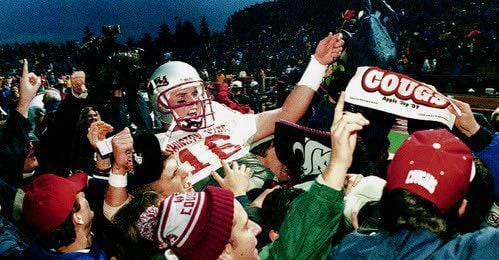 And that’s the season this one most closely resembles. At least is does after 11 games. Those are the only two times in the 12 decades of Washington State football in which the Cougars have reached the 10-1mark.

Remember that 10th win back then? The 41-35 Apple Cup victory before more than 70,000 in Seattle? My memory is of Ryan Leaf, a rose in his left hand, being carried around the Husky Stadium turf, but that might be a (legal) drug-induced recollection.

Leaf and the Cougars’ journey to Pasadena was the stuff of legends. It had been 67 years since Washington State had played in the Rose Bowl and few thought a team that had been 5-6 a year before would get there. Heck, heading into the Apple Cup, with a 9-1 record, Washington State was ranked 11th in the nation. A team they had defeated earlier in the year, 9-2 UCLA, was ranked ahead of them. So was 8-2 Florida.

The disrespect was real.

That may not be the case this season, thanks to Gardner Minshew, the mustache-coifed face of the 10-1 team. And Mike Leach, who is thought of outside of the Inland Northwest as college football’s version of a quirky uncle everyone enjoys listening to at Thanksgiving.

Minshew may have punched his ticket to New York and the Heisman Trophy banquet last night with his 403-yard, school-record seven touchdown performance, even if it came long after a majority of the voters had hit the sack.

He has a chance to put a lock on an invite Friday, when the Huskies travel across the mountains for what they figure is their annual Chris Petersen-owns-Leach-fest. OK, sure, Leach’s Cougars have yet to defeat a Petersen-coached UW team in four tries, but this Leach team is different.

It has more weapons. It has a more explosive defense. It has the home-field advantage. And it has the best story in the country in Minshew. He’s a throwback to a day long past, to the happy-go-lucky, seat-of-your-pants quarterback like Bobby Layne or Ken Stabler or, should we say it, Paul Crewe. And a mustache to match.

Friday should be a glorious day in Pullman.

• If you were hoping to watch Whitworth play a home Division III football playoff game and couldn’t get out to the Pine Bowl yesterday, you may have missed your chance.

The Pirates handled Claremont-Mudd-Scripps 48-6 on a sun-drenched cold day, and then found out afterward they were headed to Minnesota for the second round.

That’s to be expected, not just because St. John’s is one of the top-ranked D-III schools this season and won 84-6 over Martin Luther on Saturday, but because the Pirates hosted the Johnnies the last time these two schools met in the second round of 2006.

It must be Whitworth’s turn to travel. As it is most of the time, as those of us who have been following the school’s athletic programs for more than 10 minutes know all too well.

WSU: The late-night battle cut short the coverage a hair, but Theo Lawson has his usual game analysis, the difference makers and news, including Peyton Pelluer making his 52nd appearance, a Cougar football record. … Tom Clouse was also in Pullman and he has a story on Washington State’s fast start, Arizona’s slow one and, along with Kip Hill, the way a successful WSU football team impacts Pullman. … The guys in the office put together a recap with highlights. … Tyler Tjomsland has his usual in-depth photo report. … I had my thoughts from the couch in this TV Take. … From Tucson way, the Wildcats seem to have their problems in Pullman lately. … And a lot of night games.

Elsewhere in the Pac-12, Washington assured the Apple Cup would mean even more than it usually does by defeating visiting Oregon State. Then all the Huskies talked about Friday’s game. … Oregon knocked Arizona State out of the South race but it wasn’t easy. There is a lot of criticism of the Oregon offense from far-flung places. … The Big Game wasn’t played. Smoke got in the way of the game and the party. … There was a big game in Los Angeles and after UCLA ran over USC, it sure looks as if Clay Helton will be another of the coaches who failed in trying to follow Pete Carroll. … Speaking of coaches on the way out. Colorado will probably be looking for a replacement for Mike MacIntrye after the season. The Buffs lost to South champion Utah in the Boulder snow.

Gonzaga: The Maui Invitational is such a great tournament this year, it induced Jim Meehan into daydreaming. Or maybe it is the warm weather and ocean breezes. Either way, Jim has a story about the dream matchups available this week. … The Gonzaga women headed to Las Vegas for a revenge game with UNLV. They got what they wanted, winning 70-59.

EWU: The Dam Cup matchup with Portland State was played Friday night in the Rose City suburb of Hillsboro. But it seemed like it was played in the Spokane suburb of Cheney. It was almost a home game for the Eagles. Ryan Collingwood looks back at the rout with this story. … The basketball team picked up its first win of the season, riding senior Jesse Hunt’s career-high 32 points to an 87-80 win over visiting UMKC. Ryan also has that story. … Elsewhere in the Big Sky, I really don’t understand the conference tiebreaking procedures. Weber State, Eastern and UC Davis all finished 7-1 in conference play. However, they all didn’t play each other. Eastern lost to Weber but defeated UC Davis. Davis and Weber did not play. So EWU’s loss was to a 7-1 team. UC Davis’ was to a 7-1 team. Weber’s loss was to a 3-4 Northern Arizona team. And the Wildcats are the conference’s designated representative in the playoffs? When all three tied teams don’t play, the tiebreaker should be determined by worse loss. And WSU has that. Easily. Instead, the Wildcats earned the automatic FCS berth. … Weber earned the berth with a win at Idaho State. … UC Davis and Sacramento State had to play in Reno due to the smoke in the Sacramento area. The Aggies won easily. … Montana held a 22-point lead in the rivalry game with Montana State. At home. And lost. … Cal Poly is playing really well now, defeating Southern Utah in its last game. … Northern Arizona defeated North Dakota.

Idaho: Yesterday, we wondered how the Vandals would do in the Swamp, saying the game at Florida may not be pretty. It wasn’t for Idaho fans as Florida took a 63-10 victory.

Whitworth: The Pirates’ win in one of the area’s prettiest football settings was keyed by their dominating defense. Dan Thompson was in the Pine Bowl and has this game story while Kathy Plonka supplies the photo report. … The Pirate men are 2-0 on the basketball season after a win over Whittier.

CCS: One more match is all that stands between the Sasquatch and a perfect volleyball season.

Chiefs: Calgary hadn’t been playing well when it faced off with the Chiefs last night. Then the Hitmen did. They won 5-1. Kevin Dudley was in the Arena and has this game story.

Preps: A couple of North Side schools won state titles yesterday, Mt. Spokane in volleyball and St. George’s in girls’ soccer. … Gonzaga Prep bowed out of the State 4A football title chase with a quarterfinal loss.

Seahawks: Nick Vannett has a great way to get ready for the rigors of an NFL season.

• Without a Seahawk game getting in the way, we can watch the RedZone all day. No interruptions. Man, my backside is going to get sore. Until later …