A GRIP ON SPORTS • It is here. Finally. It is the first full Saturday of college football season. Everyone plays. And everyone gets to cheer. Or moan. Read on.

• For all of you who have been sitting in your dark basement on Saturdays since December, staring at a blank screen and waiting for this day to come, you have my pity. And my understanding.

I’ve been waiting impatiently for college football to return as well. The only bad part about today, as far as I can see, is the Cougars and Huskies play at the same time. A perfect Saturday in Pullman, Jim Walden once pointed out to me, is when the Cougs win and UW loses. It hasn’t happened all that often the past couple years.

And it may not happen today, though Washington will enter the showdown in Atlanta against Auburn without its best offensive lineman. That will make it tough for the highly ranked Huskies, who are not only carrying their weight but that of the Pac-12 as well.

And the Cougars? They will have their hands full with a Wyoming team that has played – and won – a game already. Washington State is 1-5 in season openers under Mike Leach. That “1,” however, came last season.

Unless the beet juice is really powerful – I wonder if Russell Wilson will begin a startup to sell it soon? – it looks to me as if the Cougars will begin this season 0-1. The combination of a new quarterback, new offensive linemen, new assistant coaches, high-altitude fatigue and a pretty good opponent will be too much. But don’t worry, San Jose State is next. In Pullman. That’s a win.

Eastern Washington will also open with a win today. Central Washington is an outstanding Division II program but no match for the Eagles this afternoon at Roos Field. It’s too bad the FCS selection committee doesn’t differentiate. It just ignores lower-division wins. CWU might be better than a Big Sky team or two, but it doesn’t matter.

The other local teams, Idaho and Whitworth, have even tougher openers. UI plays this evening, the Pirates this afternoon.

The Vandals travel to the San Joaquin Valley to face Fresno State, a program on the rise under Jeff Tedford. And Whitworth has a lot of new faces to work in as they open the season by hosting La Verne.

It’s September. It’s a Saturday. College football is back.

• To celebrate, Larry Weir got with his radio partner on the EWU broadcasts, Washington State alum Paul Sorensen, to talk about the games for the latest Press Box pod.

• A couple of quick personal notes. As most Cougar fans know, I retired from the postgame radio show at the end of last season. The late-night strain just got to be too much.

But that window closing opened the door to another gig, one that I’ve been doing the past couple years pertaining to Gonzaga basketball. I will sit at home today and watch the Washington State game on CBS Sports Network just like the rest of you. The difference is I will be taking notes on the broadcast. And, when it is over, I’ll be offering a TV Take, a commentary on the game from the view in the living room, the same way most WSU fans experience it.

I figure as long as Dick Vitale isn’t doing the game, I’ll be just fine.

WSU: Theo Lawson isn’t on a couch. He’s in a press box. A strange press box. That always gave me anxiety. But Theo is tougher, so his coverage will be better. Guaranteed. Theo has a preview of the contest and the keys to victory. He also has his pick, which is the mirror opposite of mine. … The volleyball team is off to another hot start. … The soccer team rallied in the second half at Nebraska. 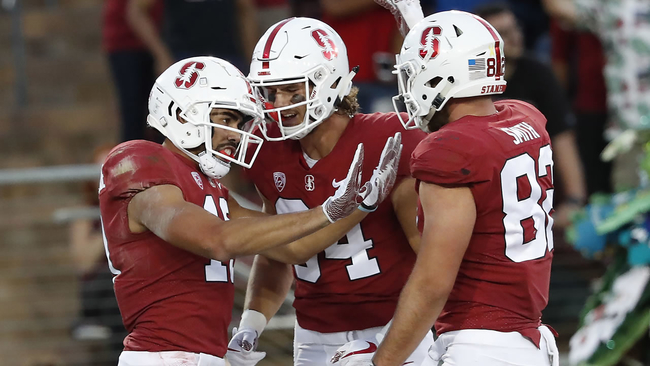 Elsewhere in the Pac-12, there were two games last night, both big wins for the conference schools. Stanford started slowly but wore down San Diego State in the second half for a 31-10 victory. … Colorado was good from start to finish in an easy 45-13 win over Colorado State. … Washington plays the most important game of the day for the conference, meeting SEC power Auburn in SEC country. It won’t be easy for the sixth-ranked Huskies. … The same can be said for Oregon State but for different reasons. Fifth-ranked Ohio State will be fired up today. … Oregon opens the Mario Cristobal era today. … California has high expectations for quarterback Ross Bowers. … USC is starting a freshman quarterback but that won’t change expectations. … UCLA has a new quarterback and a new coach. … Arizona State will have three quarterbacks who started their college career in Tempe starting for other FBS schools today. … What will happen tonight in Tucson for Arizona? … Today may be a big day for the conference, but college football’s season will end, no matter what, in Pac-12 country.

EWU: The Eagles will have to deal with Central Washington’s strong running game. That’s the focus of Ryan Collingwood’s game preview. … Around the Big Sky, Portland State opened its season last night with a blowout loss at Nevada. … Idaho State went the opposite route, blowing out Western State Colorado. … The second Bobby Hauck era begins for Montana today. … McNeese State will offer a stern test for host Northern Colorado today. … Demario Warren has given Southern Utah an identity. … Northern Arizona may actually be the favorite today. … It was a bad year for Cal Poly San Luis Obispo in 2017.

Idaho: The Vandals have struggled against Fresno in the past, which is why coach Paul Petrino is focusing on building confidence early against the Bulldogs. It will UI’s first game back in the FCS ranks. Peter Harriman has more in this game preview.

Whitworth: Though the Pirates have dominated La Verne in the recent past, it’s a new group of players who will try to keep that streak going today. Justin Reed has a game preview.

Chiefs: The preseason began last night in Everett, with Spokane routing Portland 7-1 in the Silvertips’ tournament. … The Chiefs made a trade yesterday. … Around the WHL, host Everett lost in a shootout, 4-3 to Tri-City.

Indians: Spokane is tied with Vancouver for the North’s second-half division title. It will all be decided in a three-game series in Spokane. The impasse was reached yesterday as the Indians defeated host Tri-City 4-3, propelled by a three-run home run in the eighth. … Elsewhere in the Northwest League, Everett helped the Indians with a 9-3 road win over the Canadians.

Preps: Yes, college football roars into action today. High school football did the same last night. Dave Nichols was at the Pine Bowl to watch Mt. Spokane roll past Damien from Hawaii, 42-14. … Jim Meehan has the coverage as Coeur d’Alene handed Gonzaga Prep a 28-14 season-opening defeat. … Lewiston shut out Shadle Park at Albi, 28-0. Kevin Dudley has the game story. … We also have a roundup of the other games in the area. … There is also a girls’ soccer roundup as the season began.

Mariners: We will have an Out of Right Field column for Sunday’s paper and we can give you tease of what it will focus upon. One word. Hope. … There was little early last night in Oakland, but then the M’s rallied from five runs down to tie. The A’s, however, scored twice more and the Mariners, playing without Jean Segura again, were toast, 7-5. … Mitch Haniger had a great August.

Seahawks: Who will make up the Hawks’ 53-man roster? That’s the big question today. … Can Shaquem Griffin do it in the regular season? … Earl Thomas seems to be a popular man.

Sounders: A long streak is in jeopardy today against Sporting Kansas City.

• We are going to beat our own drum here a bit and being I am tone deaf and have no rhythm, it may not be pretty. I really enjoyed doing the TV Takes after Gonzaga games and they seemed pretty popular. So we’re trying the same formula with the Cougars. Please tune in after the game. Which is a bad joke. Head back to this website and read the TV Take. That’s what I mean. Until later …