Congress could consider some comprehensive reforms of Social Security if they improve the program’s solvency and protect the benefits of retirees and those close to retirement, the Republican representing Eastern Washington voters said.

That may be an area where Democratic challenger Lisa Brown agrees more with Trump than with McMorris Rodgers. The federal government’s largest program should remain pretty much as is, Brown said.

“Making a commitment to the current system is really important,” Brown said. “Changing the rules probably would affect people’s confidence in the system.” 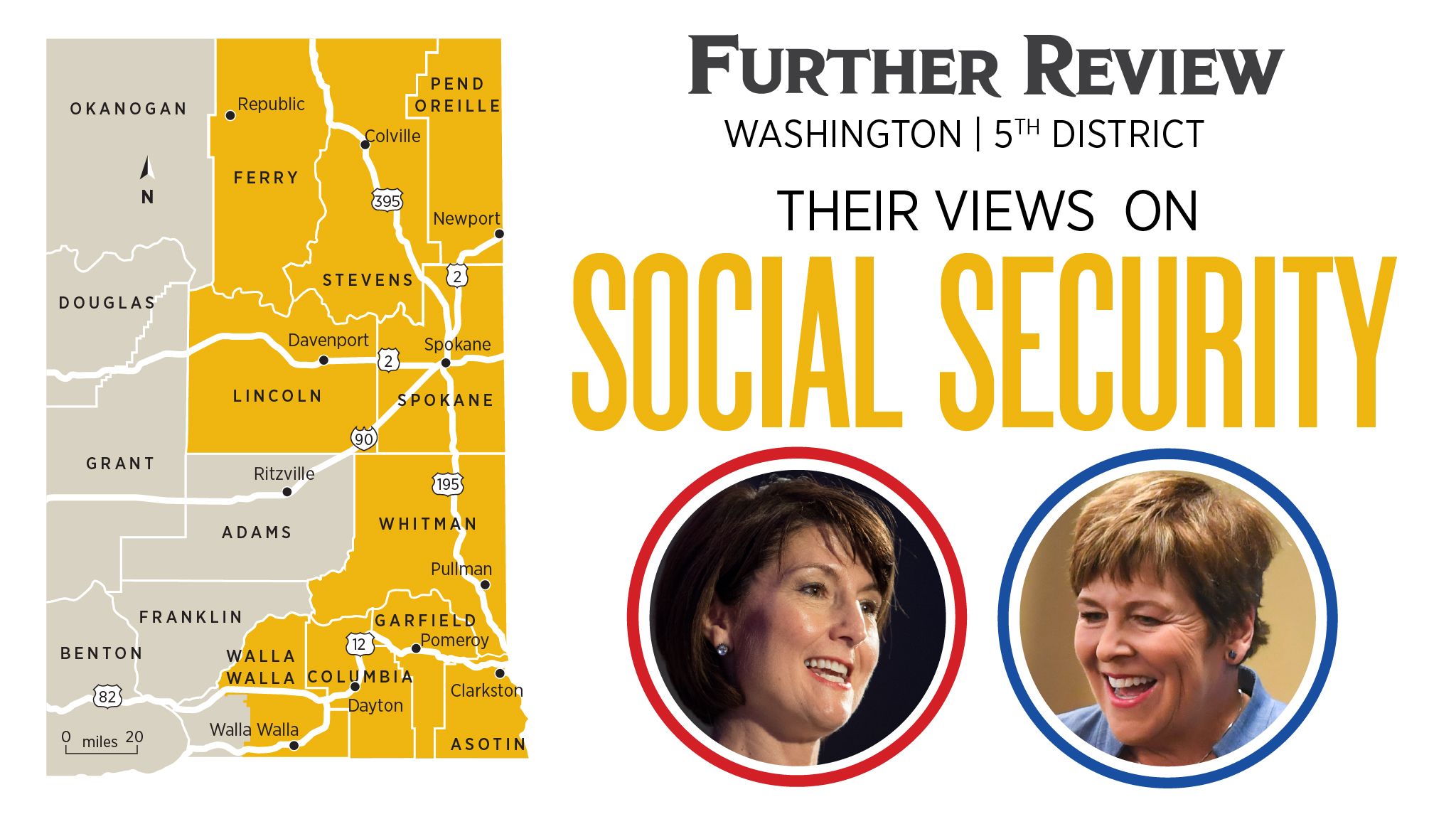 Brown’s supporters are claiming that McMorris Rodgers is out to cut Social Security, and point to the House Republicans 2019 budget proposal which calls for reductions in some social service programs. But while that budget proposal projects the Social Security Trust Fund will be insolvent by 2031, the only change it says Congress “may wish to consider” would be to eliminate a person’s ability to receive both unemployment insurance and Social Security Disability Insurance, which is separate from the larger Old Age and Survivors Insurance benefits paid to senior citizens.

Although retiring House Speaker Paul Ryan, R-Wis., has regularly called for major changes to Social Security, Medicare and Medicaid throughout his tenure in Congress, the House GOP budget proposal merely suggests something should be done about Social Security.

“This budget calls on action to solve this pressing problem by requiring the president, in conjunction with the Social Security Board of trustees, to put forward specific proposals to reform Social Security to ensure long-term sustainability,” it says.

That budget proposal has not come up for a vote in the House.

Some economists contend that as the federal debt grows each year from a combination of higher deficits and tax cuts, there will be pressure to cut Social Security and other entitlements.

“There’s no proposal on Capitol Hill to cut Social Security,” McMorris Rodgers said last week. To say there is, is “fear mongering.”

Brown and McMorris Rodgers disagree on many aspects of the program and possible changes. For example, Brown, a former economics professor and former chancellor of Washington State University Spokane, doesn’t think it is properly called an entitlement.

“I see it as a safety net program that we all pay into, and we all benefit from,” she said. “It’s a multi-generational contract.”

It is not, as some people believe, like a savings account into which a person puts money in while he or she is working and gets that money back when they retire, she added.

McMorris Rodgers contends it fits the legal definition of an entitlement: “It legally entitles an individual to benefit when they meet the minimum requirements.”

She also is worried about the solvency of the trust fund over the next two decades, noting “each year we are paying out more in benefits than we are bringing in.”

Experts say that has been true since 2010 if one considers only the amount the government collects in taxes and the total amount of benefits paid out. But between 1983 and 2010 the trust fund received more in taxes than it paid out, and that money was invested in government bonds – which some critics say was a raid by the federal government to pay for other programs. But those investments generate interest which currently covers the difference between taxes coming in and benefits going out. After 2021, projections suggest interest won’t cover the difference, although a strong economy could boost the fund.

McMorris Rodgers said the federal government should stop borrowing from the trust fund to pay for other government programs, and instead leave the entire surplus for benefits.

Brown said if the trust fund reaches a point where it doesn’t have enough money to pay the promised benefits, the federal government could shore it up with money from the general fund. “All money is green,” she said.

At certain points, federal budget writers have kept the trust fund outside of their main budget, at other times they’ve included it to make the deficit seem smaller, Brown said. It’s essentially an accounting technique, but “at no point should it result in people’s benefits not being paid.”

In looking at ways to improve the long-term financial condition of the trust fund as it sees increased demand by retiring baby boomers, experts have suggested various changes.

Congress could continue to raise the retirement age for full benefits, which for decades was 65 and is now at 66 for those born between 1952 and 1954. It will go up by two months per year until it hits 67 for those born in 1960 and beyond. Because life expectancy is longer than it was when Social Security was created in the 1930s, some argue that many people live longer and healthier and can retire later. Delaying the retirement age reduces pressure on payments from the trust fund.

Brown wouldn’t support any adjustments to the current schedule of increases to reach age 67. McMorris Rodgers said she’s undecided about that option. Raising the retirement age further might be an acceptable part of an overall package of reform, but she’d have to see how it works with other parts of the system.

An option for increasing the amount of money flowing into the trust fund is to raise the “cap” on income that can be taxed, which is set by the Social Security Administration. The SSA adjusts that many years; the current cap is $128,400, up about 1 percent from $127,200 in 2017. Wages above those level aren’t subject to the Social Security tax, although they are subject to the Medicare tax.

Brown said she supports the current way the cap is adjusted by the SSA. McMorris Rodgers said she’d look at some changes in the cap as part of an overall reform package but would not support a “significant increase,” arguing that’s a tax increase on middle and upper middle income families.

McMorris Rodgers said she’s “intrigued” by proposals to allow younger workers to place some portion of their Social Security taxes in separate accounts and have greater control over investments, but would want to see how that plan would work with the whole system. It would have to ensure that retirees and those near retirement wouldn’t have their benefits cut. But when asked how she would define who was near retirement, she said that, too, would depend on the whole package of reforms.

Brown does not support allowing some workers to channel taxes into separate accounts, saying the system should remain a safety net program for seniors.

McMorris Rodgers said she could support reducing Social Security payments to very rich individuals, if it fit with a larger reform package and didn’t affect those in or near retirement. She’s undecided about any change to the earnings limit for Social Security recipients – currently set at $45,360, up from $44,880 last year for those at full retirement age. After a recipient hits that amount, he or she has $1 of Social Security benefits deducted for every $3 in earnings above the limit. Again, it would depend on other changes, she said.

“I think we should keep the system the way it is,” she said.

While there are concerns about the high demands the baby boom generation will put on the system, the current millennial population coming into the workforce is larger, she said.

“We will continue to have demographic changes and economic changes,” Brown said. “People’s confidence shouldn’t be shaken.”

McMorris Rodgers said any talk about Social Security changes is academic at this point. There’s no proposal currently under consideration, and with Trump telling Republican leaders he won’t sign any changes, there won’t be one before 2019 – at the earliest – when a new Congress is seated.